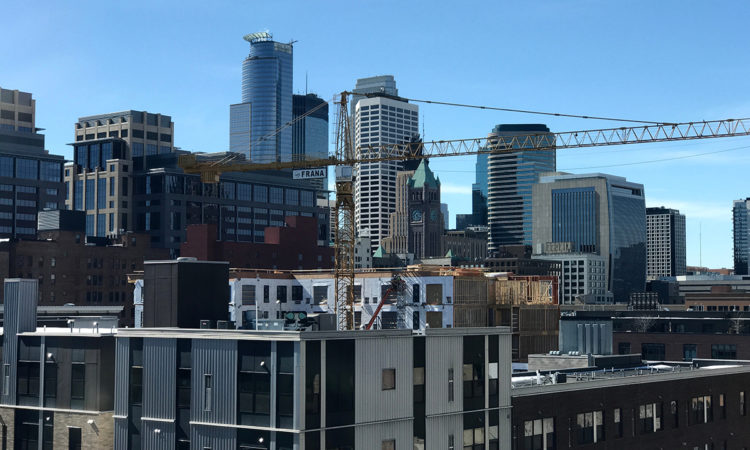 Minneapolis still had a “very robust” year in development, despite the Covid-19 pandemic, one city official says. Jeff Bukowski / Shutterstock.com

Despite the pandemic, the city of Minneapolis saw no shortage of construction cranes in 2020.

The dollar value of building permits in the city for 2020 hit nearly $1.8 billion, according to data compiled by the city’s Community Planning and Economic Development (CPED) department.

The total value of permits in the city was down 17.4 percent compared to 2019, which was a record year for the city. Although down from the previous year, the 2020 tally ranks as the fourth highest for the city since 2010.

Six of the 10 largest projects in the city last year were large apartment developments, continuing the trend of recent years.

“2020 was still marked by a lot of large apartments,” said Steve Poor, director of development services for CPED. “It was still strong growth in apartment buildings. … Considering some of the challenges, 2020 was still a very robust year in development.”

Building permit values reflect the cost of construction, but not the total project costs.

The single largest project for the year was the RBC Gateway tower which will feature office space, a hotel, condos and some retail space. The multiyear project had $175.5 million in building permits just for the year 2020.

“This the second tranche of permits, if you will, on the Gateway project,” said Poor.

Looking to the year ahead, Poor sees many more multifamily projects based on what the Minneapolis City Planning Commission has approved.

“They approved over 6,000 dwelling units again in 2020,” said Poor. “That’s slightly less than the year before, but that’s still a large number.”

This is the annual building permit value for the city of Minneapolis since 2010, per CPED: