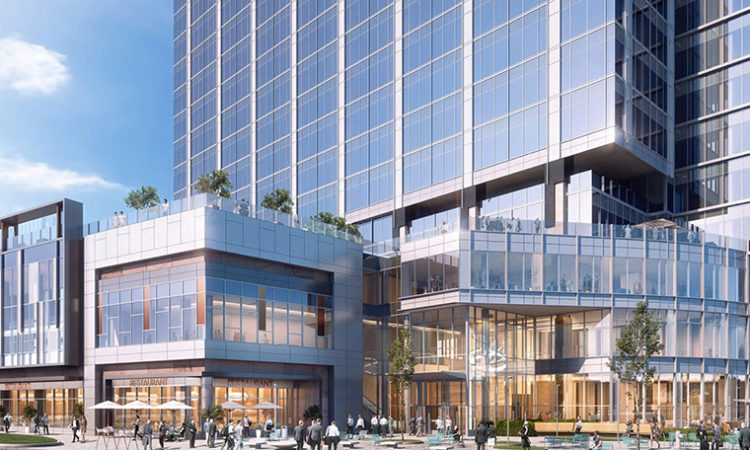 It’s been a long and winding road to redevelopment of the Nicollet Hotel block in downtown Minneapolis. The site has been an empty eyesore at the north end of the Nicollet Mall for nearly three decades. The city of Minneapolis had owned the site, which has been used as a surface parking and bus layover lot, since 1993. Several previous efforts to get the block redeveloped had gone nowhere.

But on Tuesday, Minneapolis-based developer United Properties held a ceremonial groundbreaking for the 34-story RBC Gateway tower which will combine Class A office space, a Four Seasons hotel and luxury residential units. (Technically, RBC Gateway will be 37 stories, counting three floors dedicated to building equipment and mechanicals.) Minneapolis Mayor Jacob Frey was among the attendees.

The event also brought news of a significant new tenant for the tower: Minneapolis-based Pohlad Companies announced plans to relocate its offices to RBC Gateway in early 2022. The Pohlad organization will occupy 96,000 square feet of space on three floors of the building. Pohlad Companies is the owner of project developer United Properties.

Pohlad entities slated to move to the new building include the Minneapolis office of United Properties, the Bloomington office of NorthMarq, the corporate office of the Carousel Motor Group, Pohlad Family Foundation, Pohlad Investment Group, Marquette Companies and CRP Holdings.

It’s been four years since the city awarded exclusive negotiating rights for the property to United Properties. The developer’s initial vision called for combining approximately 300 apartment units with a hotel, once slated to be a Hilton. United Properties acquired the site from the city of Minneapolis last week for $10.4 million; the deal closed on June 11.

In November 2018, United Properties told city staffers that it had hammered out a term sheet with Toronto-based Four Seasons Hotels Ltd. for the mixed-use project. The Four Seasons will be the city’s first-ever five-star luxury hotel.

The 1.7-acre site is bounded by 3rd Street South, Hennepin Avenue, Washington Avenue, and Nicollet Avenue. City planners still call it the Nicollet Hotel Block even though the hotel was demolished in 1991.