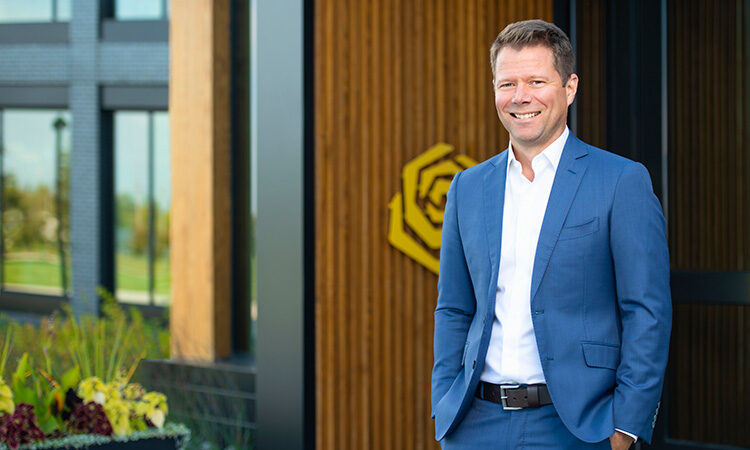 Marvin, the Warroad-based company lauded by President Obama for avoiding layoffs during the Great Recession, intends to make huge investments in automation.

But Paul Marvin, CEO and chair of the window-and-door manufacturer, is quick to explain that nobody is going to lose a job because of automation.

“We are not going to build a factory of robots. That’s not appropriate,” said Marvin, a fourth-generation family member who is leading the company that was founded in 1904.

“Automation is simplifying processes with technology and data,” Marvin said in an interview with TCB. Automation and technology upgrades are central to a five-year business strategy that Marvin has begun to unveil to his employees.

Marvin will conduct 41 employee meetings between mid-January and early March across several states. “Everyone has a right to know that we have a plan and what it is,” Marvin said. “I’m looking forward to hitting the road and walking the floors and being with our employees.”

While recent years have been characterized by what Marvin labels “phenomenal growth,” he said that rapid expansion “exposed some stressors.” Across-the-board, he said, the company needs to examine its operating platforms and systems and make strategic investments in newer and better technology.

“What got us here isn’t going to get us to where we need to be,” he said, emphasizing that a major investment will be implementing a new Enterprise Resource Planning (ERP) system. “It is the backbone,” he said. “It is the system by which all aspects of the company communicate, plan, and produce.”

Other important systems—including pricing, financial, and production scheduling—will be assessed based on how they would integrate with the new ERP and whether they should be replaced to increase effectiveness of business operations.

On Wednesday, the Marvin company announced that it had hired Rick Johnson to become its inaugural chief digital officer. Johnson, who is exiting the Marvin board of directors to take on this position, will “oversee the design of Marvin’s future-state enterprise technology and digital strategy, as well as its data and analytics initiatives,” according to a Marvin news release. Johnson has served as chief information officer for Sonoco, a South Carolina-based packaging company.

Paul Marvin said the company wants to deploy automation to reduce redundant work or busy work, so it can make faster and better decisions. For example, that could be the case in manufacturing, finance, or marketing. More and more businesses have begun exploring automation for similar purposes. Minneapolis-based construction giant Mortenson, for instance, in late 2022 rolled out new automated technology designed to free up workers for other tasks.

“Robotics is a type of automation,” Marvin said, and he can envision robots doing repetitive and somewhat risky work within factories. “This isn’t about replacing people,” he said. However, he noted, with a “skilled labor shortage, especially in manufacturing,” it makes the most sense for Marvin employees to do the types of work where they add the most value and can leverage their years of experience.

Warroad, a small community in northwestern Minnesota near the Canadian border, enjoys a national reputation for producing Olympic and professional hockey players and for making high-quality windows and doors.

For many decades, Marvin has attracted workers to its Warroad factory from its base within Roseau County. People from surrounding counties also have commuted to Warroad to work at Marvin.

But Paul Marvin reported that his company is short of workers in Warroad, which has “triggered all kinds of strategies and initiatives focused on hiring, retention and process optimization,” he said. “It greatly affected our production in 2022 as well as in 2021.”

In conjunction with other organizations, Marvin said, his company is involved in a “community-wide effort to add 300 housing units in Warroad and a new daycare center.”

Marvin is also among the leaders of a downtown rejuvenation project, which will redo an entire city block that will feature commercial, retail, and residential spaces.

“We’ve been headquartered here since my great-grandfather got off the train over a hundred years ago,” Marvin said. “Strategically, we need Warroad to be vibrant and to be a place where we can continue to be headquartered and attract the labor that we need. It’s been a tough couple of years in that regard.”

When the late William “Bill” Marvin, a second-generation family member, was growing the company, Warroad’s facility was its centerpiece. But the company now reports that it has about 1,800 employees in Warroad, while about 1,900 people work at Marvin facilities in Fargo and West Fargo in North Dakota.

In 2022, Marvin said, the company moved production of its upscale Modern windows and doors to Fargo. While he stated the Modern line was “incubated in Warroad,” the move to Fargo occurred because the business needed more manufacturing space.

Marvin employees are spread across 16 cities in North America. The manufacturer has been doing business in areas defined by low unemployment and high inflation, which prompted Marvin to boost wages.

“We have made what I’d call out-of-cycle, cost-of-living adjustments to wages, including starting wages and all wages,” Marvin said. “That has a cascading effect when you raise a starting wage, then you adjust wages throughout the operation.”

During the past two years, Marvin increased starting pay in every geography where it does business. Those increases ranged from 50 cents to $2 per hour.

In addition to Warroad, Paul Marvin said the company has faced a shortage of workers in Grafton, North Dakota. Grafton is a small regional center northwest of Grand Forks, North Dakota. About 400 Marvin employees work in Grafton.

At the beginning of 2023, Warroad and Grafton employees were given a 50-cent hourly pay raise, and they’ll also get “a merit increase based on performance during the spring performance review cycle,” according to a company spokesperson.

Beyond increasing labor costs, Marvin has been dealing with inflation’s effect on the cost of its raw materials. “Our challenge in a made-to-order business is to try to predict rising prices of inputs to make sure that we appropriately adjust our market pricing, while still remaining competitive and providing the right value proposition in the marketplace,” Marvin said. “But you can’t do that perfectly.”

Girding for an economic slowdown

During 2021 and 2022, Marvin said that his company had strong customer demand, so initial interest rate hikes by the Federal Reserve “had little to no effect.”

But cumulative actions by the Fed have altered economic projections across the U.S. economy. “As we head into 2023, the rising mortgage rates are real, so what it cost people to finance a new home in July or August of 2022 is drastically different for that same $500,000 home today,” Marvin said. “That will have a constricting effect on both new construction and to a lesser degree replacements [of windows and doors] to existing homes.”

In late December, the National Association of Home Builders said that federal data showed new home sales were down 15.2% on a year-to-date basis through November. In Minnesota, 2022 home sales sunk to an eight-year low.

“Our operational plans are based on a potential slowing” of the economy in 2023, Marvin said. However, he anticipates an “outsized performance” this year in the sale of replacement windows and doors. That business is supported by many people who choose to stay in their homes and have the financial means to make improvements.

“That’s a nice balancing effect with new construction,” he said. “We have made significant investments to gain even more share in the replacement segment.”

If there is a mild recession, Marvin expects his business will be affected by it. But in a broader context, he points out that the market for housing is “terribly undersupplied in this country.” He predicted it will take several years to address the “unmet demand for housing, both new and existing.”