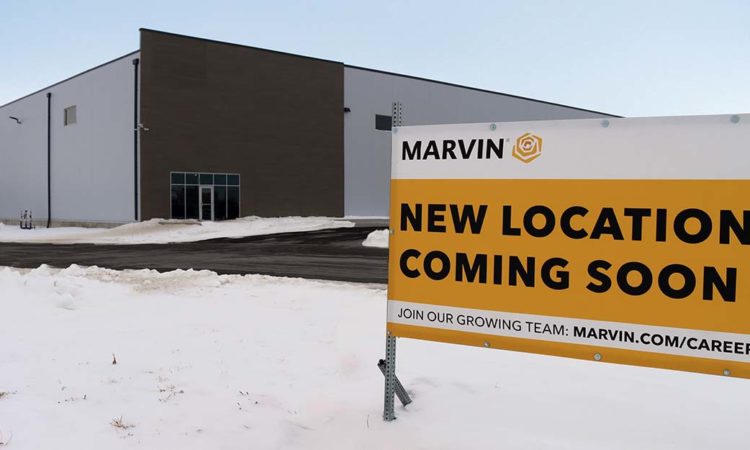 The manufacturer will create about 150 jobs this year at a new distribution center and an additional plant.
By Liz Fedor
January 13, 2022

Less than a month after awarding $10.4 million in profit-sharing to its employees, Marvin on Thursday announced plans for an ambitious expansion to its operations in Fargo.

“We’re very pleased to have secured additional space in the Fargo area to meet demand while continuing to grow the business in a thriving community,” said Darrin Peterson, Marvin president, in a prepared statement. “Our story is a story of growth, despite the challenges we faced in 2020 and 2021.”

The family-owned company that is based in Warroad, Minnesota, already has a substantial presence in North Dakota. The company employs more than 1,700 people at six existing facilities in Fargo and West Fargo.

Both of the new Marvin facilities in Fargo will be leased spaces. However, they were not previously occupied prior to Marvin’s build-out, and they will be built to Marvin specifications.

“The new manufacturing facility will produce the Elevate and Essential Collections and Ultrex pultruded fiberglass, along with additional lines as needed to meet demand,” according to a Marvin spokesperson.

Shortly after the pandemic caused lockdowns in March 2020, orders for Marvin windows and doors fell by 15 to 25 percent. CEO Paul Marvin instituted temporary furloughs, but the company avoided layoffs and its full workforce was in place when the market for home products quickly rebounded.

Now Marvin is competing with other employers to secure the workers it needs to meet consumer demand for its products, which has remained strong as many Americans remain at home for all or part of their work weeks.

In its announcement Thursday, Marvin said that it is “actively hiring” at all of its Fargo-area locations and increasing its starting wage in Fargo to $20 an hour.

The company also said: “Marvin employees are now also eligible for company benefits beginning on their first day of employment, without a waiting period, including healthcare, 401(k) match, profit sharing and more. The company looks to welcome an additional 300 or more employees in 2022 as demand for Marvin offerings continues and product innovations evolve.”

The Conference Board, a nonpartisan think tank, said Thursday that the No. 1 concern of U.S. chief executives in 2022 is labor shortages. In its survey, rising inflation came in second, followed by supply chain disruptions and Covid-19 concerns.