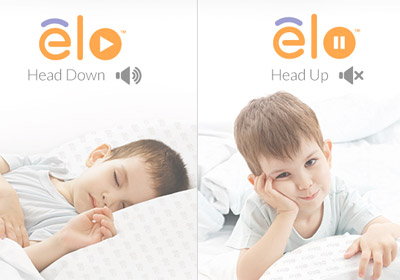 Killian Rieder’s “Elo” pillow is equipped with speakers that play music or tell children’s stories, but only when the child’s head is resting on it.
May 25, 2014

Made in Minnesota, the Elo Sleep System is a pillow embedded with speakers and a wireless device on which parents can load children’s stories or music. The catch: the music or story only plays when the child’s head is down on the pillow; when they lift their head, the sound stops.

“When my daughter was two, she was taking one to two hours to be put to bed each night,” said Rieder. “To help her sleep, I would stand behind her and pretend she had a magic pillow that would read her stories but only when her head was resting. It worked so well and she fell asleep so much faster that I thought, hey, this could be a business.”

Rieder was featured in Twin Cities Business in 2011, when she won an Ernst & Young Entrepreneur of the Year award for Chamilia.

The Elo will debut in Minneapolis at Sleep 2014, the annual meeting of the Associated Professional Sleep Societies, at the end of the month. The five-day meeting focuses solely on sleep medicine and sleep research.

Rieder said the product will become available for pre-sale June 1, but won’t be ready to ship until late July. Although Elo will initially be sold exclusively online, at theelo.com, Rieder said the company is in talks with retailers like QVC, Target, and dozens of small stores that are interested in selling the product.

“The beauty of the product is it can be sold in almost any retail store, from Barnes & Noble to Bed, Bath, and Beyond,” Rieder said.

All the children’s stories and music are bought at theelo.com and then uploaded from customers’ computers or phone onto the pillow. Rieder said the company partnered with Scholastic and Macmillan for the stories and has classics like Curious George but also original stories written specifically for Elo.

“We hired authors to write stories for us because we wanted more stories that children could understand without any pictures to help tell them,” Rieder said. “And they had to be easy enough for a 2- to 8-year-old to understand, which is our main demographic right now.”

Rieder said the greatest misconception she’s heard about her product is that it may displace parents’ time with their kids before bed.

“It’s not meant to substitute the parents by any means; we want the normal bed-time routine,” Rieder said. “But sometimes they just don’t want to lay in their bed and this pillow has made it such an easier process at night. It’s not meant to take the place of mom-and-dad time before bed, just help with the transition—just cut the time down that it takes the kid to relax and go to sleep.”

Rieder said the company plans to release an updated version, Elo 2.0, in November. The next-level pillow will allow parents to record their own voice for the stories.