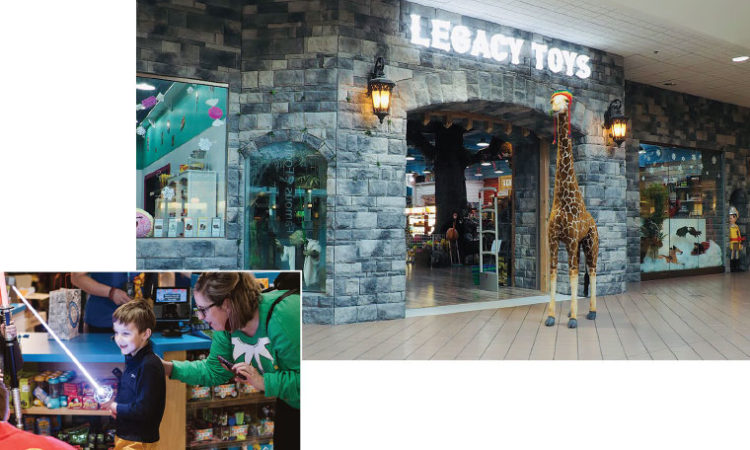 This article appeared in the April issue of Twin Cities Business magazine.

If you didn’t catch the name above the door, you might think Creative Kidstuff was resurrected from among the mountain of retailers that bit the dust in 2019. Legacy Toys, another Minnesota-based toy seller, took over CK’s Galleria and Ridgedale storefronts last year, did very little to change them, and stocked the familiar spaces with many of the same brands that have a similar focus on tactile and imaginative play.

It’s no coincidence. “They were the inspiration for why we started up north,” says Brad Ruoho, founder of Legacy Toys, which also has stores in Ely, Duluth, and Fargo. Ruoho’s concern that his three daughters were growing up glued to screens prompted the first Legacy store in 2014. Ruoho once owned an IT company, but admits that the tech business can be tough in northern Minnesota. He says he always wanted to get into a business where he could build a platform to grow and expand. He had just signed a lease at Mall of America in 2019 when he learned Creative Kidstuff was going out of business. “I thought, oh, there’s a new opportunity here.”

Business has been steady, even in traditionally slow post-Christmas months, Ruoho says. So why does Legacy seem to be thriving when Creative could no longer make it work?

“We try to create experiences people are not used to seeing,” Ruoho says. His Duluth store features 25-foot-tall trees and animatronic dinosaurs. In Ely, there’s a giant iguana tank. At MOA, Ruoho built an interactive sandbox. He says he would have snapped up Creative Kidstuff’s St. Paul Grand Avenue location too, but the rent was too high. “The malls were more willing to work with us—they know we draw crowds.”

Perhaps Legacy’s advantage is that Ruoho does much of the work himself, from building out spaces to buying merchandise. There are no direct-mail catalogs or big marketing budgets. Legacy recently closed its Ely warehouse in favor of shipping e-commerce orders out of its MOA store.

Target and Wal-Mart reported weakness in holiday toy sales, but specialty toy stores are bouncing back, says Steve Pasierb, CEO of the Toy Association trade association. “It’s a tough business that requires a lot of time and attention, but those that are doing a good job are opening new locations.”

This story appears in print with the headline: More Creative Than Creative?