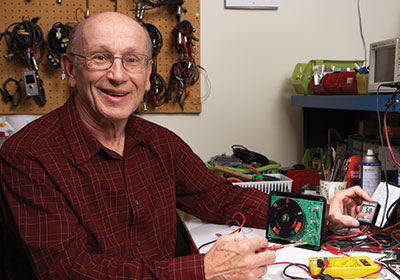 In the early 1980s, Steve Baumann received a job offer from 3M that perfectly matched his engineering experience. But he turned down the Fortune 500 giant to stay with Vexilar, which makes marine sonar products—fish finders, depth finders, underwater camera systems and related items for the fishing and boating markets. If you knew the company back then, you’d have wondered whether Baumann had made the wrong decision.

It was in 1977 that he first joined Vexilar, then a small company traded on the local over-the-counter stock market. Business wasn’t good. Vexilar filed for protection from creditors under Chapter 11 of the U.S. Bankruptcy Code in 1979 and was ultimately bought by a Florida investment group. Baumann and fellow employee Skip Christman tried to stay focused on day-to-day business amid the uncertainty.

“The new owners of the company showed up and said, ‘Well, we fired everybody else,’ ” Baumann recalls. “They said, ‘Here’s the new key. Don’t let any of the old employees in.’ ” In 1986, the out-of-state owners offered to sell what was left of the company to Baumann and Christman.

“We bought it cheap,” Baumann remembers, noting that the company’s annual sales were in the range of $250,000 to $300,000. Christman died unexpectedly in 1995; Baumann later bought out three smaller investors in the company.

Times have improved, to say the least. Baumann is expecting sales of about $10 million for his company’s current fiscal year, which ends in May. The company is profitable and has rarely lost money since 1986. And Vexilar’s products are available in major retailers, including Cabela’s, Gander Mountain and Mills Fleet Farm.

One basis for Vexilar’s success has been its focus on ice fishing, which the company began in 1990. The company’s sonar units allow customers to see the depth of their bait and the proximity of approaching fish. “Once they’re set up—the holes are drilled, all the commotion is done—they focus on our product. It’s giving them feedback constantly. … It’s their little friend sitting there telling them what’s going on,” Baumann says. Vexilar’s ice-fishing products include the Genz Pack, a box designed to hold Vexilar’s sonar units and accessories. It’s named for St. Cloud-based ice fishing expert Dave Genz, a longtime user of Vexilar’s products. Genz is a stalwart fan: On a recent trip to Toronto, he met some fishermen who had been using the same Vexilar units for decades. “They’ve had these units for 25 years or more. It’s just amazing how durable they are,” Genz says. “They just do a great job. They last forever.”

Now Vexilar is rolling out a new gadget, called Sonarphone, aimed at the summer market. The device has a water-activated transmitter that allows users to call up sonar charts on their smartphones or tablets, whether they’re in the boat or onshore.

Baumann is well respected in fishing circles. In 2012, he was inducted into the Hayward, Wisc.-based Fresh Water Fishing Hall of Fame for his contributions to the industry. He has been able to make those contributions in part by bringing an old-school, common-sense approach to running his business. He’s focused on keeping his overhead low, knowing his customers and their needs, providing reliable service and maintaining an obsessive attention to detail.

“Everything in the system is tested here before it ever is put in a box and shipped out. So we’re very hands-on that way,” Baumann says. “I’ve determined that service is not a profit center for Vexilar. It is promotion, promotion, promotion.”

If you’re still wondering why Baumann didn’t bite at 3M’s bait back in the 1980s, the answer might be that he seems to be a natural entrepreneur. In 1982, when the fate of Vexilar was still uncertain, he and Christman started an evening side business, Motor Clinic, to repair electric trolling motors for boats. “We weren’t businesspeople. We said ‘If we’re going to fail, let’s fail on a small scale,’ ” Baumann says. “This Motor Clinic was a night job, but it taught us some lessons on what it takes to operate even a small business.”

Motor Clinic, a separate company from Vexilar, remains in business today. Another Baumann company, AWC Distributing, distributes Salmo fishing lures, which are made in Poland. All three companies share space in a Bloomington warehouse; like the down-to-earth Baumann, the building is nothing flashy. His pragmatic approach to life and business can be traced to his roots in southwestern Minnesota.

“I grew up on a farm and you had to learn how to fix things and make things work,” Baumann says. “Most of it is problem-solving, all the way up and down the line. It’s ‘How do you solve this issue? How do you make this better?’ ”