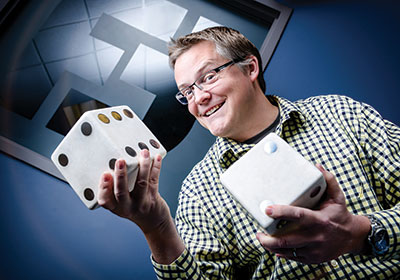 A clean-cut gentleman who dresses business-casual, Christian Petersen probably wouldn’t strike you as a vanguard gamer. He seems a little too . . . well, normal.

Don’t be fooled. During the last two decades, Petersen has built an empire of sophisticated board, card and role-playing games, which are today concepted and designed by his staff in Roseville—and played throughout the world in 30 different languages. His games have also been featured on The Big Bang Theory, the hit CBS sitcom that focuses on a group of geeky dudes.

Petersen does seem to have a great sense of timing. His Roseville-based company, Fantasy Flight Games (FFG), licensed J.R.R. Tolkien’s Lord of the Rings, developing board and card games based on the books, just before the blockbuster films came out. The company also licensed the Game of Thrones brand well ahead of the wildly popular HBO series, which was “delivered to us on a platter,” as Petersen describes it. Those deals set the stage for obtaining rights to Star Wars, which some have called “the crown jewel of geek culture,” he says.

Video gaming gets most of the media attention, but “analog” games have been winning plenty of playtime, too. Industry research firm NPD says sales of “strategic trading card games” were on track to grow upwards of 20 percent in 2013. That growth was driven largely by new releases from Magic: The Gathering and Pokemon, the dominant market players, which are FFG competitors; but their success drives traffic to the specialty shops that stock these games. This traffic ultimately benefits FFG, Petersen says.

It hasn’t been all fun and games, however. Petersen founded his company as Fantasy Flight Publishing in 1995, with the goal of bringing a popular overseas cartoon book series to the U.S. market. “Unfortunately, the books sold terribly,” he recalls. Forced to shift gears, Petersen looked to his own life: He once owned a firm in Denmark (where he grew up) that imported U.S. board games, of which he himself was an avid player. Perceiving a void in the U.S. market for large-scale, conceptual games, Petersen and his staff created Twilight Imperium, which he describes as a “big, giant, space-opera kind of conquest and science fiction game.” Fantasy Flight Publishing became Fantasy Flight Games, focusing on card and board games primarily with sci-fi and medieval themes.

FFG now has about 900 products, which include both games and accessories, and sales have grown by more than 30 percent annually for more than a decade. Revenue is split about evenly between proprietary products and licensed titles. FFG’s games are sold in roughly 3,000 shops worldwide, which account for 90 percent of sales, although products have appeared in mass retailers like Target and Barnes & Noble. About half of FFG’s sales are outside U.S. borders, but “we think we’ve only reached the first stage of international growth,” Petersen says, citing swelling demand in China, England, France, Germany and elsewhere.

Mike Webb, vice president of marketing at Baltimore-based Alliance Game Distributors, which bills itself as the nation’s largest hobby game distributor, says that the Minnesota game company has “a really good eye for what hits on all cylinders for our target audience.” Webb, who has done business with FFG since the company’s inception, adds that “the industry as a whole, since they came on the scene, has seen a dramatic improvement. It raised the bar across the board in terms of quality.”

One of Petersen’s biggest challenges now is managing a growing staff without infringing on its freewheeling creative culture. “In a very small company, you can sell the vision to everybody on a daily basis, and everybody’s in there with every victory, every downturn,” he says. As FFG’s staff grows, it’s difficult to provide the creative freedom FFG thrives on while also administering more mundane policies.

Another ongoing challenge for any game company is constantly improving the gaming experience. Gamers “want new, better, and higher-quality, more progressive innovation,” Petersen says. “What was good enough five years ago is not even close to good enough today.” While most FFG products are manufactured in China, Petersen recently added a “print-on-demand” division to publish smaller-run, custom games in-house and adapt to consumers’ evolving demands.

In 2013, FFG spent more than $1 million to renovate a new 92,000-square-foot office and warehouse building and consolidate its team, which was previously split among two locations. It also opened a 14,000-square-foot “games center” featuring a restaurant, retail space and gaming tables. “Having a place where you can have great food, play these games and meet other people is a critical factor in growing our industry,” Petersen says. And that’s no fantasy.