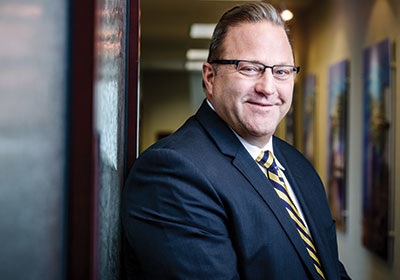 No doubt about it: Tony Belden is a competitor. “The fun part for me is winning,” says Belden, CEO and president of Engineering America, an Oakdale-based installer of large tanks for storing water and other liquids. He was a three-sport varsity athlete at Armstrong Senior High School in Crystal and a special-teams captain on the University of Notre Dame football team. You can see that drive when he’s pumping up his team of installers at weekly company meetings. “I’m the head coach of the company,” Belden likes to say.

But it’s not about winning for winning’s sake. “Winning as an organization—being able to provide food, shelter, and clothing for 55 families—is very rewarding,” he adds.

Engineering America, which is 100 percent employee-owned, is an authorized dealer of storage tanks produced by Kansas-based CST Industries. These tanks feature a porcelain enamel coating; according to Belden, they are designed to last longer than a standard welded tank, and can be sold at a premium price based on their durability. The tanks are particularly well-known in rural areas, where they’ve been used on farms for years. In 2000, the company averaged 15 to 20 tanks per year; in 2013, it’s projecting 70 to 80 tanks. All told, Engineering America has installed more than a thousand municipal, rural water and industrial liquid-storage tanks.

Belden has been the head coach at Engineering America since 2000, when one of the original owners retired. “The appeal of the business was there was a big-ticket item that could be sold in the municipal market,” says Belden, who had been the company’s vice president and sales manager. The original owners “did not want to take on this risk at the stages of life they were in,” he adds. They were in their mid-60s and ready to retire. A new, younger team was eager to take the field and make some plays.

Shortly after the new owners took over, Engineering America was approached by CST and asked whether it was interested in taking over the Colorado territory, which had lackluster sales. It was, and the deal became the first of several acquisitions. Engineering America currently does business in 19 states.

Two years ago, Engineering America added a somewhat lower-cost product from CST—tanks using epoxy finishes rather than porcelain enamel coatings. “This allowed us to go into more industrial markets where the customer has a tendency to buy on price,” Belden says. This move helped open up a big new market for Engineering America—on the “black gold” rush in the oilfields of North Dakota, where the company installs tanks for oil, natural gas and wastewater. “That has given us substantial growth in the past two years,” Belden says.

That growth also is driven by service. “Their responsiveness is very good,” says Chris Bryan, a group manager for St. Paul-based architecture and engineering firm TDKA, which has done several projects with Engineering America. “They respond to issues and questions in a timely fashion. And I don’t get that from all of my [vendor] representatives.”

Not every play that Engineering America has tried has worked. In 2007, the company saw an opportunity to expand into materials handling—installing tanks for dry product conveying and storage. It seemed like a well-calculated risk.

But “a lot of things went wrong, and we couldn’t capitalize and grow that division,” Belden recalls. The company won two large contracts, but both “went sour, probably for a lot of reasons,” he says. One of those reasons: Engineering America didn’t have the right people on staff to address the requirements of dry storage. Belden also describes the customers as challenging. One thing led to another, and Engineering America found itself “into some litigation.”

Luckily, “that risk didn’t put us under,” Belden says, though it did cost Engineering America “a lot of money.” Like many a good football coach, Belden decided to return to a back-to-basics game plan, dropping that division and returning the focus to liquid storage. As it turned out, the materials-handling difficulties had a silver lining—it introduced Engineering America to a new dealership territory, in Arizona, that was available for purchase. The company was able to borrow the money to buy it, “even though we had this gray cloud over our head,” Belden says. Engineering America ended the litigation favorably; three years later, it acquired one more new dealership in Oregon, serving the Pacific Northwest.

“Our goal is to double in the next five years,” Belden says. It’s an aggressive strategy, one that may include territorial expansion, additional acquisitions and more emphasis on maintenance services for existing tanks. “There’s a lot of opportunity [for the service division] because we have such a big territory,” Belden says.