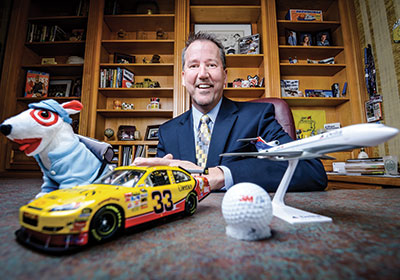 “We have three service lines: people, process and technology, each of which contributes 30 to 35 percent of revenues,” Olsen says. “Staffing is like finding the fish and bringing them to our customers. Workforce processing administration is when the customer finds the fish and just wants us to season and cook it right and deliver it to them. Our technology allows us to manage the workflow end to end. We can find ’em and [serve them up], or we can manage the suppliers that are in the fishing tournament.”

In other words: Dahl Consulting can find and qualify specialized business contractors and manage the entire contracting process—or it can manage the contractors that the client finds on its own. “It’s like we’re managing the fishing tournament and other people are providing the fish,” Olsen adds.

This particular fish story begins in the basement of IT consultant Kathy Dahl’s Woodbury home in 1993. Once upon a time, Dahl focused on providing technology consultants to her two largest clients, 3M and its spinoff Imation. In 1997, she brought in Olsen, a business development director at a downtown Minneapolis temp-services company, to help build out a broader agency. A month later, she made him a partner. While the company continued to have a strong IT focus, it also began supplying contract workers with expertise in numerous other categories, including accounting and finance, human resources, marketing and administrative areas. The breakdown is about 70 percent IT, 30 percent non-IT.

In 2000, Dahl Consulting began offering workforce solutions to help clients with managed services and vendor management—basically, managing contract staff for the client. “We would go on-site and manage the whole process of the contract labor program using other people’s software,” Olsen says. A couple of years later, the company won a major contract with Target, a deal that helped more than quadruple Dahl’s revenue over the next two to three years. “It took us from the backyard and put us on the map nationally and even internationally [in Canada],” Olsen says.

Dahl’s most recent milestone came in 2009 when it developed its own management software to automate the requisition process for suppliers, consolidate invoicing, and track contractor hours, approvals and spending reports. It also tracks the whole workflow and process of procuring contractors, including on-boarding and off-boarding employees, spending by project and supplier, and other measurements. “It was a big risk,” Olsen acknowledges. “We could have continued to buy third-party software, but we saw [our proprietary software] as a competitive advantage. It was a game-changer because it allowed us to branch off into other things, like managing and measuring a client’s workforce to see who might qualify for health care, come Jan. 1, 2014.”

Dahl Consulting started using its software a year after facing one of its biggest crises—the bankruptcy of a middleman firm that had used Dahl’s staffing services for Fortune 100 companies. Dahl had supplied the staffers; the middleman managed the relationship with the client. When the other firm went out of business, Dahl wasn’t paid.

“We could have spent a lot of money on bankruptcy lawyers and chasing bad money,” Olsen recalls. “We opted to cut our losses. We lost money [$300,000] like everyone else, but we also didn’t have to pay hundreds of thousands of dollars in legal fees. We just moved on.”

Dahl Consulting’s banker, Steve Heinen, agrees that developing its proprietary software was a risk worth taking. “Ken has made sure that Dahl provides the value-add that another company might not,” says Heinen, a vice president in U.S. Bank’s commercial banking group. “The proprietary software would be a good example of that. They went out and saw what their clients needed and then developed a product to meet that specific need that ties those clients back to Dahl.”

Dahl has a database of more than 30,000 consultants in 35 states, Canada, India and the United Kingdom. Kathy Dahl phased herself out of day-to-day operations around 2009 but continues to function as chairman of the board and communicates with Olsen nearly every day. There are approximately 700 Dahl consultants engaged on client projects at any given time.

The meetings between Olsen and Dahl apparently go pretty well: Dahl Consulting cracked $100 million in revenues at the end of 2012 and saw another 10 to 20 percent growth in 2013. By way of comparison, “when I started, we had about $500,000 in revenue,” Olsen says.

Olsen grew up in Mountain Iron, on the Iron Range, and he seeks to instill “a small-town family feel here, even though we’ve grown and become larger. We’re good listeners and we work had at servicing our customers. Target told us that they picked us over major competitors because they felt we were easy to work with and easy to get along with.”