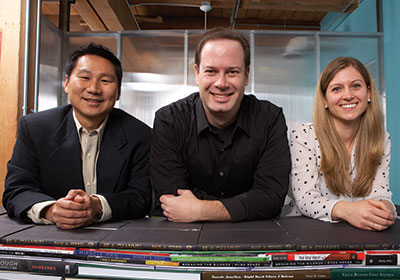 Mark Levine wrote the book on self-publishing—literally. Titled The Fine Print of Self-Publishing and, yes, self-published, he used it as a way to connect with the customers of Click Industries, an online business filing company he founded and led. That was in 2004. “I had no idea it would spawn a publishing company,” he recalls.

The response to the book was so positive that he decided to do just that, however. “I knew what every other self-publishing company was doing, so it was easy to come up with a different, slightly more author-friendly model,” he says. He founded Mill City Press in 2006 and offered authors the option of 100 percent of all royalties their books earned.

“We were the first company ever to take the position that if you pay to publish your book, you should get 100 percent of any of the sale proceeds, after an Amazon or Barnes and Noble take their cut,” Levine says. “Before then, self-publishing would provide a fee, they would take a cut of the book and mark up the printing. That became a system where bookselling just wasn’t very viable.” Mill City Press makes its money via a publishing fee, which also covers all up-front costs.(For some authors, the company buys the rights.)

Mill City Press has been more than viable—it’s the keystone of a publishing mini-empire, Hillcrest Media Group, which has four divisions and has published more than 2,600 authors and 2,800 titles. It markets, prints and distributes not only self-published books, but also “traditional” and electronic books. (Levine sold Click Industries in 2009.) The company’s royalty strategy drove four years of rapid growth for Hillcrest, until it took on so many new clients it was going to burst its binding. To survive, the company had to create a back-end workflow system for managing all of its publishing logistics.

“The workflow system allows all our employees, authors, editors and contractors the ability to log into our secure network and see various versions of a book title, make comments, upload cover designs, speak with distributors, get sales reports, convert data for authors to read, and any other step that goes into self-publishing,” Levine says. “When you only have a small number of authors you can do this manually, but when you grow, that can quickly become inefficient.”

Hillcrest started work on its custom workflow engine in 2010 and spent a full year developing the system, and a couple more years making tweaks and improvements. “It was a huge undertaking; we had to get all of the knowledge out of our employees’ heads and put it into this technology,” Levine says. “But it has turned into the future of our business and transformed Hillcrest from a self-publisher to a technology company that happens to be a publishing company.”

While the workflow engine was born out of necessity, it went on to become a catalyst for even more growth. That’s not only because it allows for radically smoother communication within the company, but because Levine has now begun licensing the technology to other publishing companies through one of Hillcrest’s divisions.

“For any self-publisher to grow in scale, they need a back-end system, and there just aren’t many options—and definitely not options as complete as ours,” Levine says. “There are some that handle different bits and pieces, like just distribution, but none that put the whole process together like we have. This technology will be in such high demand that we expect the licensing fees to become our largest source of revenue going forward.”

“Self-publishing is in upheaval right now, and with all the new technology and custom publishing methods, authors are always confused and need education,” Leeper says. “And that’s where Hillcrest thrives. They’re very good at explaining, in the simplest terms, what authors need and what they don’t need—and their workflow system streamlines the whole process.”

While Levine is responsible for leading Hillcrest in the most lucrative directions since its founding, he is quick to credit his staff before himself. Levine says the workflow engine was conceived and perfected by picking the brains of every Hillcrest employee, and that the success of Hillcrest by no means rests solely on his shoulders.

“I’m really good at only two things,” he says. “The first is that I have a knack for finding and hiring the right people. The second, I suppose, is my ability to see the self-publishing landscape laid out in front of me, and see where the openings are—kind of like a running back, I can see the hole as it’s developing and rush toward it, past the competition.”