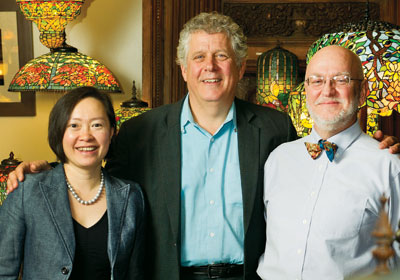 Some entrepreneurs enter business with a focused vision that burns like a flame inside them. Others find success by approaching the market with flexibility to morph and evolve toward the most lucrative opportunities.

Terry Commerford is the latter. He and his wife, Margie, embarked on what would eventually become two multi-million dollar businesses in 1983, selling stuffed animals from the back of a van, calling the business Terrybear. By 1985, they were selling stuffed toys in Eden Prairie Center, and soon added imported brass items—vases, giftware, elephants, giraffes, and other figurines—from India.

In the 1990s, the couple expanded their business to include Tiffany-style lamps, and in any given year averaged 12 to 13 retail locations. But that was the peak. “Brass giftware started to become less desirable to the public; it was going out of fashion,” says Commerford. Their ceremonial urns from India, however, had caught the attention of a pet crematory in northern Minnesota, so they decided to limit their brass imports to urns while widening other product offerings.

In need of funds to buy inventory to pitch their wares on television shopping networks, the Commerfords approached venture capitalists to raise cash, but the investment groups interpreted Commerford’s flexibility as a lack of focus given his businesses’ complex and fluid history.

Hearing that feedback, Commerford and his executive team decided it would be easiest and cleaner to launch a second business and turned to family and friends, who invested $500,000 to launch River of Goods in 2000. TV sales of imported Indian vases and giftware jumped to about $22 million in three years.

Meanwhile, the stuffed animal and urn business was becoming more focused as well. Tom Wozniak, who had been the company’s general manager, stepped into the CEO position. “I saw the opportunity in the urn business,” Wozniak says. “I had a sense then that cremation was up and coming.” Today 80 to 85 percent of Terrybear’s sales are to distributors of urns for cremated human remains. The rest are to pet crematories that work directly with veterinary hospitals.

Terrybear’s sales have increased from about $300,000 in 1998 to $8.6 million in 2009. This year, Wozniak expects total revenues to hit $10 million and the company had its first $1 million month in August. Staffing has risen from about four to 16, including three employees in China.

Today, Terrybear designs its own urns, which the company has custom-manufactured in China and India. “It’s a very competitive and dynamic industry. It’s changing very rapidly,” Wozniak says. Competition is increasing from casket manufacturers, who also see the trend toward fewer traditional burials and more cremations.

Commerford’s other business, River of Goods, found itself struggling by 2008. This business also needed to evolve—Commerford credits its recent run of success to understanding when to transition from entrepreneurial zeal to focused professional management. Under the direction of Lavina Lau, who became CEO in 2008 (she started as the company’s sourcing and product development manager in 2002), River of Goods began a major restructuring.

“We changed the focus to sourcing and product development, rather than just importing,” says Lau. River of Goods now provides sourcing and product development services—in categories including lighting and home furnishings—to TV shopping networks, catalogs, online retailers, and specialty gift stores. In any given month, River of Goods comes up with 100 to 300 designs.

Lau has added more employees in Vietnam, China, and India for a total of 20 overseas and 25 stateside. Revenue for 2011 will reach $18 million.

Commerford’s two companies, which share only one employee (the CFO), recently moved into a shared office space in St. Paul, and though synergies might surface, Commerford is wary of synergies, but keeping his options open. “We might start by getting the same garbage hauler.”