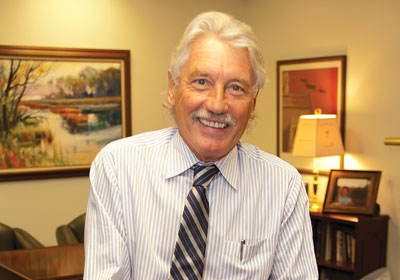 Have you ever told yourself that one day you would tell off the boss and start your own company? Boris Miksic is one of the relative few who made that angry promise pay off.

“I had a boss who was a real idiot,” recalls Miksic, founder of White Bear Township–based Cortec Corporation. “I quit in 1977, but I couldn’t find another engineering job. There was no one hiring. It seemed as though I didn’t have any other option but to start my own company.”

That’s what Miksic did, and it’s worked out well for him. From humble beginnings, Cortec has grown to a 215-employee operation with manufacturing facilities in Minnesota, Wisconsin, Canada, and Miksic’s native Croatia.

Miksic moved from his native country in 1974—a result, he says, of being blacklisted from finding work as an engineer due to his participation in anti-Communist rallies. He wound up in Minnesota. After some time in and out of the corporate world, Miksic started at ground zero.

“I began like a typical start-up: in the garage,” he says. “I rented a farm in Hugo and mixed chemicals in the garage.”

A decade and a half of slow growth saw Cortec grow to 25 employees. In the early ’90s, a benefactor in the form of a former 3M executive joined the company and helped take Cortec to the next level. Art Ahlbrecht guided the establishment of Cortec’s quality assurance program, and he applied what he knew about corrosion engineering.

“It was easy to fit into the Cortec culture,” says Ahlbrecht. “Boris always followed the 3M style of having the highest-quality product on the market—with the highest price.”

“We’ve been able to do that,” says Miksic. “If you get people to buy into these ideas, they really work hard to get there. And if you look at our top-selling products, most of them are less than five years old.”

Twenty percent growth might seem like a lofty goal, but there’s no denying that it has been happening at Cortec. Company sales have gone from $28 million in 2009 to $34 million last year to projected revenues this year of $42 million. Likewise, the number of employees has grown during that same period from 168 to 215.

Cortec has also recently put a greater focus on sustainable technologies, a move that has earned it new, sometimes surprising clients. The company recently completed a project to help the Minnesota Zoo upgrade its composting program, supplying it with Cortec’s proprietary Eco Film, a biodegradable and compostable film designed specifically for compost.

“Cortec provided the Minnesota Zoo with a generous donation of EcoFilm compostable bags,” says Tara Harris, director of conservation at the Minnesota Zoo, “and this has really allowed the zoo’s new composting program to be successful.”

The company’s main initiative for 2012 is getting a new facility in Shanghai, China, up to speed to serve its existing network of Chinese distributors. It also recently purchased one of its primary materials suppliers and folded it into Cortec.

“In the past, we’ve been able to reduce costs through global outsourcing,” says Miksic. “With the new purchasing office in China, we basically have no middlemen. We buy raw materials in India and Europe, and instead of having materials shipped to China for processing, we make the materials there and process them in our own facilities in North America and Croatia.”

The new resources will continue to make Cortec what it’s been since the beginning: fast on its feet and ready for anything.

“We supply a lot of ‘just in time’ products,” says Miksic. “So we like the idea of having a plant that’s closer to our clients.”