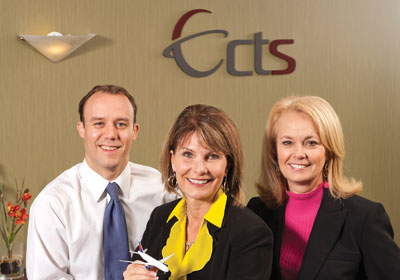 Minutes after the epic tsunami hit Japan in March 2011, Lisa Buckner’s phone started to ring. As president and COO of CTS (Corporate Travel Solutions), Buckner had several clients with employees on the ground in Japan. She immediately fired up the Sabre Travel Network’s security function, focused in on the map of Japan, and received detailed itineraries of the employees. She then began living up to the “solutions” part of her company’s moniker
.
“When the riots were occurring in Greece, we had a company that was having a meeting over there, and we had to move people to different hotels,” Buckner recalls.

With three decades of travel industry experience, Buckner knows what kind of risks to take. Hired by Minnetonka-based CTS in 2009—just when companies were slashing their corporate travel budgets—Buckner did the opposite of what many travel agency CEOs were doing. Instead of cutting staff, she increased her head count by 10 percent. Her growth strategy also included rebranding the company, which included changing its name from Capital Travel, and moving from St. Paul to Minnetonka, where she purchased a building to serve as an upmarket headquarters.

“It was a down economy. Travel agencies were laying people off, downsizing; companies had sliced their travel budgets,” says Buckner. “We had cash in the bank and money to work with, and we knew if we didn’t position the company for an industry turnaround, then we would have to play catch up. We also knew it was a good time to hire; we would be able to hire the best people. Thinking about it now, it was pretty risky. We didn’t know whether we would get the return on investment.” At the same time, she streamlined internal costs and instituted some salary cuts.

The company’s aggressive growth plan paid off. Head count has increased from about 45 in 2009 to 60 today; CTS brought in key management people as well as highly experienced travel agents. The firm’s ticket sales have jumped 30 percent since 2009, giving CTS a 15 percent average annual increase. By comparison, ticket sales industrywide increased only 7.3 percent in 2010, according to Virginia-based Airline Reporting Corporation (ARC).

“The travel management services business is an extremely tough business,” says Mike Premo, president and CEO of ARC. In 1995, 46,000 travel agencies operated nationwide. By the end of 2009, the number had dropped to 16,000, and today there are 14,000, says Premo. The sales trend has been on a downward trajectory, about 1 percent per year. “For a company like CTS to be growing and be successful, running against the grain of what is occurring in the overall industry, speaks very highly of Lisa and the team at CTS.”

CTS also offers customized meetings, events, and trade show planning and operation as well as vacation travel booking, but 95 percent of its travel business comes from the corporate sector.

The Sabre platform’s “optimizer” feature allows Buckner and her clients to optimize contracts with various hotels and airlines. Companies receive discounts based on their volume of bookings with preferred suppliers, making up-to-date data imperative.

“We are paid based on how we perform against our contract with various suppliers,” says Buckner. “Now I can see in real-time how I am performing on my contract.” That gives CTS time to make changes to keep in-house costs down while offering its customers better rates.

But the main reason for the company’s success, according to Buckner, remains the expertise of a travel agent that has your back. “If you book on the Internet,” Buckner says, “you aren’t going to get assistance if there is a natural disaster.”