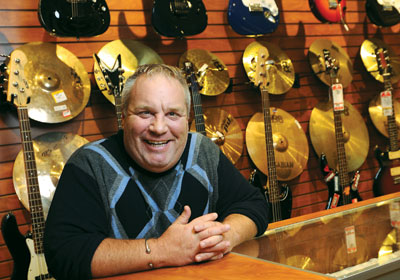 One of the few reliable truisms about business is that a recession is a pawn shop’s boom time. Ask any pawnbroker, right?

Well, wrong, says Brad Rixmann, CEO of Burnsville-based Pawn America Minnesota. “People seem to think that poor economic times makes the best times for pawnbrokers, and that’s not the case,” Rixmann says. “It’s Economics 101. If there’s more supply, the value of merchandise goes down, and we have to wait for demand to pick up.”

It took Pawn America a while to get that balance right during the economy’s most recent trough. Beginning in 2008, the company saw larger numbers of people pawning or selling their stuff.

“For the most part, we don’t say no to customers,” Rixmann says. “We buy merchandise even if we end up throwing it away.” Some items—leather jackets that didn’t sell, for instance—went into the garbage bin when demand, in the form of more sales, didn’t immediately keep pace with supply.

It took about a year, but Rixmann says that demand has picked up, roughly balancing increased supply at Pawn America. Even so, the firm has felt the downturn. In 2007, Rixmann says, the average purchase at a Pawn America branch was more than $100. In 2011, by contrast, the average sale is about $85. Pawn America has seen its profit margins thin as a result.

The key to raising those margins lies in making Pawn America an attractive place for newly value-oriented customers to shop, Rixmann believes.

Rixmann got interested in the pawn business in 1989, on a shopping trip with his father. “I was 24, but at this store I could afford things!” Rixmann recalls.

Rixmann has overtly avoided the shady image and practices of the pawn trade. “We have all the policies and procedures that a Fortune 100 company would have,” he says. Pawn America has one-, two-, and five-year business plans and a marketing strategy designed to help reach those goals.

Just the existence of a marketing plan makes Pawn America stand out from many of its peers. Traditionally, Rixmann says, pawnbrokers haven’t advertised. “The industry is archaic, often handed down from generation to generation,” he says. Rixmann’s Pawn America, however, isn’t a mom-and-pop operation, and he isn’t running it according to personal whims.

Pawn America operates 25 stores in North Dakota, South Dakota, Minnesota, and Wisconsin. The most recent branch opened October 13 in Eau Claire. Once customers arrive, Rixmann is determined that they have a pleasant experience. “We need our customers to know what they can expect when they come through the door, whether they’re in Fargo or in Madison,” Rixmann says.

Since 2007, Pawn America has increased per store staffing by about 25 percent. (Ninety percent of its workers are full time.) The reason? “People don’t like to wait in line,” Rixmann says. Employees follow a dress code and can’t have visible tattoos. “We can’t afford to have somebody make a negative judgment about our business based on an employee’s personal taste,” he adds.

Rixmann focuses on presenting stores that are clean, brightly lit, and comfortable, with strong curb appeal. Pawn America’s marketing stresses warmth and friendliness, values Rixmann tries to make visible in his operations. “Our stores are developed to be family friendly,” he says. “We don’t sell adult-oriented material or firearms. We sell things that you’d find in a Best Buy or a Target, plus maybe a jewelry store.”

Rixmann’s modern approach has caused his peers to take notice. “Brad is in a unique industry, and I think his growth and success has come because he takes good care of his employees and his customer base,” says Wayne Johansen, a co-owner of Coon Rapids–based HOM Furniture, who participated in a small-business support group with Rixmann.

Pawn America is looking to expand, and is scouting new cities and locations.