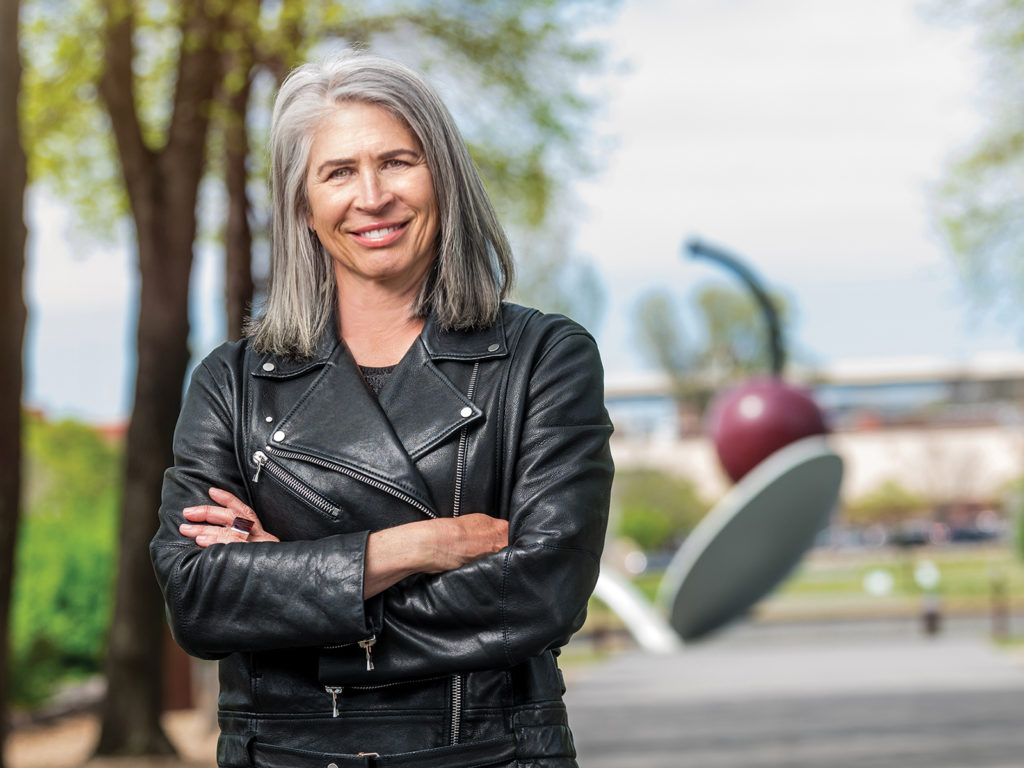 Recognizing a marketplace gap, she developed upscale cleaning products that ultimately were sold in 15,000 stores.

Long before Monica Nassif became the doyenne of upscale cleaning products, she got the equivalent of an MBA education in the 1980s by working closely with Boake Sells, Dayton Hudson’s president.

Nassif and Sells both grew up in Iowa, and Sells taught his young speechwriter what he knew about business. “I learned a ton from this guy,” Nassif recalls, especially when she would do store walk-throughs with him.

“Through his eyes, I learned to view the shopping experience for consumers,” she says. Sells pressed her to identify product trends, critique merchandise displays, and describe flaws she saw in the stores.

She was a quick study. “I got really excited about being in the retail industry,” Nassif says, which she fell into after a brief career as a nurse.

Think big, play small: Position your brand like a major player, but operate like a small, scrappy startup.

Love it or leave it: You will be working night and day. If you don’t love it, don’t do it.

Walk quickly through hell: Move past hurdles and mistakes as fast as possible to reach your end consumer.

A self-described teenage “wild child” who was frequently grounded, Nassif, 64, grew up in tiny Granger, Iowa, just north of Des Moines. Her father was a mechanical engineer at the John Deere agricultural equipment company, and her mother worked as a homemaker and nurse. Nassif was the oldest girl in a huge family.

“As a child, my mother always said I was the second-in-command,” Nassif says with a laugh. “My mother had nine children in 10 years. She started with twin boys.” Then Monica arrived, followed by three girls and then three boys.

“I could pull off a dinner,” Nassif says. “My mom would leave me notes if she was running errands, and I could figure out how to make dinner for everyone.” Thelma Meyer was Monica’s role model for the value of hard work. She was parenting a big family, making meals from scratch, growing a huge garden, and keeping her house clean.

Her mother’s homemaking skills left an indelible imprint. Decades after Monica and her husband, David Nassif, left Iowa for Minneapolis, Monica created a plant- and oil-based line of cleaning products. When she was brainstorming names to fit her brand values, she landed on Mrs. Meyer’s Clean Day.

Nassif’s path to launching two cleaning product lines—Caldrea in 2000 and Mrs. Meyer’s Clean Day in 2002—was not a linear one. She became a home goods entrepreneur after working in health care and for a department store company, as well as after running her own marketing design and communications agencies.

Her capacity for hard work had surfaced when she was 13 and weeding soybean fields. She then moved on to waitressing at a truck stop and cleaning a hair salon. While she was still a student at Dowling Catholic High School in Des Moines, she got a job as an admitting clerk at Mercy Hospital.

After graduating from high school, she went to the University of Iowa to study journalism. But her parents worried she couldn’t earn a living as a writer, so they persuaded her to major in nursing.

Nassif graduated with a nursing degree in 1979, married her college sweetheart, David, in 1980, and the couple moved to Minneapolis in 1981. She quickly got a nursing job, working a 3-to-11 p.m. shift at the University of Minnesota hospital’s surgical intensive care unit. That job allowed her to earn an English degree at the U of M during the day.

Ann Barkelew, who was Dayton Hudson’s vice president of corporate public relations, hired Nassif for a full-time job. “[Monica] views an obstacle as a challenge and an opportunity,” Barkelew says. “She was never one who would say, ‘We can’t do that.’ ’’

Nassif gave birth to her first child, Aundrea, in 1987. “When she went on maternity leave,” Barkelew says, “I was driving stuff out to her house, because she wanted to keep involved.” Not long after a second daughter, Calla, was born in 1989, Nassif founded a marketing design firm.

The Kilter agency grew to a staff of 27 people. David Nassif handled Kilter’s finances, managing cash flow and ensuring the agency got paid in a timely manner. “We had our own separate areas of expertise,” Monica Nassif says. “Had we both been in the same sandbox, someone would have died,” she jokingly adds. The couple will celebrate their 40th wedding anniversary in September.

Nassif says she grew frustrated when she gave some Kilter clients good ideas but they failed to turn them into business success.

In 1999, she had a eureka moment while on a business trip to Atlanta. She surveyed a store’s pallet of cleaning products and was disgusted. “Man, that is a category ripe for reinvention,” she remembers thinking. “I’m just going to take a page right out of Aveda. What if you could make [cleaning supplies] like beauty products for your home? Have the fragrances—from dish soap to window spray, from hand soap to laundry detergent—all be one fragrance.”

“She takes her creativity to discover what is missing in a market. She had to work really hard to break into a business of giants.”
—Mike Fiterman, chairman, Liberty Diversified International

She started drafting her business plan on the airplane, and relatively quickly she linked up with chemist Pam Helms. Over coffee in south Minneapolis, Helms recalls, she listened to Nassif describe her idea of producing cleaning products that were “as wonderful as a personal care product.” She thought the idea was brilliant, soon signed on as a consultant, and started experimenting with plants, natural extracts, and essential oils.

While Helms focused on the science of creating the products, Nassif worked on product concepts and raising money. “People will pick up a cleaning product that smells good and looks good once,” Helms says. “If it doesn’t deliver [as a cleaner], then they won’t come back.”

Helms joined Nassif in a full-time role in 2001, and they worked together to develop a line of Caldrea cleaning products, named after Nassif’s daughters, which were sold at high-end retailers. They followed up with Mrs. Meyer’s Clean Day, sold at lower price points in grocery and hardware stores. The products featured appealing scents, including lemon verbena and lavender.

Nassif’s two brand lines ultimately were sold in about 15,000 stores, and her mother, Thelma Meyer, now 87, traveled to stores to serve as a brand ambassador.

“Execution is a big part of being successful,” says Nassif, who regularly worked 14 hours a day.

Mike Fiterman, chairman of Liberty Diversified International, could have been an early Nassif investor. The late Ralph Strangis, a consummate connector of smart businesspeople, was an attorney for Fiterman and Nassif. He encouraged Fiterman to listen to Nassif’s pitch for seed money.

“I was very impressed with her,” Fiterman says, but he was skeptical about the idea. “I said, ‘You are telling me that people are going to spend extra money for designer soaps to clean their bathrooms and kitchens?’ ” Nassif plowed ahead, raising $1.4 million from angel investors.

In 2008, Nassif sold her two cleaning products businesses to SC Johnson, where the brands live on and Helms serves as executive director of research and development.

“I was so stupid I didn’t invest,” Fiterman says. “I was so wrong, and she was so right.” But Fiterman did wise up and asked Nassif to serve on his board of directors.

1956
Born Monica Meyer, she was raised in small-town Granger, Iowa.

1979
Graduates from the University of Iowa with a bachelor’s degree in nursing.

1983
Graduates from the University of Minnesota with a bachelor’s degree in English.

2011
Launches Sophia Graydon, a luxury sleepwear line, which has since gone out of business.

2016
Becomes president of the Walker Art Center board.