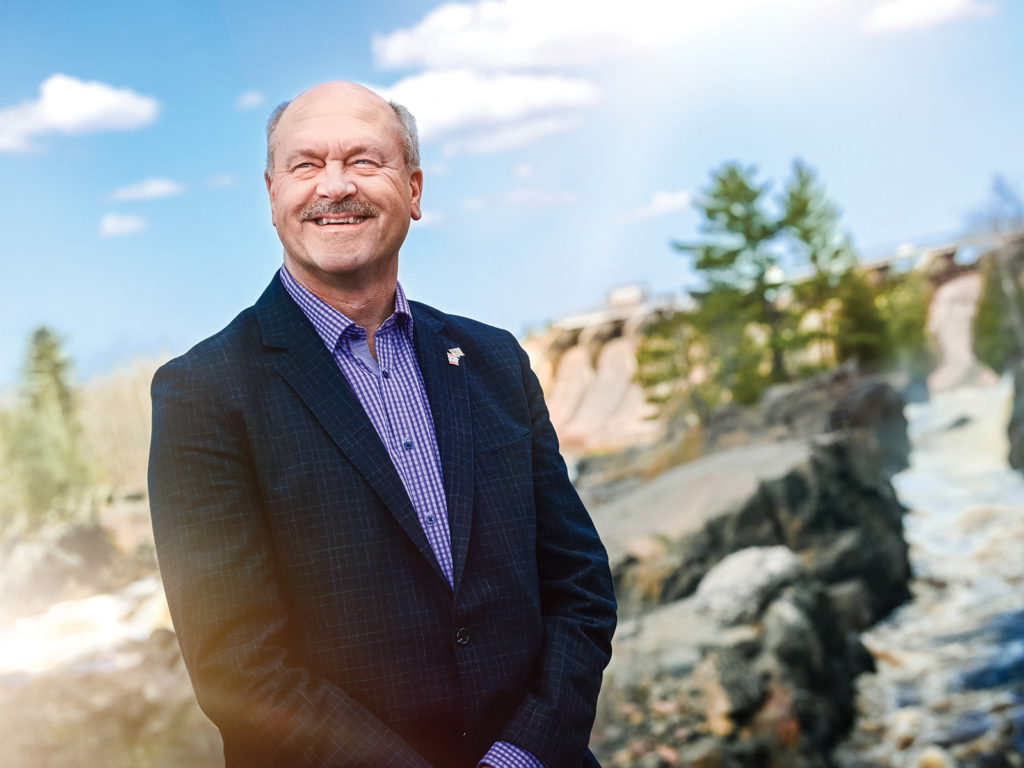 He re-energized a traditional electric utility by branching out into renewables.

It’s too easy to say that Al Hodnik has a lot of energy. But it’s true nonetheless.

In the 11 years he served as president (10 as CEO, nine as chairman) of Duluth-based energy company ALLETE, he got a lot done. ALLETE’s largest subsidiary, Duluth-based utility Minnesota Power, has reduced its carbon footprint by more than 30 percent, and its renewables growth has been “faster and farther than any other utility in Minnesota,” Hodnik says. In 2005, Minnesota Power generated 95 percent of its electricity from coal. In 2021, 51 percent of that power will come from renewables. Hodnik also launched a subsidiary, ALLETE Clean Energy, which owns, operates, and is constructing approximately 1,340 megawatts of wind energy generation across seven states. When he became president, ALLETE’s market cap was about $750 million. In February, it was $4 billion.

“Al is a visionary,” says George Goldfarb, president and CEO of Duluth-based clothing retailer Maurices and an ALLETE board member since 2012. “He’s very strategic—he really knows where he wants to go.” Goldfarb notes that “Al has consistently delivered on ALLETE’s growth objectives. He knows the company and he knows the region so well.” As challenges arose, “Al has always been able to leverage his resources and his experience.” Goldfarb also touts Hodnik’s approach to leadership: “He’s always had this humbleness to him. It’s all about the team—it’s not all about him.”

That down-to-earth leadership style comes naturally to him. The Iron Range native has worked in both labor and management. He’s been laid off and had to conduct layoffs himself. And he has experienced the busts and booms of the northern Minnesota economy along with the people he leads.

Indeed, Hodnik grew up with Minnesota Power—his father worked for its Laskin electric generation plant in Hoyt Lakes for 30 years. Hodnik himself worked there during the summers while attending the University of Minnesota. After graduation, he took a full-time job there, with plans to go to law school after about a year. Six months after he started, the steel industry fell into a deep recession, and the mining industry collapsed. Laid off, Hodnik was offered an operations position at Minnesota Power’s Boswell electricity plant in Cohasset. While there, he met his future wife, Erika, which led him to stay on the Range and at Minnesota Power.

He’s always had this humbleness to him. It’s all about the team—it’s not all about him.
—George Goldfarb, president and CEO, Maurices

“There was no clear pathway to the C-suite—certainly no clear pathway to the CEO office,” Hodnik says. At Boswell, he was a union operations man. Then, in 1987, Hodnik was asked to join an organizational development team that included people from various Minnesota Power departments. “The mission was to prepare the company for change,” he says. “I’d been through a lot of change in my life and could relate to people at all levels, by virtue of my background.” The team’s goal was to develop a more adaptable culture, including an open structure between labor and management that would spawn innovation.

Hodnik continued in this role for the next several years. He also served as mayor of his hometown of Aurora “while driving around the system and working in the plants.” What Hodnik calls “this interesting amalgam” of experiences would serve him well when he “flipped over to the management side.”

In 1995, Minnesota Power asked him to take charge of the Laskin plant. Facing potential closure, Laskin “was older, and it didn’t have a purpose,” he says. Hodnik was asked to “take all of the organizational development concepts I’d learned and see what the team can do.” Working with the employees, “we decided that the role of that facility should be peaking—flexible fuel, flexible people, flexible equipment.” So the plant would be poised to answer the call whenever additional electricity was needed.

In 1996, Hodnik was asked to improve the operations of Minnesota Power’s Boswell plant in Cohasset; he later helped incorporate the former LTV Mining energy plant at Taconite Harbor north of Duluth into the Minnesota Power system. From there, his career climb went into overdrive. In 2009, he was named president; a year later, he was elected CEO.

When Hodnik became president, the Great Recession was in full swing. The taconite industry, whose energy needs have historically generated more than 50 percent of Minnesota Power’s income, had more or less shut down. The pain Hodnik experienced in laying off people he knew well drove a desire to diversify ALLETE into nonregulated businesses outside of Minnesota Power.

One opportunity he saw: a renewable-energy subsidiary, the genesis of ALLETE Clean Energy. There was internal skepticism: Could ALLETE compete with larger companies? Hodnik was determined: “We still needed utility people who know how to interact with big utilities and industrial companies that would buy renewable energy.” ALLETE also could attract and develop new talent by offering employees “public company opportunities,” along with “a small-company feel.”

Hodnik also saw an opportunity in the nexus of energy and water. In 2015, ALLETE acquired a majority share in U.S. Water Services in St. Michael, just northwest of Minneapolis, a fast-growing company providing the chemistry and the equipment for water processing and treatment. By 2019, ALLETE Clean Energy and U.S. Water Services generated nearly 40 percent of ALLETE’s earnings. This triggered concerns from investment ratings agencies, which were used to appraising ALLETE solely as a regulated utility. Last year, ALLETE sold its stake in U.S. Water Services for $270 million, roughly doubling what it paid. That money has been invested into ALLETE Clean Energy, which is developing new wind projects across the U.S.

Meanwhile, Hodnik worked to boost renewables within Minnesota Power. In 2005, the only renewable source in Minnesota Power’s portfolio was hydro—power derived primarily from a series of dams on the St. Louis River south of Duluth. Since then, Minnesota Power has increasingly tapped wind and solar sources. It also has shut down seven of its nine coal-fired plants, a move Hodnik believes made “economic sense” for the company. In 2015, Laskin was converted from coal to natural gas. Two of the four coal-based generators at Minnesota Power’s Boswell Energy Center in Cohasset were shut down, as were the three Taconite Harbor units. The remaining Boswell units—“the backbone of our system”—have been fitted with mercury scrubbers.

“ALLETE was one of the most coal-intensive companies in the industry,” notes Tom Kuhn, president and CEO of the Washington, D.C.-based Edison Electric Institute, which represents publicly traded U.S. electric companies. Crediting Hodnik’s leadership, Kuhn says that “to make such a big transition in such a short period of time is just remarkable.”

Speaking of transitions: In February, Bethany Owen, an 18-year ALLETE veteran whom Hodnik mentored, was elected CEO. Hodnik will serve as executive chairman till he retires next year. He proudly notes that half the ALLETE directors are women, as well as three of the five C-suite principals. Just as Hodnik did when he took the top job, Owen faces the challenge of managing the company through a major economic downturn.

“ALLETE has endured for 115 years through all sorts of physical and financial storms,” says Hodnik, who has ridden through several of those storms. “I have every confidence in Bethany and her team to carry on through Covid-19 and continue onward.” By regenerating ALLETE, Hodnik has given her the power to succeed.

1959
Born in Virginia, Minnesota, on the Iron Range; grew up in nearby Aurora.

1981
Graduates from the University of Minnesota with a combined political science and public administration degree; joins Minnesota Power at Hoyt Lakes facility.