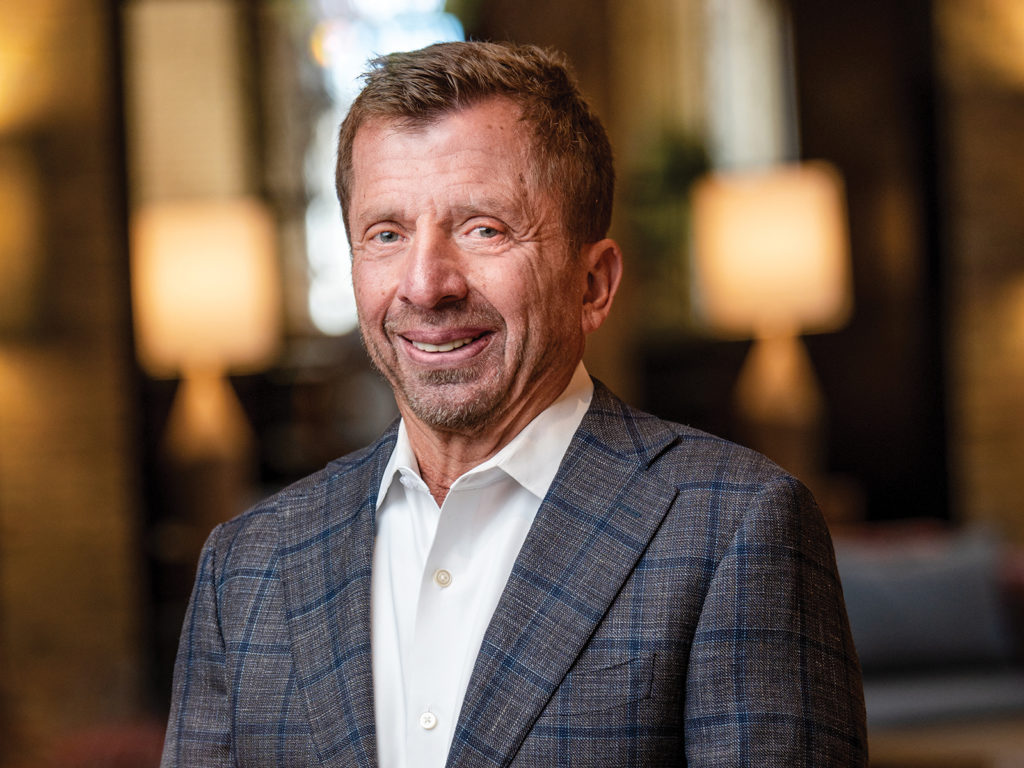 George Sherman does not come from the family of one of the Twin Cities real estate dynasties.

“I came in through the side door,” jokes Sherman, CEO and owner of Minneapolis-based Sherman Associates, long established as one of the metro’s biggest and busiest developers. Over the last four decades he has developed more than 8,500 apartments and 1,200 for-sale units; the value of his development projects tops $4 billion.

In the beginning, real estate was just going to be a side investment for Sherman, who had a biochemistry degree. In 1979 he acquired a 16-unit apartment building at 27th Street and Humboldt Avenue in south Minneapolis. His goal was simply to own an apartment building. But although he was a novice to the business, Sherman instinctively changed course when the real estate market shifted. Two years later he converted the building into condos.

“There was a mini condo boom occurring around Minneapolis in the beginning of the ’80s,” recalls Sherman. “I ran an ad in the Sunday paper, and all 16 were sold before the end of the day on Sunday.”

At that point, his days in the biochemistry business were numbered. He bought more buildings and started developing his own townhomes and apartment projects. Along the way he dabbled in mini-storage and mobile home developments. Throughout the 1980s he had a partner, Nick Boosalis. (They parted ways in 1991.) As near as he can recall, Sherman quit his “day job” in 1981.

A defining deal of Sherman’s early career was his 1988 acquisition of Cedar Square West (now Riverside Plaza), a sprawling 11-building complex with 1,303 affordable apartments in the West Bank area of Minneapolis. It was not an appealing prospect: The property had gone into foreclosure and was 50 percent empty.

What drew Sherman to the deal?

“One is the sheer complexity of it,” says Sherman. “I have always been intrigued by solving complex issues, and that one had about as many as you could throw at it. Maybe it’s my biochemistry degree. We had financing issues, we had physical plant issues, we had social issues and a complex political environment in the neighborhood.”

More than two decades later, Sherman assembled an array of public and private backers for a $132 million rehab of Riverside Plaza.

“It’s an affordable housing project that we couldn’t possibly replace,” says Mike Christenson, who led the city of Minneapolis’s Community Planning and Economic Development department from 2006 to 2011. He’s now the director of the Urban Investors program at Augsburg University. “He understands the most challenging neighborhoods in the city.”

Affordable housing remains a big part of the firm’s business. Sherman estimates that more than 50 percent of the development work in his career has been in affordable housing.

“We continue to produce 600 to 800 units of affordable housing a year,” says Sherman. “It continues to be a major focus of ours.”

Sherman adds that he has also developed job resource centers, women’s shelters, and alcohol-treatment drop-in centers. “We have an objective every year to do a community impact project,” says Sherman.

Christenson points to the Midtown Exchange project in south Minneapolis as another example of that philosophy. Minneapolis-based Ryan Cos. was the master developer of the overhaul of a former Sears store; Sherman Associates converted spaces into condos and apartments.

“He has real public spirit,” says Christenson. “He knows how to develop a site in the public interest. I saw him do that at Midtown Exchange; I saw him do it at Cedar-Riverside.”

“He has real public spirit. He knows how to develop a site in the public interest.”
—Mike Christenson, program director, Urban Investors at Augsburg University

During the condo boom of the early 2000s, Sherman followed the gold rush, building his share of condos. In recent years, he’s followed the market trend to market-rate apartments. Recent buildings include the 180-unit East End, which includes a Trader Joe’s grocery store, and Encore, a 123-unit project completed in 2016 in downtown Minneapolis.

He’s selectively tackled hotel projects including Aloft Minneapolis, which opened in 2008, and the Canopy by Hilton Minneapolis Mill District, a renovation of the vintage Thresher Square building, which opened last year.

He also has a portfolio of work outside the Twin Cities, primarily in Iowa and Wisconsin but also Denver. In
Des Moines, Iowa, Sherman Associates has 11 projects completed or underway.

The firm’s direction is largely driven by Sherman’s own gut instinct and experience.

“I don’t have partners,” Sherman says. “When things go well, partnerships are always great, but as recessions hit they become difficult. Life is too short to be that complicated. I also like to do things that not everybody would want to do. I spent four years redeveloping the NorShor Theater in Duluth. Most partners would have told me to get out of it.”

“Understanding the economics of a transaction is clearly one of George’s strengths,” says Jim Weichert, who has done tax and advisory work for Sherman for four decades. “George is just tenacious about getting that figured out.”

Sherman also has a reputation for being fiercely loyal to business partners.

“U.S. Bank and I go back to 1979. I borrowed, I think, $20,000 to buy that first apartment building,” says Sherman. “Two years ago I had lunch with [former U.S. Bank CEO] Richard Davis, and he said, ‘You’re one of the longest-standing real estate developers this bank has worked with.’ ”

Sherman has been through his share of market downturns, but the economic fallout from the Covid-19 pandemic has no precedent. He says that his staffers are talking to residential and commercial tenants, arranging assistance such as discounts and payment plans. He has delayed hotel projects but is pressing ahead with multifamily developments.

“We are moving ahead with almost all of our housing projects,” Sherman says. “I don’t think we know all the different paths that it will take in the next two years as we work through this.”

Sherman turns 67 this summer. His son, Chris, 34, is set to become president of the firm this summer. But the elder Sherman isn’t retiring. “I’m going to stay very involved in development. … I’m still at my desk today,” he says. “Not on the beach.”

2000
Enters Duluth market, where the company has now done many projects.