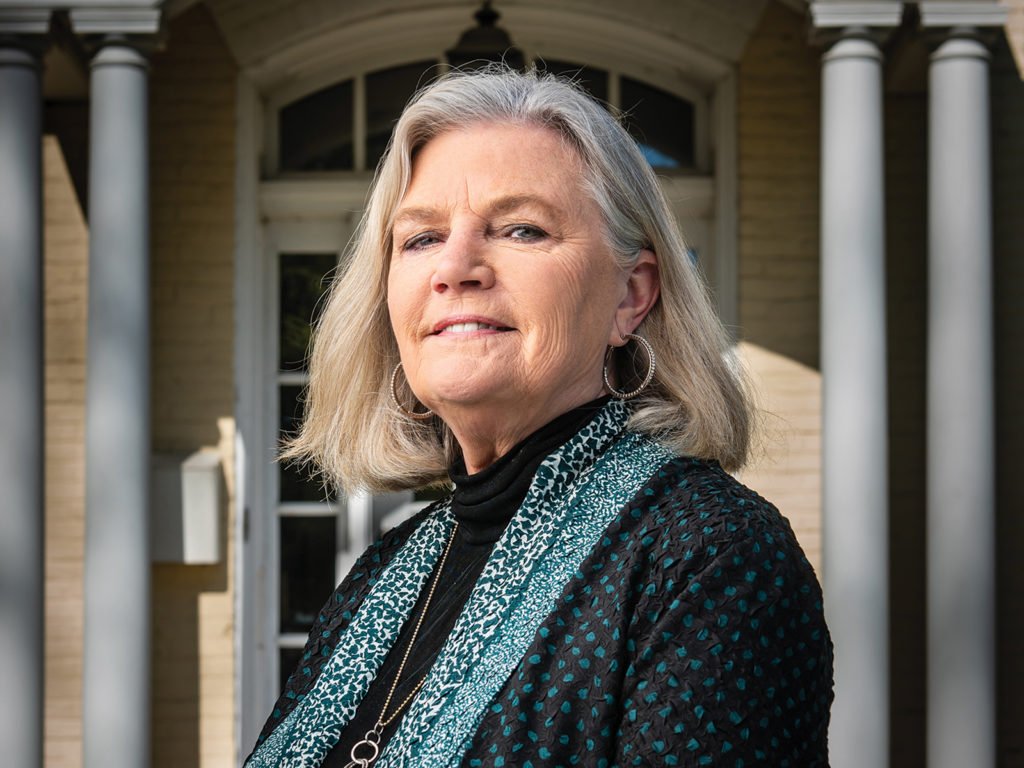 The principal and CEO of Tunheim communications agency thinks big about the betterment of business in Minnesota.

When Kathryn Tunheim interviewed at Honeywell’s communications department for the role that would come to define her early career, she told her future boss she already knew her way around the building. She’d interned there as an engineering student, and the experience crystallized one thing for her: She didn’t want to be an engineer.

But her aptitude for math and science, combined with communications skills and a proclivity for public policy, became her formula for success. This year marks the 30th anniversary of her eponymous Bloomington-based professional services agency, which, over the years, has worked with a wide range of clients including Target, UnitedHealth Group, Cargill, and United Way.

However, anyone who has collaborated with Tunheim will tell you her impact on Minnesota’s business community goes well beyond the work of her firm. From board service to civic leadership, she’s played a key role in putting Minnesota on the map as a destination for business, innovation, and tourism. Tunheim participated in the formation of the Greater MSP economic development partnership. She’s served on bid and host committees for just about every major event to come to town in recent years, including the Republican National Convention, Super Bowl, and Ryder Cup. She’s a founding partner in Manova, the global health summit that made its Minneapolis debut two years ago.

“She is unabashedly invested in making sure that our region and our business community thrive together,” says Pamela Wheelock, interim president of the McKnight Foundation, where Tunheim serves on the board of directors. “She challenges everyone around her to continually look at walls we can break down to find new progress. Kathy believes to her core that Minnesota is the very best place on Earth to live a life and do business, and you feel that enthusiasm when you work with her.”

“Kathy believes to her core that Minnesota is the very best place on Earth to live a life and do business, and you feel that enthusiasm when you work with her.”
—Pamela Wheelock, interim president, McKnight Foundation

Minnesota Twins president and CEO Dave St. Peter worked with Tunheim on ballpark legislation and the 2014 MLB All-Star Game and is also a fan. “I’ve found Kathy’s career journey to be filled with humility, character, and curiosity. Her empathetic leadership has led to sustainable, winning strategies for her clients—including the Minnesota Twins.”

Tunheim grew up in Northfield, the second oldest of five siblings born to educators: Dad was the high school football head coach; Mom led placement services at Carleton College. Her mom steered her toward engineering, which was uncommon in the 1970s. “There weren’t a lot of women wandering the halls of IT,” Tunheim recalls of the University of Minnesota’s Institute of Technology. But that’s not why she switched to political science. For that, she credits an internship in the office of Gov. Wendell Anderson. She started right around the time Anderson made the cover of Time magazine—pictured on a lake, holding a fish, with the headline “The Good Life in Minnesota.”

“It was a time when you saw the power of people with vision and ambition for the state and also the need to work across the aisle,” says Tunheim, who worked on the governor’s speech-writing team throughout college. “I came to understand the power of research, of thinking about what needs to get messaged and how to do it effectively and in a way that’s authentic.”

Politics also led Tunheim to her husband, Chief U.S. District Judge John R. Tunheim. When they met while she was working for Anderson, he was on staff for U.S. Sen. Hubert H. Humphrey. She married during her senior year of college. Her husband was in law school, and after she graduated, Tunheim says, “I needed a job—we were dirt-poor.” She landed at St. Paul computer company Comten, which served AT&T and called on her to define the consequences of a U.S. Telecommunications Act rewrite. “It was a fascinating time to work at the intersection of business and public policy—a place to which I have returned many times in my career.”

Shortly after she was hired, Comten was acquired by NCR. Tunheim helped with the integration, but she was soon recruited by Honeywell, then Minnesota’s largest private employer. The job was public relations manager. “I remember saying: ‘What is that?’ It really wasn’t in my frame of reference as a career path.”

But she quickly came to realize communications was about much more than talking; in fact, “it’s mostly about listening.” She was charged with leading communications planning for the sale of Honeywell’s largest unit, its Boston-based computer business, to a partnership of two companies, one in France and one in Japan. “It was a complex global transaction,” Tunheim recalls. “I worked closely with the legal teams and the finance teams of these international companies, learning along the way how important effective communications were to the successful execution of business strategy.”

Tunheim rose through Honeywell’s ranks to vice president of corporate public relations and internal communications. The company didn’t want to lose her when she had her first child, Liz, followed by son Samuel three years later. It was 1983—before laptops and WiFi. Honeywell hardwired Tunheim’s home so she could work during a five-month leave. When she returned to the office, she brought her baby in a bassinet.

“I was sort of a trailblazer, and I didn’t think about it at the time. It was the only way I knew how to put it together. Working in a place that was appreciative of my talent and understanding of the need to create some opportunity for flexibility has shaped the way I’ve thought about balance” at her own firm, she says.

By 1990, Honeywell had consolidated from 27 distinct businesses to three. The job started to get a little bit boring, she says, so she and four Honeywell colleagues hatched a plan to set up their own agency. Honeywell signed on as the first client of what was originally called Tunheim Santrizos. Tunheim expected to stay only a couple of years before returning to big business. But less than two years in, her partner Mario Santrizos was diagnosed with brain cancer. They talked every day during his 18-month battle, and he persuaded Tunheim to keep the agency going. She tears up thinking about it all these years later.

Tunheim continued to diversify the agency while expanding her personal involvement in civic efforts like the Itasca Project, an alliance focused on economic prosperity in Minnesota, which gave birth to Greater MSP. She served as a special advisor to Gov. Mark Dayton in 2011-2012, with a focus on helping employers recover from the recession. “Personally, it’s the way I’ve managed the compromise I made staying in small business and having an appetite to be involved in big things.”

Retirement is unlikely anytime soon, but Tunheim, 64, is thinking about her exit strategy. Since appointing John Blackshaw president and chief operating officer in 2018, Tunheim has been gradually backing away from the day-to-day operations of the agency. Her daughter, Liz Tunheim Sheets, is now the firm’s chief marketing officer. Those appointments have given Tunheim the time and space to focus on new ventures, like making the Twin Cities the home base for Manova. During the stay-at-home order, Tunheim spent afternoons teaching her 6-year-old granddaughter about oil painting and playing guitar. Tunheim is also pondering a memoir.

“Whether or not anyone reads it, it’s good for me to write it down. When you’ve had a career of incredible opportunity and learnings from people around the world, there’s an obligation to tell those stories forward.”

1974
Tunheim lands a summer internship with Gov. Wendell Anderson right out of high school; she works on the speech-writing team.

1979
Graduates from the University of Minnesota with a degree in political science; starts a policy job at Comten, a St. Paul-based computer company.

1980
Recruited to the public relations team at Honeywell.

2003
Repurchases the firm as sole owner.

2007
Becomes partner in IPREX, one of the world’s largest networks of independently owned public relations firms, and spends seven years as part of global leadership.