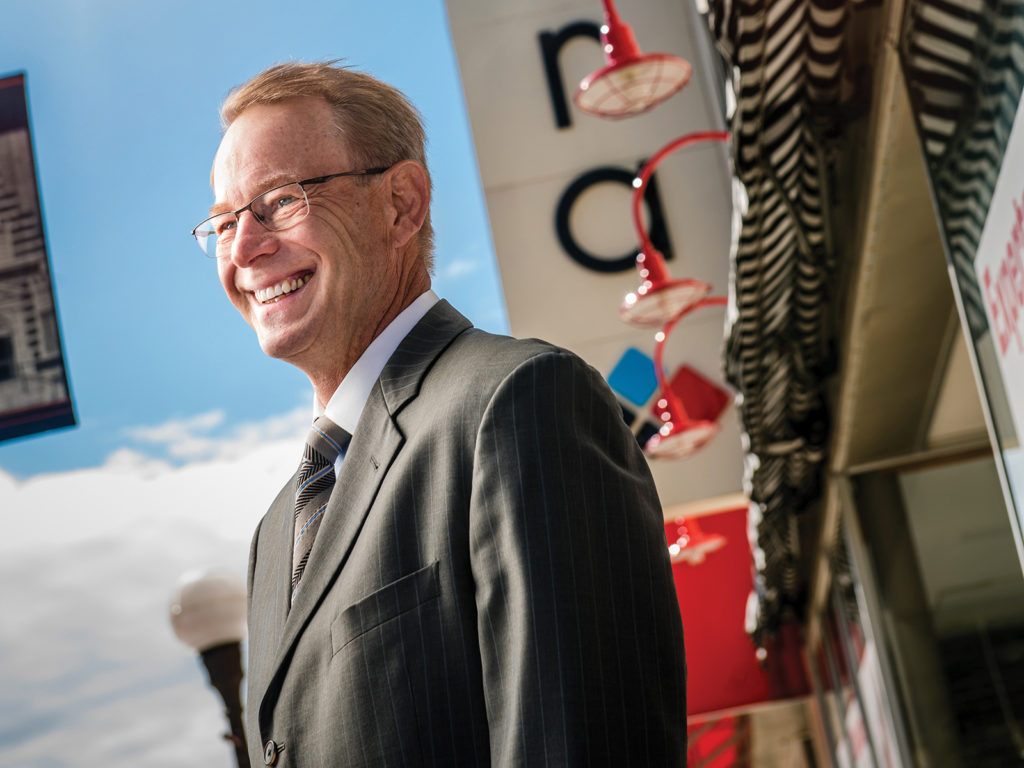 The retired CEO of Nuvera solidified the future of telecommunications in southwestern Minnesota.

Even if many folks have never heard the name, New Ulm-based Nuvera Communications Inc. ranks as one of the oldest companies in the state. Minneapolis-based Target Corp. and Maplewood-based 3M Co. both started in 1902; Nuvera was launched just three years later, as the New Ulm Rural Telephone Co. After 115 years, it remains a thriving business.

That’s largely thanks to the leadership of Bill Otis, who retired as Nuvera’s CEO in 2019 after 37 years in the post. Under Otis, the company’s revenue grew from $3.65 million in 1982 to $64.9 million in 2019. He remains connected as a member of the board of directors.

Not bad for a guy who once couldn’t have found New Ulm on a map. “I was from Houston, Minnesota, which is down by Winona,” says Otis. “I didn’t know where New Ulm was at all.” (New Ulm is roughly 100 miles southwest of downtown Minneapolis. Per the 2010 census, the city had roughly 13,500 residents.)

Perry Meyer, a fifth-generation farmer in the New Ulm area, has been on the Nuvera board since 1995 and currently serves as chair. Meyer says that his great-grandfather was a founding board member of the telephone company.

Otis has “the highest level of integrity and grew the company with strong relationships that he developed with other companies and other people that he got to know,” Meyer says. “Bill had the knack for seeing what the future held and what we should do to stay relevant.”

Otis was just out of college, working as an accountant for 3M, when he was invited to interview with what was then New Ulm Telecom in 1979. The small company needed a controller. He met with the board, which suggested that, if things went well, maybe someday he could run the place. Otis liked what he heard and took the job.

“I was really impressed with the board,” recalls Otis. The company at the time was very old-school. “It was what we referred to as ‘POTS’: plain old telephone service.”

“Bill had the knack for seeing what the future held and what we should do to stay relevant.”
—Perry Meyer, board member, Nuvera

Under Otis, the company grew through a series of acquisitions of other small rural telephone companies, some tactical investments, and keeping up with the latest technology. Today it offers everything you’d expect from a big-city company: high-speed internet, wireless service, and digital TV.

“In the rural areas that we serve, there wasn’t a lot of growth,” says Otis. “Somewhere along the line it became pretty plain that if you’re really, really small, it’s going to be really, really tough to survive.”

Otis, 62, says the company didn’t start to grow notably until its 1986 deal to buy Western Telephone Co., which served the southwestern Minnesota towns of Springfield and Sanborn. He recalls company leaders approaching the deal with some trepidation. Even though the price was just $1.8 million, it was the first acquisition in the company’s history.

“That was a big acquisition at the time,” remembers Otis. “We thought, ‘What are we going to do if it doesn’t work out?’ ”

It was the first of several acquisitions under Otis. In 1993, the company acquired Peoples Telephone Co. of Aurelia, Iowa. Otis remembers some raised eyebrows at the time. “People would say, ‘It’s like four hours away. Why did you do that?’ ” he says with a chuckle.

“That gave us an awful lot of cash to go forward,” says Otis. “It was 50-some million dollars … net from tax.”

In 2008, Nuvera made its biggest acquisition ever, paying $78 million for the Hutchinson Telephone Co. Over Otis’ last decade with the company, there were several other deals, capped by the $42 million acquisition of Scott-Rice Telephone Co. in 2018. That same year the company changed its name from NU-Telecom to Nuvera.

Otis says that Nuvera has never had to worry much about telecom giants like CenturyLink, which for the most part aren’t interested in rural business.

“We’re pretty small in the grand scheme of things. … The large companies, they have rural areas, but they have not invested in rural areas,” says Otis. “We think New Ulm is big.”

Otis says that, according to company lore, when Nuvera was established in 1905 it was organized like a co-op and the founders issued stock. “Nobody’s supposed to own more than 7 percent of the company,” says Otis. “It was to stop people from getting control.” (Sorry, hedge funds.) That policy is still on the books. Otis says as stock was handed down from generation to generation and divvied up among more people, Nuvera backed its way into becoming a public company by hitting the threshold of 500 shareholders.

Barb Bornhoft joined the company in 1990 and has been its chief operating officer since 1999.

Otis “was always interested in the success of others,” says Bornhoft. “[He] encouraged and provided opportunity and an environment of opportunity that promoted growth. That was really important to him always.”

In making decisions about next steps for the company, Bornhoft says, “he would think about all of our stakeholders: our shareholders, our customers, our communities, and our employees.”

Otis has been on the board of directors of Alliance Bank for 32 years and is the current chair.

“He’s been a great mentor for me,” says V. Philip Reim, CEO of Alliance Bank. “He’s really been a guiding force. … He’s more about the process. [He asks] ‘What are you thinking about?’ rather than telling you what to do.”

Otis learned many of his core life and business values from his father, who had an eighth-grade education. His father stressed the importance of honesty, sincerity, openness, and hard work. “He always said that ‘Great things come from a lot of hard work,’ ” Otis recalls.

Many of the world’s high-flying CEOs pay consultants large sums to discover those same fundamentals.