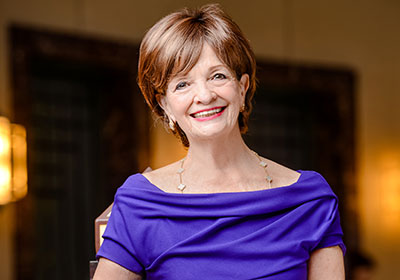 Marilyn Carlson Nelson has long been one of Minnesota’s most influential and powerful businesspeople, female or male. So it’s worth noting that wasn’t always the case. After graduating from Smith College and studying in Paris and Geneva, Nelson came back home to Minneapolis and found just about every door closed to her. She finally was hired at a securities firm as a securities analyst, a job she had to fight to keep.

In 1998, when she took over the travel and hospitality company her father, Curt Carlson, had founded, she resolved to make it an inclusive organization. “I would make certain that it would be a meritocracy,” Nelson says.

Nelson has made a career of overcoming naysayers. She led successful efforts to bring the Super Bowl to Minnesota in 1992, despite arguments that her home state was too cold to host it. She overcame doubters in the 1990s that her family business could successfully unite with a European travel firm. More recently, she helped lead the battle against the anti-gay marriage amendment to the Minnesota Constitution in 2010.

And Nelson has made Carlson into a company where both men and women can thrive. One of the women leaders to whom she has provided help and support is Trudy Rautio, who became Carlson’s CEO and president in 2012 after serving as the company’s CFO and in other senior executive roles since 1997.

Though Nelson stepped down as CEO from Carlson in 2008, she remains one of its directors while serving on numerous nonprofit boards–. And she continues to inspire future business leaders. For the past five years, Nelson has co-taught a course at the University of Minnesota’s Carlson School of Management on corporate responsibility with Myles Spicer, professor of strategic management and entrepreneurship.

“She has very much encouraged students to think about leading and taking command on tough issues,” Spicer says. Students were impressed with how accessible Nelson was, he adds, noting that she “instilled in them the importance of being analytic and thoughtful in these issues.”

Nelson calls her teaching “one of the most rewarding things I’ve done,” adding that “it’s renewed my hope in the future to see how much these young people believe that business can be a power for good.” She speaks from experience.

First experience as a leader: “I was asked as a junior in high school to edit the school paper . . . . I learned that leadership is about communication, it’s about a vision, and that you can’t do it alone. ”

Hardest lesson: Finding a good job after college, and resistance from male colleagues. “I was so convinced that this was wrong—that my human right to work, to use my mind and my talent and my education were going to be limited only by my gender.”

Greatest current challenge: “Our companies have become so large and global. The competition has become so keen. [And we’re] more vulnerable to geopolitical disruption.”

Best habit: “I tend to be very present. I’m pretty much in the moment. ”

Worst habit: (Related to her best habit:) “I’m often late for the next appointment.”