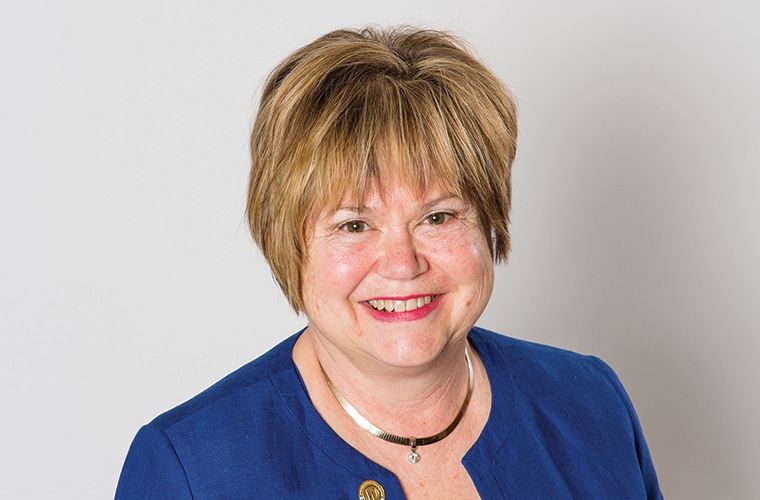 John and Kari Rihm had it all planned. One day, he would sell his truck sales franchise and they would retire.

The Rihm family had sold trucks since 1932, owning a Kenworth franchise since 1949. John Rihm expanded the dealership to Duluth-Superior in 1997 and to southern Minnesota in 2008.

In 2010, at 61, John died of brain cancer four months after he was diagnosed. Kari Rihm, who had an M.A. and had worked in marketing communications, had been a stay-at-home mom for 17 years. She had to decide whether to keep or sell the business, which was recovering from the recession.

Kari decided to give it a go. To persuade Kenworth management to grant her the franchise, she gave out treat bags filled with chocolate hearts to show that she loved the business, lip balm to indicate she could do a lot of talking, and nail brushes to prove that she would work hard.

She landed a three-year contract, hiring John’s son, J.B. Rihm, in 2011 . He is now vice president of Rihm Family Cos., president of RMC Truck Parts and secretary of Rihm Motor Co. He oversees operations, the truck and global parts team, marketing and branding and assists the company’s building projects.

In 2016, the company formed RMC Truck Parts. This January it acquired Red Wing truck leasing company LTX Inc., which has 15 locations in Minnesota, Wisconsin and South Dakota. In May, Rihm broke ground on a sales and service facility in Coon Rapids and a new headquarters in South St. Paul. It also plans to become a PacLease franchise in 2018.

Kari Rihm enjoys meeting customers, especially truck and fleet buyers. “We have gained business because I’ve made a phone call or I’ve said, ‘I want to come and see you,’ ” she says. “People want to know who they’re spending millions of dollars with.”

J.B. plans to take over the business when Kari retires. But she wants other families in the trucking industry to realize that even the best-laid plans—like hers and John’s—may not work out. “Our plan was a good plan, but I oftentimes tell people we should have had a Plan B.”