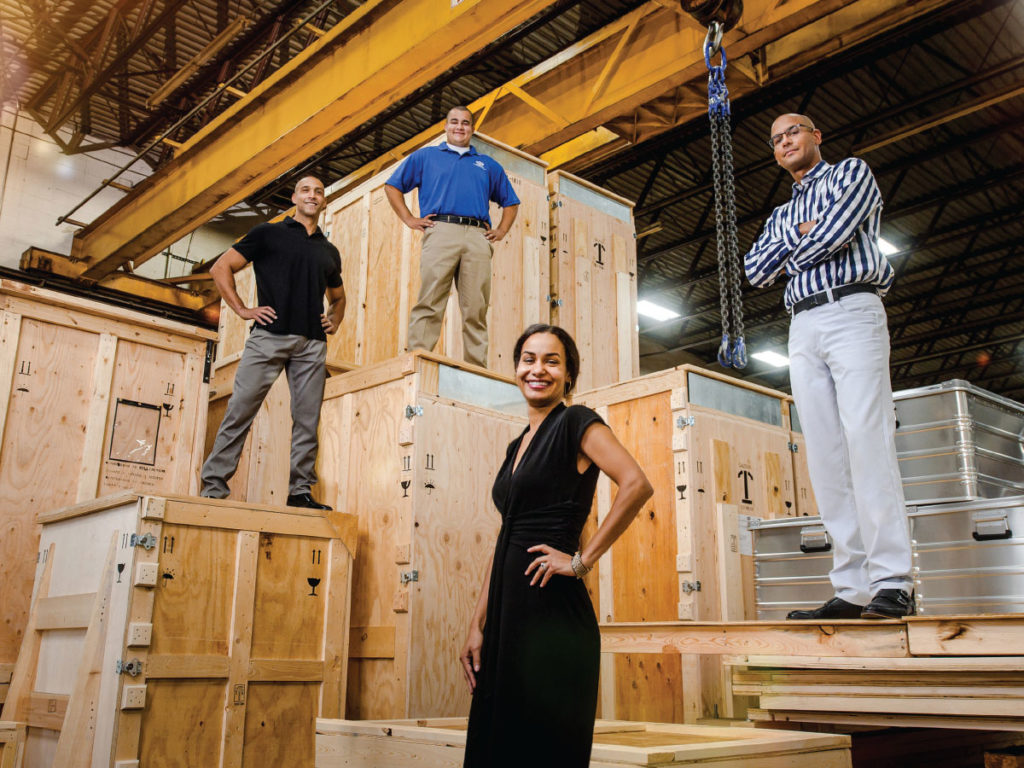 From left: Mike Burns, Nick Wallace (son of Greg Wallace and a college senior who works for the company in the summers), Andrea Burns, and Joseph Wallace family portraits by Travis Anderson

What the company does Packages and arranges shipment of heavy industrial mechanical equipment, primarily for B2B clients; also designs and manufactures crates and skids for long- and short-term storage

Family members in the business 3

The Wallace family business began with a casual conversation.
In 1986, wanting to send some furniture to his parents back home in the Bahamas, Prince Wallace contacted Independent Packing Services, located not far from his Bloomington home. While making shipping arrangements, he talked with the company’s owner and discovered that the business was for sale.
For Wallace, a CPA who came to Minnesota to attend St. John’s University in Collegeville, it was an intriguing opportunity. He wanted to run his own firm. Buying the company would also give Sandra, his Minnesota-born wife, the chance to leave nursing and learn business.
At the time that Prince and Sandra Wallace purchased the business, Independent Packing Services Inc.—IPSI for short—had just two employees besides the owner and operated out of a modest Brooklyn Park location. Today, the staff numbers 60, and IPSI, now in larger quarters in Crystal, is a $10 million company that has grown 35 percent over the last five years. IPSI specializes in shipping hard-to-package heavy industrial mechanical equipment such as supercomputers and food-processing machinery. The largest item IPSI has ever shipped: a power plant generator weighing approximately 100 tons. Most of its customers are regional, though it does business nationally and internationally.
But no matter how large IPSI grows, “we still have the same culture,” says Joseph Wallace, the Wallaces’ son and IPSI’s current owner and president. He and his sister, Andrea Burns, honor the “opportunities that have been presented to us” by discovering new ways to serve the company’s distinctive customer base.

“Everybody at Independent Packing Services has the same job. That job is delivering peace of mind.
We just perform different tasks to accomplish that.”

IPSI is the only place Joseph Wallace has ever worked. He started full time in 1994 and saw that IPSI could grow. The company also had “the kind of culture I wanted to work in”—one that stays close to customers and employees to help them flourish. He has worked in every part of the business: packaging design and production, purchasing, inventory control, accounting. “So I understand how all of the departments work and what they need from each other to be successful,” says Wallace, who became president in 2008. (His parents sold the company to him 10 years later.)
His sister joined the company in 2003, and now serves as IPSI’s general manager—“or vice president; it varies,” her brother says. “Titles aren’t a big thing at our company.” There are even times, he notes, “I’ll go on the floor and put crates together if we’re backed up.” Burns’ husband, Mike, also works for the company in onsite and field-service capacities. (A third sibling, Greg Wallace, is a wealth management advisor for Northwestern Mutual.)
IPSI has grown mostly through word of mouth, largely due to what Wallace calls “customer intimacy.” The heart of this approach: Look for and provide “the best total solution,” which, he says, might be a service or a product that they currently don’t provide a client, but discover while working with them.
Those needs often go beyond packing and shipping to include services like warehousing and inventory management. Case in point is a company IPSI has worked with closely for more than 30 years: Carl Zeiss Industrial Quality Solutions, a division of Germany-based precision-equipment manufacturer Carl Zeiss AG. The Maple Grove-based division builds coordinate-measuring machines (CMMs) used in aerospace, defense, and other industries, plus optical, multisensor, microscopy, and X-ray systems. Scott Henrickson, the division’s senior buyer in strategic purchasing, describes CMMs as “highly precise measuring systems. They can measure down to the micron level” (1/80th of a human hair). Zeiss’s CMMs also weigh as much as 20,000 pounds.

To ship this valuable equipment from Minnesota to customers throughout the Americas (and sometimes overseas), IPSI provides custom packaging design and production. “The [wooden crates] are designed specifically for the model of machine that we’re building,” Henrickson says. “They require engineering drawings with pretty tight tolerances.” In addition, IPSI warehouses and manages the inventory of the specialized steel bracing used to support the machines. “They just work really well with us,” Henrickson says. “They’re very open to helping us honor our commitments to our customers.”

IPSI strives to be as close to its employees as it is to its customers. Wallace seeks to meet with every new employee within the first two weeks of his or her hire. “Everybody at Independent Packing Services has the same job,” he says. “That job is delivering peace of mind. We just perform different tasks to accomplish that. Everybody’s part is equally important.” IPSI backs up that commitment by offering college scholarships to all employees’ children.
Family members also stay close, gathering together at their lake place in Pequot Lakes and for meetings of the business’ informal advisory board. Wallace says he and his sister use their parents as a sounding board, but “they’ve allowed us to go with our decisions, whether they agree with them or not.”
The Wallace family is now majority owner of two environmental services companies, along with Minneapolis-based Dakota Technologies (a hazardous waste site assessment firm) and Morris-based Info Link (an internet services provider). Prince Wallace is acting CEO of these companies; Joseph Wallace and Andrea Burns are also involved in some management aspects.
Joseph Wallace, who has three kids all under the age of 18, as does Burns, says that it’s too early to talk about if and how the members of the third generation will join IPSI. But as he also notes, “the opportunity will be there.”