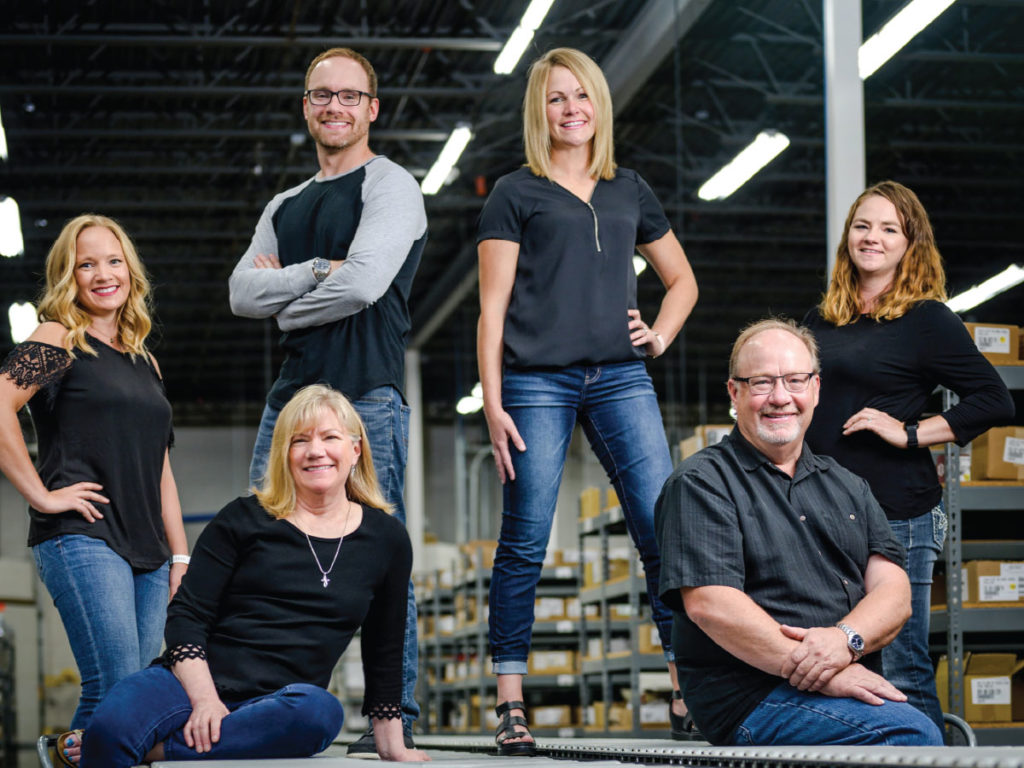 Planning and clear communication keep the tight-knit family in the business.
By Kait Ecker
| October 13, 2020

What the company does Distributor of industrial and construction supplies, including standard and specialty fasteners, machined parts, custom packaging, PPE, and janitorial supplies

Family members in the business 4

Family members on the board 4

The family that owns Ramsey-based B&F Fastener Supply knows how crucial advance planning can be to a business. After all, if the founders hadn’t planned ahead, the company might have dissolved only a few years after it started.

Loren O’Brien and Steve Johnson launched B&F, a distributor of industrial and construction supplies, in 1988. Four years later, Johnson died suddenly. That put the business in a tough spot. But the founders had the foresight to set up a buy-sell agreement that allowed the company to continue.

“For us to have buy-sell agreements in place for that type of a tragedy was actually pretty much unheard-of back then,” Loren O’Brien recalls. As young entrepreneurs working to establish their company, such agreements weren’t a high priority. But both of them had taken out life insurance policies that ensured there would be enough money to buy each other’s stock should one of them die.

“They were out there doing their own thing, they had to make their own name, and they had to be successful on their own—because it wasn’t going to be given to them.”

So even though one of the founders passed on, B&F survived. In fact, it has flourished. The company’s revenue has grown 16 percent in the last five years. The company has made three acquisitions over the past nine years and hopes to have one or two more completed in 2020.

The precedent of advance planning that the founders established has also allowed B&F to advance into a second generation of family ownership. In 2013, 90 percent of the ownership was transferred to Loren O’Brien’s four children: Nicole Baltes, Aryn Young, JJ O’Brien, and Kari Aguilar.

But there was still the question of who would do what in the business.

“We basically had a family meeting, and we laid out what everyone’s intentions were,” Baltes says. Right off the bat, Young knew she didn’t want to be in top management. “They would call me the full-time cheerleader here,” she says. “If I had to go fire somebody, I would probably end up leaving and giving them my job.” Instead, Young worked her way into her current role as director of marketing.

Aguilar opted for a path outside of the business, becoming a special education teacher. JJ O’Brien had the interest in and aptitude for top leadership, but he was just 22 and still learning the ropes. With his parents’ encouragement, he focused on manufacturing support, with an eye toward eventually overseeing operations. Baltes, his older sister, assumed the role of president in April 2019, when she was 33.

“They weren’t really being supervised by me or anything like that,” Loren O’Brien says of his offspring. “They were out there doing their own thing, they had to make their own name, and they had to be successful on their own—because it wasn’t going to be given to them. They had to show that they could be successful without the old man’s name behind them.”

The three siblings who remained directly involved spent time in different parts of the company. “Through the transition, my dad has done a good job of teaching us some things,” Baltes says. “His way of teaching—we call it the school of hard knocks. He lets us fail because he knows we’re going to fail, but lets us pick ourselves back up, learn something from it, and fix it and move on.”

That approach has paid off. “The next generation does not have any sense of entitlement and is really driven to take the company even further and beyond what it was when they took it over,” says Todd Boone, executive vice president of operations and a nonfamily member who’s been with B&F for nearly 30 years. “And they’re looking toward the future and making investments and looking to expand and make us a better company.”

While Loren O’Brien still retains the title of CEO, he has stepped back significantly from day-to-day operations and leadership responsibilities, acting more as a kind of consultant and acquisitions specialist. “To watch him actually transition since I took over just about a year ago is actually impressive,” Baltes says. A business’ founder often “has a really hard time letting go, which I totally understand because it’s basically their baby and they started it from nothing,” she adds. “He’s just at that spot in his life where he’s good with it, and I think that’s quite the accomplishment.”

Communication has been vital to the transition’s success. While the siblings’ work responsibilities don’t overlap much, they still had to learn how to interact with each other on a professional level. The siblings understand “how each of us is wired differently,” Young notes. Estate planning and annual family meetings also help keep everyone on the same page. “As awful as those meetings can be—and they’re super-morbid—the reality of that is if something unfortunately happens to someone, everybody should have that clear picture of what that looks like in the family and in the business,” Baltes says. “Because that’s where it seems like a lot of families get torn apart.”

Family members are also very conscious of how they communicate outside the office. “We do a really good job of keeping work at work,” JJ O’Brien says. “We’re a really close-knit family, we always have been.” Their mother, Barb, “has done a really good job of making sure that we do balance that work life and that personal life,” Young says. “She had kind of made it a rule that we weren’t allowed to talk work at family functions.”

The third generation is still in pre-school but not surprisingly, the family is thinking ahead. “I certainly don’t want to put the pressure on any of our kids or my niece,” Baltes says. “I do talk to my kids about it, and they can spot a B&F truck from a mile away. So my hope is that some of that education and openness about it may be encouraging and exciting for them, and that they will want to get into it.”