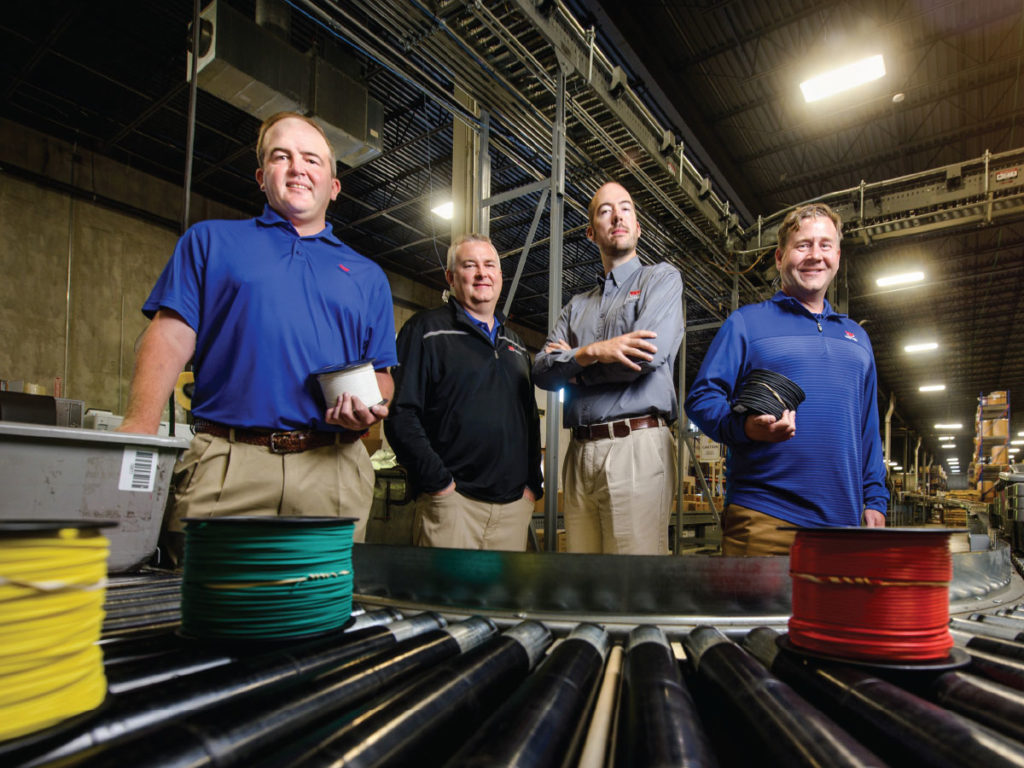 Dedicated to company growth, the second-generation is happy to have an outside person at the helm.
By Kait Ecker
| October 13, 2020

Family members in the business 6

Family members on the board 6

For many family businesses, maintaining success means tapping leadership skills outside the family. That’s been the case for Chanhassen-based Waytek, a distributor of electrical components that manufacturers of wire harnesses and other assemblies use in automobiles, trucks, agricultural machinery, construction equipment, and other types of vehicles. Brothers Wayne and Norm Larson sold the business to their sons in 2003, though they remained co-chairmen of the board. Still, the four new owners had to decide who would be the second in command; they all were interested.

Ultimately, the answer was none of them. Instead, they named Waytek manager Bob Lamoreaux president, determining that was the best way to ensure growth.  (Lamoreaux’s loyalty was a given; he was hired in 1972, at age 16, as the company’s first nonfamily employee.)

It worked. The company has been thriving for years—in the past five years alone, Waytek’s revenue has grown more than 36 percent. The Larson family credits Lamoreaux as being instrumental in the company’s growth.

Wayne Larson started the business in 1970, representing manufacturers of electronic instrumentation. Soon after, Minnesota-based tractor manufacturer Raygo asked whether Larson could manufacture wire harnesses for its vehicles. He could, and the move paid off. His brother joined him in 1972, and, after listening to their customers, Waytek shifted from manufacturing to electrical components distribution. By 1998, Waytek had doubled the size of its facility. In 2006, Waytek doubled its footprint once again, to 100,000 square feet, when it moved into its current location.

That same year, the four sons brought in consultant Charlie Kanan as a business and family advisor to ensure a transition that would keep the company on track for growth. Kanan worked with the owners on training and development and to solidify their vision of what the company would become. He also encouraged them to talk with other successful multigenerational family businesses such as Chaska-based KleinBank (acquired in 2018 by Indiana-based Old National Bank). The Klein family advised the Larsons to bring in outside people for leadership.

With that advice and the focus on Waytek’s growth, the second generation decided that the best person for CEO and chairman was Kanan. In 2012, he succeeded Wayne and Norm Larson. “It was an honor for me, but it had nothing to do with my long-term plans,” says Kanan, who hadn’t anticipated taking on a permanent leadership position with the company. “But I felt so comfortable with the way things were going.”

The sons also decided to work in the jobs that suited them best, although at least one of them has a hand in almost every aspect of operations, says Mark, one of Norm’s two sons. The oldest of the four, he focuses on sales and account management. His brother, Peter, works in accounting and human resources. Wayne’s son Mike serves as the chief operations officer. He was mentored by Lamoreaux, who retired in 2016. His brother, John, attends to finance and business development.

In many ways, the company’s organization changed little from their fathers’ days, but the transition to outside people in high-level leadership has allowed the sons to become adept shareholders and active business partners in their respective roles. And, of course, their company continues to flourish.

“If you take care of and do right by your employees, they’ll do a nice job of taking care of your customers.”

At work, the brothers and cousins interact as fellow employees; they see each other frequently at board meetings and the family’s quarterly continuation-plan gatherings. “The families not only talk about where they want to go, they start developing better and better relationships with each other,” Kanan says. “So when times are tough, they know how to communicate.”

Growing up, the men remember their dads being home for plenty of family time in the evenings. Now they try to do the same. The Larsons take a straightforward approach to separating work and family life, following their fathers’ philosophy. “Just focus on work when you’re at work, home when you’re at home,” Mike says.

The sons also have continued their fathers’ legacy that employees are at the core of the company culture, so it’s no surprise members of other families work side by side at Waytek, some for multiple generations. “I feel like it says a lot about our culture if somebody wants to have their spouse or their kids work there,” Mark says.

Part of the second generation’s approach to leadership has been demonstrating dedication to both their employees and their community. During the Great Recession, when work slowed down, Waytek sent employees to volunteer at Feed My Starving Children while keeping them on payroll. During the pandemic, the company has avoided layoffs despite the tumultuous economic times.

“Think of your employees as your first customer, and your actual customers as the second customers,” Mike Larson says. “If you take care of and do right by your employees, they’ll do a nice job of taking care of your customers.”

Beyond prioritizing their customers and employees, the Larsons emphasize teamwork, based on a foundation of honesty, trust, and communication. “We always try to just operate in an ethical, straightforward, and honest manner,” John says. “We’re pretty old-fashioned in terms of business ethos.”

Wayne and Norm Larson wanted to be sure the family name didn’t give their kids any special advantage; part of that involved the sons spending summers through high school and college doing jobs of every variety at the company, including warehouse work. None of them started in management. “I don’t think any of us really ever play the ownership card,” John says. “If someone has a complaint or wants to discuss something, they can treat us as equals. So we leave big ego issues at the door.”