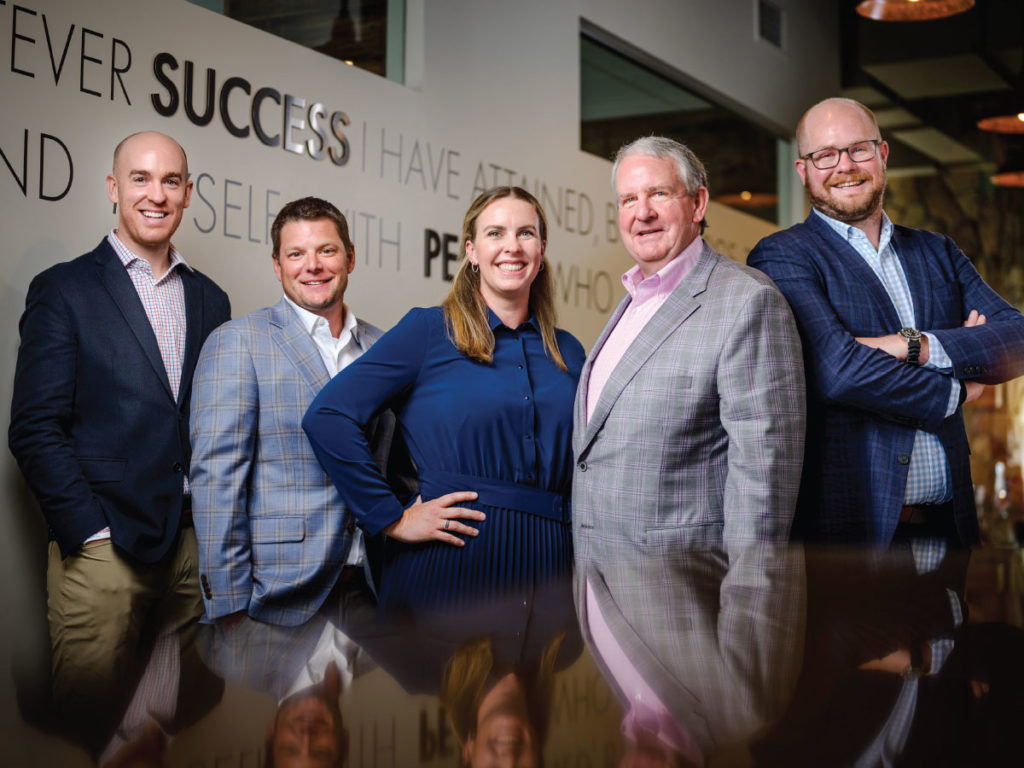 It has become a national—and international—property developer by maintaining a family feeling among employees and clients.
By Dan Niepow
| October 13, 2020

Family members in the business 8

Family members on the board 1

Joe Ryan, founder and CEO of Excelsior-based Oppidan Investment Co., says he was never suited to work for someone else.

“I realized at a young age that I’m not a very good employee,” jokes Ryan, who founded Oppidan in 1991 after running the U.S. division of U.K.-based real estate advisor Richard Ellis Inc. He might have joined Minneapolis-based real estate giant Ryan Cos., where his brother Pat now serves as chairman. Instead, “I wanted to run my own deal,” Joe Ryan says. “I wanted to control my own destiny.”

The move turned out to be a fruitful one: Oppidan has become a national property development firm. It has completed more than 500 projects, valued at nearly $4 billion, covering 23.5 million square feet in 38 states and parts of Canada. The company’s portfolio includes supermarkets, industrial sites, apartments, and senior residences.

Ryan didn’t set out to create a family business when he established Oppidan. But as his children grew up and took an interest in the company, Oppidan has indeed evolved into a family-run operation. Ryan’s son, Tom, is the company’s vice president of people and culture, while his daughter, Kelly Allman, serves as vice president of corporate affairs. CFO Matt Allman is her husband. President Blake Hastings is married to Joe’s niece Carey. Joe’s other son Jack Ryan, works for sister company Water Street Partners. “It’s become a real joy,” Joe Ryan says. “We’ve got family across the board.”

“The rule is nothing professionally is going to get in the way of personal relationships.”

At Oppidan, familial feelings extend to employees. Most work at the firm’s Excelsior headquarters. The company has three employees at its office in Walnut Creek, Calif., and another four in Cary, N.C. “Through different geographies, they’re all included—they’re treated as family,” Hastings says. “Our retention rate is incredible because of that.”

The company also has developed a strong history of retaining clients. Kris Kowalski Christiansen, CEO of Woodbury-based Kowalski’s Markets, describes Joe Ryan as a fair, transparent dealmaker. She worked with him to develop new Kowalski’s stores in Excelsior and Shoreview. “It was old-school handshake deals with him,” Christiansen says. “You knew what you were going to get. You didn’t have to worry about ulterior motives. Everything was above the table.”

The Excelsior Kowalski’s store now shares a parking lot with Oppidan’s headquarters, so it’s easy for Christiansen to grab lunch with Oppidan leaders and share new ideas. She says Oppidan was a strong partner throughout the development of new stores. “[Joe] does look at you as more than a partner in business—he looks at you as a friend.”

Oppidan is a strong commitment as a civic presence, too: For the past several years, the company has been a platinum-level sponsor of the Kowalski’s 4 Kids Golf Tournament, which benefits local charities.

“They’re good community members,” notes Jon Lundberg, president and CEO of Edina-based senior residence management company Ebenezer. Working with Ebenezer, Oppidan has built several senior living communities around the Twin Cities. In mid-May, Oppidan opened the 340,000-square-foot Pillars of Prospect Park near the University of Minnesota Minneapolis campus. Oppidan’s leadership remained tied into the project right until residents moved in, Lundberg says, to ensure the new community was safe for move-in amid the pandemic. That kind of conscientiousness “says a lot about them as an organization.”

Al Dittrich, retired chief operating officer of Wisconsin-based Duluth Trading Co., says Oppidan is “the best of the best.” Working with Oppidan, Duluth Trading opened more than 20 new stores across the country from 2015 to 2019. “They were very good at finding ways to help us save money,” Dittrich says. “It always felt like they were another arm of the company, rather than a third-party contractor.”

Dittrich worked with Oppidan prior to Duluth Trading. In the late 1990s and early 2000s, Dittrich was executive vice president of marketing and merchandising for then-St. Paul-based outdoor sports and recreation retailer Gander Mountain, a role that put him in charge of opening stores across the country. His development partner during that time? Oppidan.

“They were very much on time and on budget,” Dittrich says. “And when issues would come up, it wasn’t about pointing fingers; it was about figuring out how to get it right. That was so refreshing.”

Oppidan’s future looks bright, despite current uncertainties. Hastings says the company has remained “cautiously aggressive” during the pandemic. Oppidan also has demonstrated nimbleness and a willingness to diversify. Hastings points to the recession that began in 2007. Retail had long been Oppidan’s bread and butter, but when the recession struck, the company quickly ventured into residential and industrial projects to stay afloat. (One of those projects was a 52,000-square-foot oil and gas facility for General Electric in North Dakota’s Bakken region.) “The future has some uncertainty for all of us, but we’re still plowing ahead,” he says.

Especially during unpredictable economic times, it’s been important to keep family ties strong. Whether at a Sunday-night dinner or at the kids’ baseball games, the clan maintains clear boundaries between work and family. Of course, it’s not always easy. “At times, it’s a challenge because we’re a tight-knit group as a family and a tight-knit group as a company,” Matt Allman says. “But we find time to unplug and not talk about business.”

Joe Ryan puts it this way: “The rule is nothing professionally is going to get in the way of personal relationships.”

Still, business and family can’t help overlapping at times—which might open the door to the third generation’s involvement in Oppidan. “Growing up, my brothers and I would roll our eyes when my dad would make us drive by a site on our way to or from the cabin, or when we were out and about,” Kelly Allman says. “But now, Matt and I do the same with our kids.”