She took a summer job at her family’s broadcasting company—and went on to build a nationwide radio business.
April 01, 2020 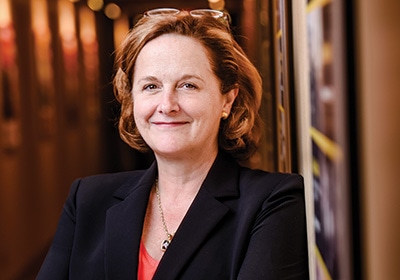 Had Ginny Hubbard Morris’ younger self gotten her way, she might never have joined her family’s broadcasting business. But as her remarkable radio career has proven, her father knew best.

Morris—the granddaughter of Hubbard Broadcasting’s founder and one of five children of current CEO and chair Stanley S. Hubbard—was a teenager when she began working as a hostess at Mr. Steak. “I wanted to work at McDonald’s,” she says. “But my dad said, ‘I want you home by 10,’ and Mr. Steak closed at 9.” In any case, “I thought public relations or hospitality would be where I would base my career.”

But Dad had his way again in 1982 when Ginny was in college. “He said, ‘I want you to try the family business for the summer,’” Morris recalls. “And he said, ‘If you don’t like it, I’ll stop bothering you.’ ”

Her father knew something about her she didn’t. That summer, “I got bitten big,” Morris says. “The work was varied, and the people were fun and creative. To be in a business that is so immersed in the community was a compelling draw for me.”

Morris’ trajectory can be traced from her first job in the company’s promotions department to managing that department by 1985. But it was in 1990, when she became manager of KSTP-AM, that she fell in love with the radio industry. While there, she revitalized the station by turning it into the state’s number one talk-radio outlet with attention-getting on-air personalities such as Barbara Carlson (famous for her hot tub interviews). Morris’s success with KSTP-AM earned her a promotion to president and general manager of Hubbard’s Twin Cities radio stations in 1995. Four years later, she formed the Hubbard Radio Network and began syndicating shows based in the Twin Cities throughout the Upper Midwest. In 2000, she became president of Hubbard Radio, which operates three Hubbard stations in the Twin Cities: MyTalk FM 107.1, 1500 ESPN and KS95-FM.

Under Morris’ guidance, Hubbard has grown into one of the leaders among U.S. radio broadcasters, particularly via two high-profile acquisitions in which it added stations in six major metropolitan markets. Hubbard bought 17 stations in Washington, D.C., Chicago, St. Louis and Cincinnati in 2011 for $505 million from Bonneville International Corp. Two years later, it spent $85.5 million to purchase 10 stations in Seattle and Phoenix from Sandusky Radio. In 2015, Hubbard paid $8 million to Omni Broadcasting for 16 radio stations in greater Minnesota. Last year, WTOP-FM, Hubbard Radio’s Washington, D.C., news station posted revenue of $65 million, making it the highest revenue-generating radio station in the U.S.

One of the accomplishments of which Morris is most proud was purchasing WIXK-FM, based in New Richmond, Wis., in 2000 and using it as a launch pad for KTMY-FM, more commonly known as MyTalk 107.1, a female-targeted talk-radio station. MyTalk 107.1 broadcasts The Lori & Julia Show, a wildly popular three-hour daily gabfest hosted by sisters-in-law Julia Cobbs and Lori Barghini.

In the late 1990s, the Twin Cities radio market began to consolidate, with many stations (particularly FM) acquired by national concerns such as Clear Channel and Viacom. They shed staff and some locally based content to cut costs. Hubbard chose to grow rather than be swallowed up. These days, Morris says, the radio business “definitely has become a lot more fragmented. We’ve always been fortunate enough to have been raised on the idea that radio stations need to be local—local service elements, local community happenings, news elements, that kind of thing.”

This vision provided opportunities for Hubbard to expand. “She saw talk radio with a special interest for women as not just something topical, but a great business opportunity,” says John Dille, CEO of Federated Media, which provides content marketing to digital and TV channels, including many of Hubbard Radio’s stations. “That decision,” he says, “along with some dedicated employees, has produced great radio for Minneapolis-St. Paul.”

Morris acknowledges missteps along the way, but she doesn’t permit them to influence future decisions. “There were circumstantial failures, certain efforts that didn’t work out,” she says. “Sometimes the people I hired to be on the radio or off the radio turned out not to be, in retrospect, terrific choices.”

Still, most have paid off. In 2013, the National Association of Broadcasters presented her with the National Radio Award, among whose previous recipients were Howard Cosell and Larry King. She also has served as the organization’s first female board president.

Morris maintains her humility amid the accolades: “Really, while I’m the front person for the radio part of the business, this is very much a family business,” she says. “In spite of the fact that leading the charge in radio is my task, I do it on behalf of my family . . . and with a tremendous team of people.”