He built one of the nation’s most successful minority-owned construction companies—and helped build the Twin Cities’ major sports venues.
April 01, 2020 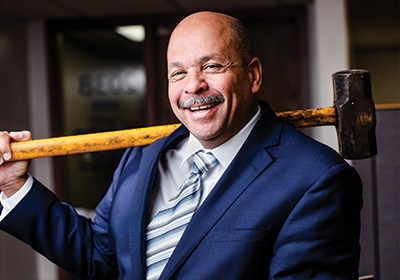 “We’re still not there.”

That’s what Richard Copeland replies when asked when it occurred to him that his company was competing at a high level in the local construction market. The answer might seem surprising.

The founder and chairman of Thor Construction, Copeland has used a combination of intelligence and savvy to build his company into a perennial player in the Twin Cities’ crowded construction market. The company boasted revenue of more than $150 million in 2015, and has garnered praise for its work on such high-profile local projects as U.S. Bank Stadium and TCF Bank Stadium, as well as numerous Super Target stores and countless residential projects throughout the state. Thor has expanded to seven other states and has been honored as one of the most successful minority-owned businesses not only in Minnesota, but in the nation.

But does that make Copeland happy? Yes and no. A conversation with the 60-year-old brings forth a torrent of mixed feelings about the systemic racial disparities in the construction business. He acknowledges gratifying milestones, such as the company’s work for the Minneapolis Public Housing Authority and Thor’s work on the metro’s new stadiums. But these days, “about 85 percent of our business isn’t in Minnesota,” he says. “We know how to find minority workers, we know how to train them, we know how to vet them. But without the opportunities to get work here, we can’t make the difference we want to make in our own community.”

Copeland comes by his blunt nature honestly. His father, a Chicago native, ran a trucking company in North Minneapolis, stowing a .45 automatic pistol under the front seat of his pickup. Copeland was born in the old Sumner-Olson housing project. (It’s about 100 yards from where he now lives, in the Heritage Park development that Thor built.) After two years of college, Copeland went to work with his dad, an arrangement that, shall we say, didn’t end well. (The details of the junior Copeland’s termination involve that pistol and an exchange that can’t be recounted in a family magazine. But he now owns 60 percent of the trucking company.)

At loose ends in the late ’70s, Copeland saw his destiny in a group of NSP workers he watched while idling on a street corner. “I followed them back to their office and went in the front door while they went in the back door,” he recalls. “I told the man at the desk that I could do utility restoration work. It was September then, and they had a big overflow of work that had to get done before winter. I thought, ‘This is the beginning of my business.’ ”

After spending his last $200 to get insured, Copeland found himself with more outsourced utility maintenance work orders than he could fill. That soon led to miscellaneous construction jobs and, in 1980, the formation of Thor. Copeland called everyone he knew who owned a truck and wanted to work, providing them ad hoc training during projects. “I’ve always been kind of a hustler,” Copeland says. “I knew how to leverage my ability to get work and find people who knew how to perform the work.”

As for the name, it started as a sarcastic response to an African-American showing up for construction opportunities that were typically reserved for individuals of Scandinavian descent. As Copeland recalls, “One night after a long day’s work, I went to a bar and when I came out I was surprised to see ‘THOR’ spray-painted on my truck. The rest is history.”

Esperanza Guerrero-Anderson has known for years what Copeland and Thor were capable of. As founder of Milestone Growth Fund, a venture capital fund that helps minority entrepreneurs, she has known Copeland for three decades and she invested almost $200,000 in Thor when it was starting to win bigger contracts but was short on capital. “He’s very hard-working, and also very creative,” says Guerrero-Anderson. “Once he wanted to do some snow removal work, but couldn’t afford a plow. So he tied plywood to the front of his trucks to remove the snow.”

Growth was slow but steady, with the company hitting the million-dollar mark in revenue in the early 1990s. By the late 1990s, Thor began to expand quickly. Copeland credits its ability to secure large contracts through organizations that support minority business development and positive reviews from partners such as Mortenson Construction. Thor now has almost 200 employees and a national client list that includes MGM, Target and the University of Minnesota.

While Copeland has no firm timetable for retirement, he is informally planning to turn Thor over to Ravi Norman, the CFO-turned-CEO who has led a resurgence in the company’s revenues over the past few years and whom Copeland classifies as a prodigy when it comes to evaluating and nurturing young construction talent. Copeland also plans to move his headquarters from Fridley to North Minneapolis. He sees the neighborhood as in need of both jobs and development, and wants to make Thor an economic driver where he grew up.

“I want my legacy to be that I fought the fight, as much harm as it’s done to my company’s growth,” Copeland says. “I’ve been a leader for fighting for the inclusion of minority-owned businesses in the mainstream of this economy. I always tried to make the community better.”