A textbook serial entrepreneur who’s succeeded in a wide variety of businesses, from oil change to real estate.
April 01, 2020 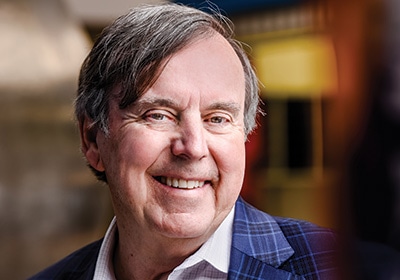 “For some reason, Ed has chosen to try a lot of different businesses, which hasn’t made his life simple, yet he has been successful in most of them,” says Glen Taylor, billionaire entrepreneur and owner of the Minnesota Timberwolves. “It takes a very talented person to take in a new business, understand it, put the correct group of people together and then grow it. He has a unique knack for that.”

Indeed he has. Over the past 28 years, Ed Flaherty has bought or started more than 30 companies, and in the process, he estimates he has created 10,000 jobs.

A mathematician turned entrepreneur, Flaherty started his first company, a computer data services firm, at the age of 26, while working as a high school math teacher and football coach in his native Montana. He left teaching after a year (“It wasn’t a good fit for me for a variety of reasons,” he says) and in a couple of years left for Minnesota, seeing an opportunity to be in a larger market for his services.

“I was officing in Pentagon Park [Edina] with my computer business, and whenever I had to have the oil changed in my car, I had to leave it at the Texaco station for the whole day,” Flaherty recalls. That experience, and the vast number of cars he saw in Pentagon Park’s lots, inspired Flaherty in 1976 to launch Rapid Oil, a quick-oil-change business that was the first of its kind in the Twin Cities. The idea took off, fast—within a decade of its founding, Rapid Oil had 83 locations nationwide.

“Once Rapid Oil started it was like a cookie cutter; we kept putting them out,” he says. Flaherty sold Rapid to Ashland Oil in 1986, then went to work for Ashland as part of the contract. But he found that “they felt I was a cowboy in their very structured company.” After a few years, Flaherty hit the entrepreneurial trail once again.

This time, instead of starting his own business, Flaherty started five, albeit with partners. “In the beginning of 1989, I had no businesses, but I had capital that I invested in five things that ended up being the foundation of my holdings.”

With four other investors, including Minneapolis attorney Michael Snow, an attorney at Maslon in Minneapolis, Flaherty opened the first Applebee’s franchise in the Twin Cities. “Applebee’s was an opportunistic investment,” Flaherty says. “Mike learned of the opportunity as a lawyer and was able to secure the first franchise agreement. I knew the real estate business, having opened Rapid Oil locations, and our partners in Cleveland knew the food business.”

He and his partners saw Applebee’s as filling a niche in the casual dining segment, focusing on smaller locations and lower prices. They grew their holdings to 160 restaurants, with 14 in the metro and additional master franchise agreements in several other states. The investment team eventually sold its stores starting in the late 1990s.

Also in 1989, Flaherty, his brother Dennis, and Snow bought the old Rodeway Inn near the Minneapolis-St. Paul airport and converted it into a Comfort Inn, which eventually led to the team owning six other hotels. Flaherty’s third 1989 investment was in a sign manufacturing company, a joint venture with 3M, which was introducing an innovative four-color printing process. Flaherty’s partners in this enterprise included pizzeria owner Rose Totino and members of the Hamm family of brewery fame.

It did not have legs. “3M decided it wasn’t going to be what they hoped it would be,” he recalls. Flaherty parlayed his share of the assets and started another sign manufacturer, Sign Zone Inc., one of two companies he still owns. The firm manufactures and sells lightweight, portable, affordable displays used in trade shows, events and product launches.

Flaherty’s fourth 1989 investment was Minneapolis-based Miller Milling. “I was the caboose investor,” Flaherty states. “John Miller, Mike Snow and Mike’s father, Glen, had the company started, and they ran out of money. John drove that company. I didn’t know what I was doing. When we were at our peak three years ago, we were making 40 percent of the semolina in the United States.”

Lariat Cos., the other company Flaherty still owns, was his fifth investment with roots in 1989. He began buying vacant land surrounding Eden Prairie Mall, later developing the land with strip centers. “We kind of own downtown Eden Prairie,” Flaherty says.

His most recent venture is a family foundation, run by his oldest daughter, Beth, that provides scholarships to promising low-income eighth-grade students to attend private college-prep high schools. “In the second year of this plan, we have 160 to 170 students in scholarships,” Flaherty says, “and we are adding 100 per year, all in the Twin Cities.”

There’s a lot those students could learn from Flaherty. “Ed is very wise when it comes to business decisions. He has a very good mind that goes through all the alternatives before making a decision,” Taylor says. “He is a strong personality, an A-type personality, and he’s fun to be around.”