He built two hugely successful IT companies—and a third could be on the way.
April 01, 2020 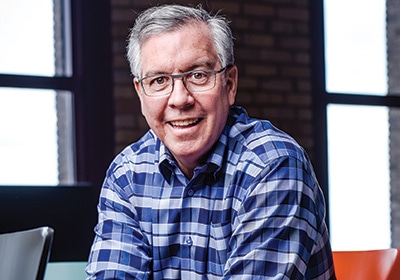 The term Twin Cities serial IT entrepreneur Phil Soran coined to describe himself and the culture of the remarkable businesses he has launched is “positive-aggressive.”

Put simply, “positive aggressive” combines “doing what it takes to win,” while doing so ethically. “There are a lot of ‘negative aggressive’ business models out there,” Soran notes. But his goal, besides building strong businesses, is to have people “feel really good about working with us.”

With Soran, there’s a lot to like. The Colorado native is affable and down-to-earth. At the same time, he knows what he’s achieved. As cofounder of XIOtech and Compellent, Soran helped launched two of the most successful digital data storage companies in the country—and in a state that doesn’t have the tech cachet of Silicon Valley or greater Boston. You could say he did it the Minnesota way, with hard work, minimal flash and Midwestern friendliness.

Soran started out as a middle-school math teacher, but “didn’t see myself teaching the same algebra class for 30 years.” On a whim, he cold-called the local IBM office about a job. He underwent IBM’s rigorous one-year training and was soon on its fast track. Among other assignments: “I was the person who closed the big mainframe storage deals.”

In 1989, IBM made Soran its Twin Cities branch manager. Some years later, it wanted to send him East, but Soran wanted to stay in Minnesota. Besides, “I had always wanted to do my own thing,” he recalls. Soran first went to work for Prodea Software, a small company whose CEO “let me learn about raising money, which became a very valuable skill for me.”

He soon put that skill to work. Soran had befriended computer engineers Larry Aszmann and John Guider. The three spent weeks brainstorming business plans. In 1995, Soran quit his job and the trio launched XIOtech in the basement of Soran’s Eden Prairie home.

“I look back and I can’t believe I started a company,” he says. Some days the pressure of launching into the unknown, with a large family to support, could feel nearly overwhelming. But “pressure can cause great things to happen,” Soran says. And great things were what the XIOtech founders achieved.

“I was more the salesman, CEO and fundraiser,” Soran says. “John had more hardware expertise and management background; Larry had more software expertise.” Their innovation was a storage area network for digital data. Storage systems 20 years ago were mainframe-based; put very simply, what XIOtech developed was a system where multiple servers could create a common storage pool. The results: greater efficiency, lower cost and better performance.

By being ahead of the market, the XIOtech guys found that the market came to them, and their company attracted a broad range of customers and millions in venture money. In 1999, Silicon Valley storage giant Seagate made a $360 million offer, a deal that closed in January 2000. Soran stayed with Seagate for a while. Then the entrepreneurial bug bit again. “We went back to the same basement and started Compellent,” Soran says.

With Compellent, lightning struck twice, with the second bolt even stronger than the first. Compellent’s technology prioritizes data based on usage. Frequently accessed data is stored in the first “tier,” where it is readily available. Infrequently used data is stored on less expensive lower tiers. This approach, Soran says, can free up 75 percent of their existing storage capacity, and save data centers up to 70 percent of their energy costs.

With digital data exploding and storage space at a premium, Compellent became one of the world’s fastest-growing storage companies, going public on the New York Stock Exchange within five years. In 2011, Dell acquired Compellent for just under $1 billion. “We called it B2B—basement to a billion,” Soran recalls.

“Compellent did some pioneering things—stuff that’s standard now,” says Scott Winslow, president of Winslow Technology Group in Waltham, Mass., a XIOtech employee who became a Compellent reseller after launching his own IT consulting company in 2003. Soran “has a way of making people feel really good,” Winslow says, whether those people are customers, employees and resellers. Winslow also praises his old boss’ ethics: “He wanted to win, but in the right way. He didn’t want us saying anything bad about our competition. He wanted us to talk about what we could do.”

After selling Compellent, Soran says, “I was sure I was done.” For a few years, he focused on philanthropic endeavors (primarily in education) that he and wife Margie have pursued through their foundation. A little over a year ago, Soran and fellow Twin Cities tech entrepreneur Jim Leslie met Charlie Miller, a University of Minnesota education professor who’d developed Flipgrid, a digital technology that allows students and instructors to communicate and collaborate via short videos.

Soran and Leslie were enthralled by Flipgrid’s possibilities. The two longtime friends created a business plan, raised money, and made Miller’s technology the basis of a new Minneapolis-based company called Vidku, which has raised $17 million.

Could Vidku be Soran’s third tech win? And will it stay in Minnesota and not migrate to one of the coasts, as so many Minnesota-born technologies (and talented technologists) have done? Soran thinks so. He believes Minnesota has become more encouraging to entrepreneurial companies than when he started XIOtech and Compellent, which found customers more readily outside its home state.

“My success is really the culmination of a lot of people’s work—my partners’, my employees’, my customers’ and our investors’, too,” Soran says. That’s something he and everyone he’s worked with can feel good about.