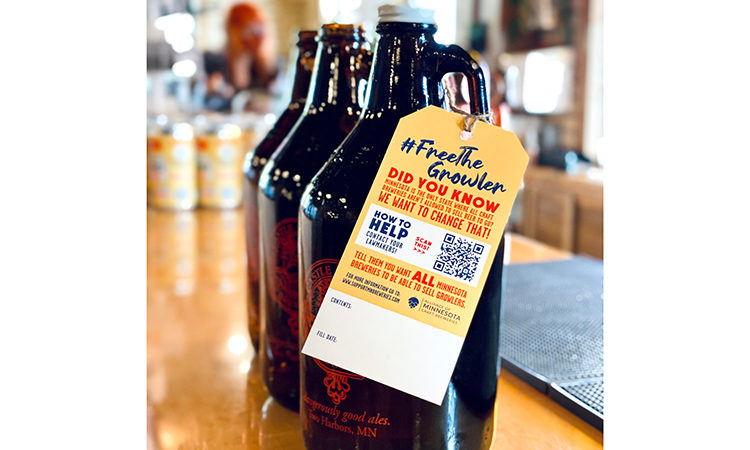 Castle Danger Brewing had to stop selling growlers from its taproom in Two Harbors almost two years ago. But, thanks to a loophole in Minnesota law, customers will soon be able to buy the brewery’s growlers in Minneapolis.

On Tuesday, Minneapolis-based Indeed Brewing Co. will begin selling its own beer in Castle Danger’s growlers. Tom Whisenand, Indeed’s CEO, says it’s a playful workaround designed to raise awareness about Minnesota’s cap on growler sales. Under Minnesota law, breweries are prohibited from selling growlers, crowlers, or other off-sale products in their taprooms once they begin producing more than 20,000 barrels a year.

Indeed hasn’t hit that mark quite yet, which means the brewery can continue selling growlers—even those from other breweries. But Whisenand is well aware that that the state’s cap on growlers will eventually impact his operations, just as it has affected peer breweries.

“We believe in a level playing field for all craft breweries,” he said.

Today, Indeed produces around 15,000 barrels of beer a year. Whisenand expects his brewery to surpass the 20,000 mark within the next two-and-a-half years.

Each Castle Danger growler sold at Indeed will include a leaflet with information on Minnesota’s growler cap, along with steps that consumers can take to change it, if they’re so inclined.

“If customers want to help breweries, we encourage them to contact their lawmakers,” said Jamie MacFarlane, chief financial manager at Castle Danger. “The more lawmakers hear from their constituents, the more likely they are to be supportive of change.”

This year, lawmakers on both sides of the aisle in the Minnesota House and Senate have introduced bills that would remove the growler cap, though neither has made it to the governor’s desk quite yet.

Indeed’s marketing team first pitched the idea to Castle Danger a few months back, MacFarlane said. Both breweries are part of the Alliance of Minnesota Craft Breweries, a group of six brewers seeking legislative change.

Why put restrictions on growler sales in the first place? In Minnesota, the goal has been to preserve the integrity of the “three-tier system,” i.e., the combination of alcohol producers, distributors, and retailers. The growler cap is intended to ensure that no “tier” has a business advantage over another. But Minnesota craft breweries have long argued that the cap limits their ability to grow.

“Castle Danger has grown because they’ve developed beers that people want to drink,” Whisenand said. “Those beers were developed in their taproom and sold in growlers and crowlers to start.”

Neighboring Wisconsin has no such limitations on growler sales, which has made that state an attractive place for some Minnesota brewers.

As has been the case for many industries, the pandemic has had a significant impact on Minnesota’s craft brewers. According to a recent report from the University of Minnesota Extension, craft breweries in the North Star State saw their revenue decline by about 18 percent on average last year. Growler sales aren’t necessarily an enormous part of any brewery’s sales, but they do play an important role in keeping many breweries afloat.

When Castle Danger lost the ability to sell growlers, the company saw an “immediate 30 percent decline in taproom sales, which is pretty devastating to us in such a small community,” MacFarlane said.