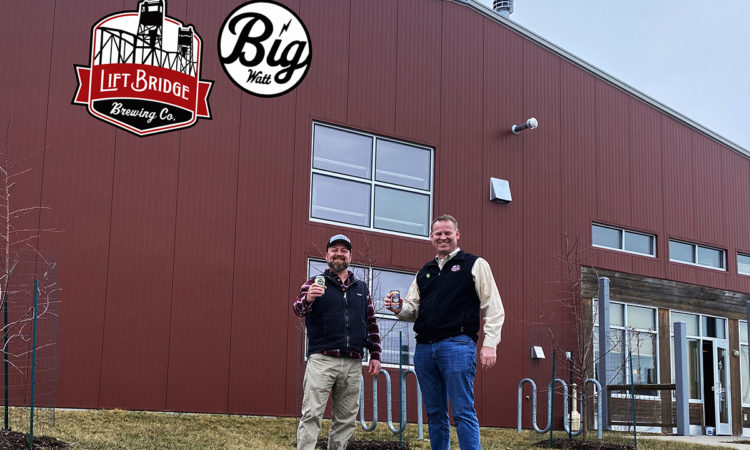 Another alcohol producer ditching Minnesota for a state with friendlier liquor regulations? Well, not exactly.

Stillwater-based Lift Bridge Brewing Co. on Wednesday announced plans to open a new taproom and production facility in New Richmond, Wisconsin. Lift Bridge co-founder and VP of marketing Brad Glynn concedes that Wisconsin’s laxer brewery regulations were an “added benefit.” But they were “certainly not the primary motivation” for the expansion.

In reality, it was more about being in the right place at the right time, with the right connections. Lift Bridge will lease the New Richmond space from Big Watt Beverage Co., the company behind the Five Watt chain of coffee shops. Earlier this year, Big Watt opened its own production facility in the same space, which previously housed Barley John’s Brewing Co. Now, Big Watt and Lift Bridge will run a combined production facility in New Richmond.

Glynn said that he’s been friends with the team behind Big Watt for years. The two companies even partnered together to produce an Irish Coffee Stout. When Big Watt approached the Lift Bridge team about taking over the old brewhouse in the facility, Glynn saw an opportunity he couldn’t pass up. Lift Bridge has been “very tight on space” in its Stillwater facility for years, and had long hoped to expand, Glynn said. But the pandemic was a major setback, as it has been for many breweries.

“The New Richmond facility allows us to expand in a pretty inexpensive way, with some great friends,” Glynn said. “It also happens to be 20 miles to the east of us in a spot with much more favorable laws. So, it became a no-brainer.”

Lift Bridge will have the capacity to produce up to 15,000 barrels of beer at the Wisconsin facility. The 1,200-square-foot taproom, meanwhile, will have space for about 60 customers inside and another 48 outside. The taproom is slated to open May 1.

Under current Minnesota law, breweries are only permitted to operate one taproom in the state. Minnesota breweries are also prohibited from selling growlers once they begin producing more than 20,000 barrels of beer a year. In Wisconsin, there is no cap on growler sales. Earlier this year, Lift Bridge joined forces with other Minnesota breweries to seek legislative change.

The news of Lift Bridge’s expansion comes just two weeks after another alcohol producer, Minneapolis-based Tattersall Distilling, announced plans to open a new distillery in Wisconsin. In the Tattersall case, though, the move was a bit more overtly political: Tattersall owner Jon Kriedler explicitly cited Minnesota’s “restrictive liquor laws” among his reasons for expanding to the east.

“I do not think this will be the last craft beverage producer to move operations to another state,” said Bennett McGinty. “We’ve seen a few before this as well. Unfortunately, other states around us tend have laws that better facilitate growth for craft beverages. We will lose jobs and revenue, so yes, this is concerning. It should be a huge concern for the legislature and our governor.”

In the meantime, the guild will continue advocating for changes to the Minnesota’s liquor regulations. There’s bipartisan support for it, Bennett McGinty said, but the guild continues “to be met with roadblocks.”

Even with the Wisconsin expansion, though, Glynn doesn’t anticipate any major changes to Lift Bridge’s Minnesota operations. “We’re not moving anywhere,” he said. “We’re still going to be doing all we’re doing now, and our headquarters will remain in Stillwater.”

The pandemic has taken a bite out of Lift Bridge’s revenue: Glynn said that the company’s 2020 beer sales were down 25 percent over the prior year. But he anticipates brighter days ahead. He points to the company’s continued growth over the past decade.

“I do see a light at the end of the tunnel,” Glynn said. “We’re pretty optimistic that beer drinkers still want to support local. As restrictions loosen up, our beers will be in their hands more and more.”