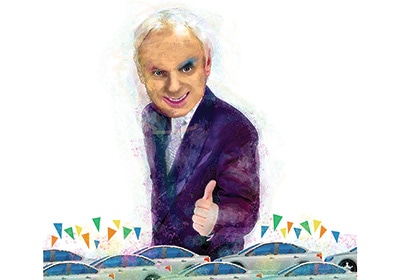 Denny Hecker Could Leave Prison for Halfway House by Next Week

After having his sentence reduced last year for an undisclosed reason, high-profile auto tycoon and convicted fraudster Denny Hecker could be moved to a halfway house as early as next week.

Justin Long, a spokesperson for the Federal Bureau of Prisons, confirmed to the Star Tribune Thursday that Hecker could be moved from the Federal Correctional Institution in Pekin, Illinois—where he is currently detained—to a “residential re-entry center,” or RRC, as early as July 4.

“But this possibility does not mean an inmate definitely will be placed in an RRC,” Long said, declining to elaborate further on Hecker’s case.

Hecker was incarcerated on October 2010 for charges related to falsifying documents to obtain $80 million in financing from Chrysler Financial and then, months later, filing personal bankruptcy to avoid paying off his lenders, while failing to disclose all of his assets.