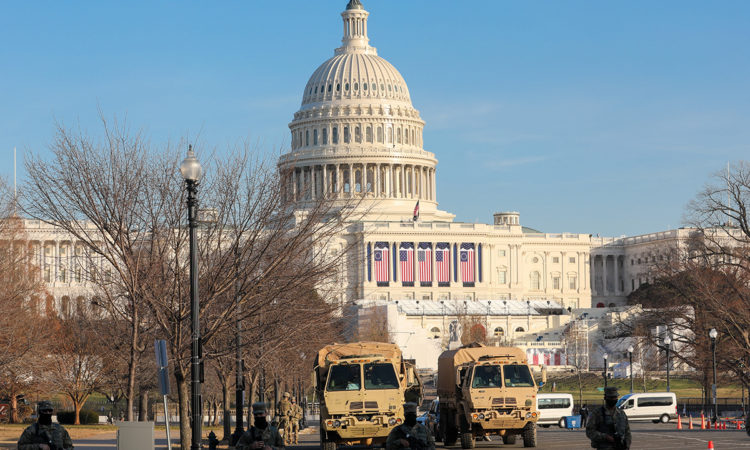 Security was heightened at the U.S. Capitol ahead of Joe Biden’s inauguration. Nicole Glass Photography / Shutterstock.com

After a violent mob took over the U.S. Capitol in early January, dozens of companies pledged to halt or rethink political donations. But the change may not stick around for future election cycles, observers say.
By Dan Niepow
January 22, 2021

It’s always been risky for corporations to funnel money into politics. The insurrection at the U.S. Capitol earlier this month showed just how risky it can be for companies to align themselves with certain political causes and candidates.

After a band of pro-Trump extremists stormed the chambers of the Congress on Jan. 6, several Minnesota companies announced plans to suspend political donations in some fashion. Some vowed to end donations to Republican lawmakers who objected to the certification of the Electoral College vote; others opted to suspend all political donations.

But it’s not yet clear if these changes will stick, or if they’ll even serve as an effective means to change politics for good. Some observers see the changes as “too little, too late.” And indeed, what good is it to halt political donations when there aren’t any major elections happening?

Larry Jacobs, a professor at the University of Minnesota’s Hubert H. Humphrey School of Public Affairs, acknowledged that the widespread pledges to stop political giving are “without precedent.”

“What we’re seeing American businesses do is equivalent to a corporate strike on the Republicans who tried to undermine American democracy,” he said. Even so, he’s not certain the strike will last through midterm elections in 2022.

“I think what we’ll probably see is a resumption of giving around the ‘22 elections,” Jacobs said, “but it’ll be targeted at conservative Republicans who abide by the legal and constitutional process.”

To be sure, blowback from political donations isn’t anything new. Some of Minnesota’s biggest companies are well acquainted with it. Consider Target Corp., which came under fire in Minnesota’s 2010 gubernatorial race for giving thousands of dollars to a political action committee (PAC) known as Minnesota Forward. That group went on to funnel money to Republican candidate Tom Emmer, who opposed same-sex marriage.

The retailer, which had long championed gay rights, was widely criticized for the move. Some even vowed to boycott.

“It was a black eye for Target,” said Paul Vaaler, a professor at the U of M’s Law School and the Carlson School of Management. “It was not good for the Emmer campaign, either, and it made corporations look like they were partisan.”

Of course, that didn’t stop Target or any other companies from continuing to donate in the years that followed.

Most large corporations make a point of donating to politicians on both sides of the aisle, though the unrest at the Capitol could change that. In 2020, Target’s PAC gave $217,500 to Republican federal candidates, or about 53 percent of its total donations, and $191,500 to Democratic federal candidates, or nearly 47 percent of total donations, according to the nonpartisan Center for Responsive Politics (CRP).

“What corporations are trying to buy is access,” Vaaler said. “It’s less about ideology, and more about issues.” For some companies, that could mean donating to a candidate that supports tax changes that are more favorable to their business.

UnitedHealth Group’s PAC had a similar breakdown, though donations favored GOP candidates a bit more: About $656,100, or 55 percent of total donations, went to Republican federal candidates, while $526,500, or 44.5 percent, went to Democratic ones.

Those may seem like some eye-popping figures at the outset, but it’s important to remember corporate PAC dollars are just a fraction of overall political donations. What’s more, the importance of corporate PACs has already been on the wane for the last few years.

According to the Center for Responsive Politics data, donations from traditional PACs represented just 5 percent of all political donations in the 2020 presidential election. That’s down from 9 percent in the 2016 election.

So where is the rest of the money coming from? Individual donations far outshone PAC funding, according to CRP. Donations from individuals account for nearly 64 percent of all donations in the 2020 presidential race, according to the center.

Even so, if corporations decide to resume PAC giving again next year, they’ll need to carefully rethink how they give dollars, and weigh any potential public blowback.

“Corporations will have to look at those investments differently. … Could it come back and bite them?” said Mike Porter, distinguished service professor in the marketing department of the Opus College of Business at the University of St. Thomas. In the age of social media, it’s never been easier for word about a company’s political spending to spread.

In Porter’s view, companies will need to be as transparent as possible in their political spending. And, of course, they’ll need to make a business case for the donations.

“If you’ve got shareholders, you still have to justify that spend,” Porter said. “It’s still in the budget somewhere.”

[Editor’s note: On Friday, March 5, the U.S. Chamber of Commerce – the country’s biggest business advocacy group – sent a memo to members noting that it does “not believe it is appropriate to judge members of Congress solely based on their votes on the electoral certification.” The group also said it “will evaluate our support for candidates – Republicans and Democrats – based on their position on issues important to the Chamber, as well as their demonstrated commitment to governing and rebuilding our democratic institutions.”]