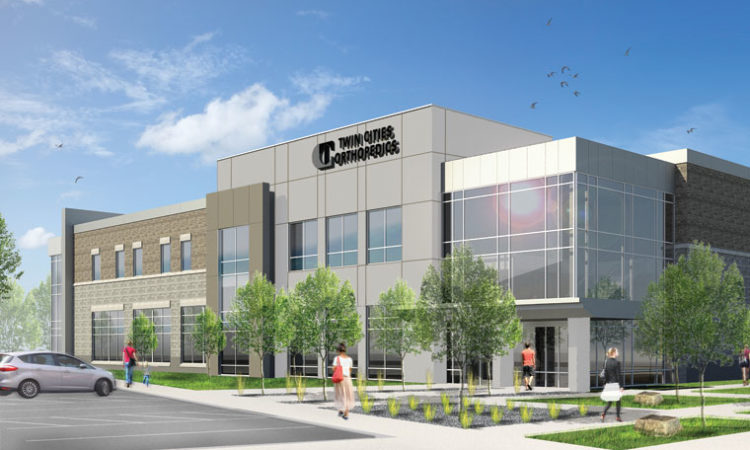 Twin Cities Orthopedics broke ground Wednesday on a new location in Vadnais Heights. The two-story, 21,000-square-foot clinic is slated to open in December.

Troy Simonson, CEO of TCO, said that the new Vadnais Heights location will replace the practice’s current, smaller Maplewood clinic. The project is being built near the Vadnais Sports Center.

“In our sites we’re looking for visibility [and] ease of access in and out of the site,” says Simonson. “Being in close connection with the Vadnais Sports Center is helpful as well.”

TCO has several other projects in the pipeline to further expand its presence in the Twin Cities. An expanded Woodbury facility at a new location opens in September. New TCO clinics are slated to open in Eagan and Blaine in 2018. All of those new facilities will replace other smaller or temporary locations. TCO’s web site currently lists 36 locations in the Twin Cities and western Wisconsin. When TCO's new clinic in Belle Plaine opens this summer, it will mark the practice's 40th location.

Simonson said that many factors are fueling strong growth for TCO: an aging population, an increase in total joint replacement surgeries, and heightened demand for sports medicine and preventative health services. TCO is privately held and does not disclose its revenue.

TCO’s highest-profile project is its Eagan location, which will be on the Vikings Lake site, anchored by a new headquarters and practice facility for the Minnesota Vikings.
TCO currently has a temporary clinic location in Eagan.

“We were the orthopedic physicians for the team…the Eagan market was a market we were actually exploring for the last couple of years,” said Simonson. “When they made the decision to move forward with Eagan we reached out to them and just started discussions…It’s been a great partnership.”

TCO currently has 115 doctors and more than 1,400 employees. The practice has its business offices in Golden Valley and Stillwater.