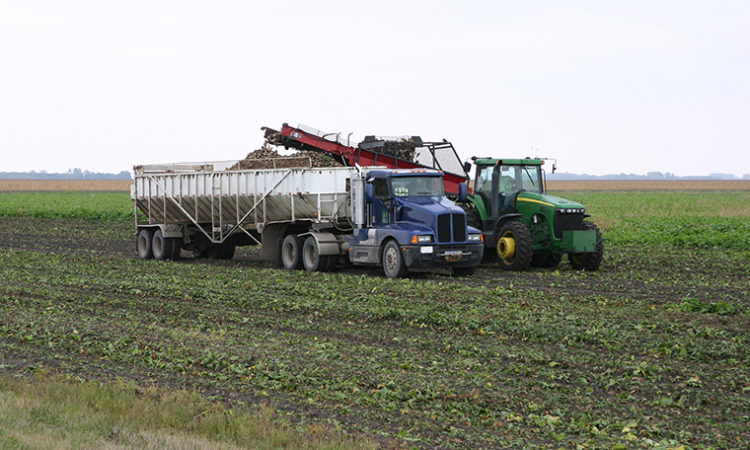 Sugar beets harvested and loaded into a truck in Minnesota (Shutterstock)

Mike Metzger has worked for the Minn-Dak Farmers Cooperative for nearly 20 years, and he’s never seen a sugar beet harvest quite as bad as 2019’s.

Each year, farmers in the Red River Valley along the Minnesota–North Dakota border typically harvest about 28 tons of sugar beets per acre. In the most recent harvest, however, they averaged about 22 tons per acre. For perspective, that means farmers lost about a third of their crop.

Sugar beet farming is big business in the Red River Valley, so a poor crop can be devastating for the local economy. A 2012 study said the sugar beet industry is responsible for nearly 19,000 jobs in the area, along with more than $1 billion in direct economic impact each year, according to North Dakota State University.

Heavier-than-average rainfall hit the region in fall, which delayed harvesting. Freezing temps followed soon after, forcing many farmers to leave crops in the ground.

“This was hands-down the worst year we’ve had,” says Metzger, vice president of agriculture and research for Minn-Dak.

“I would say 2019 was the most challenging harvest we’ve ever had at this co-op,” says Todd Geselius, SMBSC’s vice president of agriculture. He estimates that farmers in his co-op harvested about 23 tons per acre in 2019. That compares to an average of about 26 in a typical year.

Area businesses felt the squeeze quickly, Metzger says. “Farmers didn’t spend the money they would [have] in a normal year.”

There have been wider effects on the nation’s economy, too. In the U.S., about half of domestic sugar comes from beets. Thus, last year, the country imported more sugar than it has in nearly four decades.