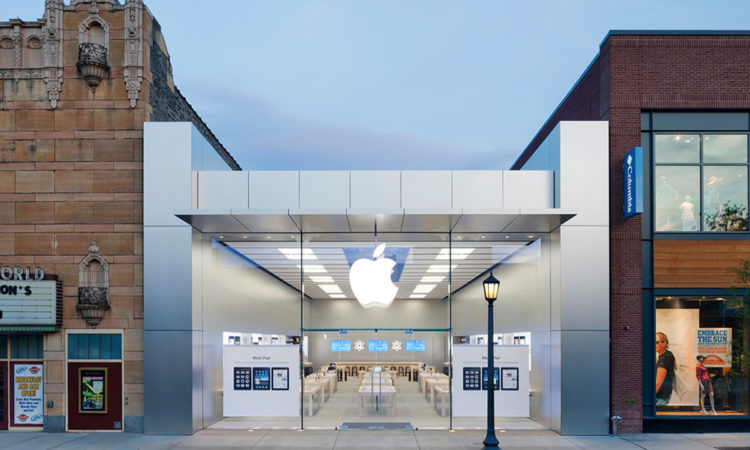 Apple is the latest national retailer to pull out of the beleaguered neighborhood. Leasing pros say it will take more than a rebranding of Calhoun Square to fix Uptown.
By Burl Gilyard & Allison Kaplan
October 22, 2020

When Apple gives up on Uptown, you know it’s grim. Typically a magnet in any location, Apple said Thursday that it will permanently close its Hennepin Avenue store. Apple’s four other Twin Cities stores reopened over the summer following Covid-19 closures, but the Uptown store did not.

A decade ago, Apple taking the place of the storied Uptown Bar symbolized a new era of mainstream consumerism for the neighborhood that long prided itself on its indie culture. Apple gave its Uptown store employees notice yesterday that the store closure would be permanent, the latest blow to a retail niche market in south Minneapolis that’s growing increasingly empty. Apple still has stores in Southdale, Ridgedale, Rosedale Center and the Mall of America.

Other national brands that have left Uptown in recent years include Victoria’s Secret, North Face, Columbia Sportswear, and MAC cosmetics. TCB reported in December that Urban Outfitters’ Uptown store, which is still open, is for lease.

One veteran commercial retail space broker said that there’s little question that the market is in tough shape.

“I think the coffin’s been laid bare there…now the bottom of the coffin fell out, I guess,” said John Johannson, managing director of retail services for the Minneapolis office of Houston-based Transwestern, of the state of the Uptown retail market after the departure of Apple.

Johannson says much of the blame rests at Minneapolis City Hall.

“It’s a huge part of it… You got social unrest, you got huge taxes, you got lack of parking, you got a city council that is anti-business, that thinks they don’t need parking in their city. They take parking off the street,” said Johannson. “And now they’re going to say, ‘How come retail’s leaving us?’ Gimme a break.”

Numerous Uptown retailers were frustrated by the city’s reconstruction of Hennepin Avenue, which eliminated street parking on Hennepin between Lake Street and 31st Street. The street was closed for a significant stretch in 2018 and shutdown for another month to complete the project in 2019. Many retailers said that the project hurt sales during construction.

“I think the coffin’s been laid bare there…now the bottom of the coffin fell out, I guess,” — John Johannson, managing director of retail services for Transwestern’s Minneapolis office.

On paper, Johannson said, Uptown should be a great retail market.

“Look at the demographics near there. Retail-wise, it’s fabulous,” said Johannson. “You got density, you got income, you got some daytime employment. You’ve kind of got everything and it’s a disaster. It’s a complete disaster.”

Jamie Liestman, manager of the John Fluevog shoe store in uptown, said the loss of the Uptown Apple store is “such a bummer” for the area. A spate of crime — including a June shooting that left 11 people wounded — hasn’t helped.

“There’s a very real perception and reality that Uptown isn’t a safe place to go shopping, and it hurts,” Liestman said.

But for now, the British Columbia-based shoe chain has no plans to leave Uptown: John Fluevog has a lease at 2900 Hennepin Ave. through 2022, Liestman noted. If anything, she’s hopeful that the rebranding of the Calhoun Square mall will “inject some life into the area again.”

“I know that property has changed hands quite a bit over the last 10 years,” she said of the Uptown mall. “No one seems to have found the right recipe for it.”

Still, Liestman’s neighbors have been disappearing left and right. On Thursday, women’s boutique Local Motion also announced plans to close. Liestman said that, too, will likely hurt her business. “That’s one of our most complimentary retailers … We sent customers to one another,” she said.

Twin Cities Business recently reported that Minneapolis-based Fueled Collective will not be reopening its Uptown co-working space, which suffered severe damage during the social unrest of late May. One factor was feedback from members who did not feel personally safe in Uptown.

And earlier this week, Alchemy 365 closed its Uptown location. Co-founder Molly Hanten said, “It has seen by far our greatest decrease in visits, memberships, and revenue since reopening, and more so since the riots in Uptown began.”

A turnaround could hinge, in large part, on the Lake and Hennepin shopping center long known as Calhoun Square, which new owners, Chicago-based Northpond Partners, announced this week they will rename Seven Points. They have their work cut out for them: the urban mall, which was struggling to hang on to tenants long before the pandemic, is reportedly down to 65 percent occupancy and in need of a revamp.

Northpond Partners acquired the property for $34.5 million last fall – half the price that the previous owner paid. Northpond is now the fourth owner of the building since 2004 that has pledged to update and reinvigorate the mall. The fate of the mall has been its own long-running soap opera in Uptown.

But Northpond had only owned Calhoun Square for a few months when the Covid-19 pandemic hit, striking a tough blow to retail properties everywhere. A representative of Northpond could not be reached for comment on Thursday afternoon.

On Thursday, the mall’s website promised “A New Dawn For Uptown” and indicated that a new site was coming soon.

The most positive buzz for Uptown right now is thanks to James Beard award-winning chef and restaurateur Ann Kim, who took over the former Lucia’s spot to open a new concept called Sooki & Mimi. Delayed by the pandemic, the restaurant is now expected to open this fall. Kim has been documenting its progress on her Instagram account. Earlier this week, she posted a photo of the restaurant exterior, outfitted with new floor-to-ceiling windows, with the caption “Soon my friends…soon.”

When reached for comment, Uptown Association Executive Director Jill Osiecki also sounded a positive note, though she conceded that Apple leaving is “tragic” for the area.

“Unfortunately, we see the trend with a lot of those very large retail spaces being really difficult to fill,” she said.

But Osiecki also pointed to Kim’s new restaurant, along with recent opening of the Daymark Uptown apartment complex, which she said is already 30 percent filled. “We do have an influx of people moving in,” she said. “There could be a benefit there.”