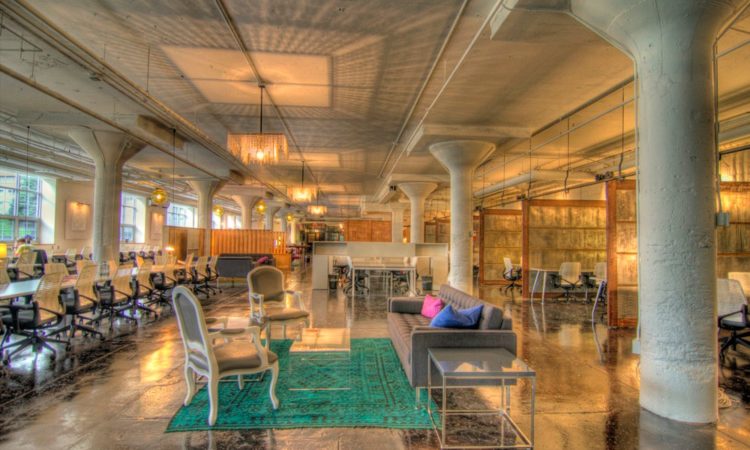 Co-working space had been under looted CVS store.
By Burl Gilyard
October 09, 2020

Many local businesses were burned and looted during the social unrest following the killing of George Floyd in late May. But one operator was flooded out of business.

The Uptown co-working location of Minneapolis-based Fueled Collective was destroyed and won’t be reopening. The 15,000-square-foot space was located under a CVS pharmacy at 1010 West Lake Street in south Minneapolis.

“The CVS was completely looted and the sprinkler line was broken and then all of that water mixed in with sewage, pharmaceuticals and other chemicals basically poured down on our space for about a 12-hour period of time,” said Kyle Coolbroth, CEO and co-founder of Fueled Collective.

In the wake of the damage the location shut down. Coolbroth said that it won’t reopen and, at least for now, they are not looking for alternative space in Uptown. Coolbroth cited three reasons for that decision.

“One of the main reasons is it’s hard to find 15,000 square feet of contiguous space in Uptown…The second piece is obviously Covid. Now is just not a great time to be taking on an additional lease,” said Coolbroth. “And the last one is we had a lot of members and heard from numerous people just concerned about safety in the Uptown area. So you put all those pieces together and at this moment in time we won’t open a new location down there. Sometime in the future we may consider it again.”

Until now Fueled Collective’s leaders had not made any big announcements or public statements about the damage and closure of its Uptown space.

“I just didn’t feel it was the right time to shine the light on us,” said Coolbroth, recalling the immediate aftermath of the riots. “We as a city were hurting bad.”

Coolbroth and Don Ball originally founded CoCo with a location in Lowertown St. Paul in 2010. The pair are the godfathers of co-working in the Twin Cities; they were the first to open a shared workspace in the metro. They rebranded as Fueled Collective in 2018 with a plan to build a national franchise model.

Earlier this year, Fueled Collective had four Twin Cities locations but now it’s down to two. The lease for its St. Paul space expired at the end of June. Coolbroth said that they are scouting for a new St. Paul location but have not settled on anything yet. Its locations in downtown and Northeast Minneapolis remain in operation.

Before the rioting and looting, Coolbroth said that most of their Uptown members had already taken equipment home due to the Covid-19 pandemic. Fueled Collective’s own equipment including its network, printers, and furniture were all heavily damaged. Because they weren’t seeking to replace the equipment, Coolbroth said that they only got about half the value of the damaged property in their insurance claim. Fueled Collective came to an agreement with its Uptown landlord to end its lease.

Like many other small businesses, Fueled Collective applied for and received funds from the federal Paycheck Protection Program.

“That helped us through the early days of the pandemic,” said Coolbroth.

But despite a Covid-induced lull in business, Coolbroth is bullish about the future of co-working as a key component in the future of work.

“We’re seeing a lot of new members show up,” said Coolbroth. “Probably the biggest trend that I’m hearing is people who have a lease coming up for renewal and they’re not going to renew it. They’re looking for an alternative. They’re looking for ways to reduce their risk, increase their flexibility and many of them are saying, ‘We think this is the way we’re going to operate our company in the future’.”

Fueled Collective is even considering potential new locations in the metro.

“We’re definitely looking at deals. We’re cautiously optimistic I would say,” said Coolbroth. “We’re looking at adapting our model and the way we would organize our spaces. It presents different opportunities. Fueled Collective is alive and kicking and we’re going to make it through.”