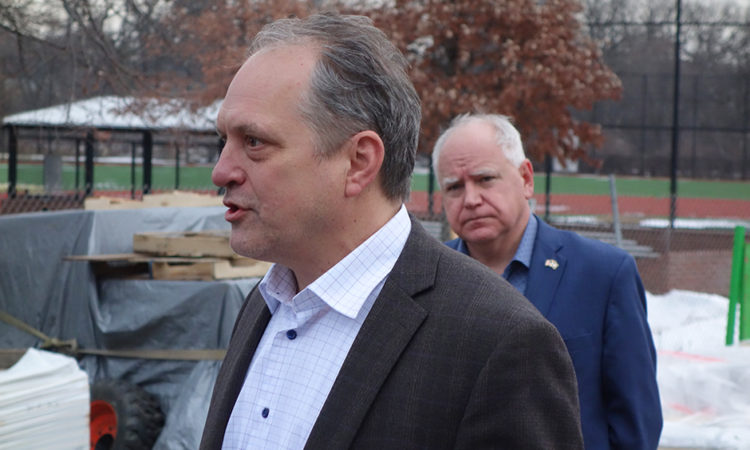 How much bigger? According to Minnesota Management and Budget, the surplus started off at $8.98 billion before some of the money was spent thanks to a series of financial triggers set off when the state brings in excess revenue.
By Peter Callaghan
December 23, 2021

It’s a lot, but it could have been more.

State budget writers, policymakers and frankly anyone or any group with a need for something out of Minnesota’s next state budget are still gushing over the record $7.75 billion state budget surplus reported earlier this month.

The state spends about $2.16 billion a month, and while surpluses have been common over the last two budget cycles, they usually hover in the $1 billion to $1.6 billion range, an amount that tends to set off political fighting between those who want to spend the money on government programs and those who want to give it back to taxpayers. The state’s current surplus is enough that lawmakers could do a bit of both — if they can agree how in an election year.

But according to Minnesota Management and Budget Commissioner Jim Schowalter, the surplus started off even bigger — that some of that amount was automatically spent via a set of triggers set off under law when the state has excess money.

Before governors and legislators get their hands on any state budget surplus, certain measures in law require state government to automatically spend cash balances. Some of those are long-standing, some are more recent.

These “fiscal management triggers,” as Schowalter calls them, are designed to make certain appropriations — payments that didn’t get into the regular state budget but can be made if the state has extra money laying around. “Minnesota has used these triggers for decades,” Schowalter said in releasing the economic and revenue forecast on Dec. 7. “They have served us well.”

The state budget adopted in early summer lists several such appropriations for which the larger balance was tapped. The first is what the state calls its budget reserve (but everyone else calls a rainy day fund). After draining the account during the 2008 Great Recession, Minnesota has since used budget surpluses to refill it. This year, the surplus was so large that MMB could refill the account after it was used (on paper at least) to balance the budget in 2019 — and add to it based on a funding formula. All together, the replenishment and top-off took $870 million from the state’s overall $8.98 billion surplus, and the budget reserve fund now has a balance of $2.656 billion.

Minnesota had a record rainy day fund when the pandemic began and was given high marks for fiscal management by outside groups. And while the state did not tap into the fund during the COVID recession, having it available gave the state time to wait out the impacts.

“Just a little more than a year ago many thought the fund would be eaten up by COVID,” Schowalter said. “It helped us adjust to the surprises of the last year. Instead of making drastic cuts, we had time to plan and gather information.”

The second large deduction from the $8.98 billion was to cancel out a budget gimmick used for decades in Minnesota. Called the “accelerated June sales tax shift,” it was used to slide some tax collections that would normally be paid in July into June. Since that time is also the transition between state fiscal years, the shift had the effect of grabbing some money from the next biennial budget to balance the current one.

“The accelerated June payment is a revenue shift first used in the 1980s to help solve a state budget shortfall and is one of the few state revenue shifts that remain,” notes a 2019 analysis done by the Minnesota House of Representatives fiscal staff.

The size of the recent surplus allowed the state to finally remove the shift from state law, at a price tag of $359 million.

A third, smaller expenditure was $4 million to transfer money back into the Minnesota 21st Century Fund. The fund makes loans for “innovative mineral, steel, or other industry processing, production, manufacturing, or technology projects located in the taconite relief tax area.” A total of $20 million was borrowed from the fund a year ago to help pay for emergency business loans during the pandemic.

According to MMB, $15 million has now been repaid, and if the state still has a surplus in February 2022, another repayment will be made to the fund. For there not to be a payment, the state’s entire $7.75 billion surplus reported this month would have to disappear.

A final trigger in state law did not result in a payment from the surplus. Had school district aid been below what state law requires, the difference would have been made up with money from the surplus this month. According to MMB, the last shift of money from school aid funds was repaid in October 2013, when the state ended that fiscal year with a $636 million general fund balance.