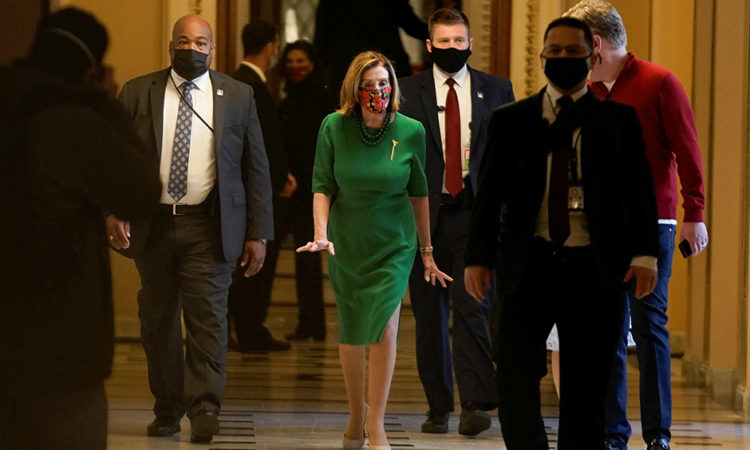 Speaker of the House Nancy Pelosi walking back to her office on Monday after opening the House floor following an agreement of a coronavirus disease aid package the night before. REUTERS/Ken Cedeno

What the New Federal Covid Relief Bill Means for Minnesota

Among other things, the bill will provide the state with a share of $25 billion for rental assistance. Missing, however, is any direct aid to state and city governments.
By Peter Callaghan
December 22, 2020

The $900 billion federal Covid relief package passed by Congress Monday night has lots to like for state governments. Two pieces in the proposed law in particular resolve spending issues debated before and during last week’s special session of the Minnesota Legislature.

By extending federal unemployment insurance benefits by 11 weeks for about 120,000 Minnesotans, the bill will negate the need for Minnesota to provide those benefits and cancel a plan to borrow up to $200 million from the federal treasury (thought the state plan was to add 13 weeks, not 11). That borrowing might have forced a future repayment by the state and the employers who pay into the state’s unemployment trust fund. The unemployment insurance provisions in the new bill will also add $300 per week on top of current state benefits through March 14.

The bill also distributes $25 billion to the states for rental assistance. How the money is divided among states and what the rules are isn’t yet clear. But on a per capita basis, Minnesota could see $375 million. That compares to the $100 million that was drawn from the state’s share of the original CARES Act for rental and mortgage assistance. That money was spent between August and December.

DFLers in the Legislature wanted to use state funds to extend the rental assistance program into 2021, but Republicans did not endorse the plan and it was not in the bill passed a week ago during the most recent special session.

While many states and local governments used federal money for rental assistance, this will be the first federal program to pay housing costs for those impacted by the pandemic.

Minnesota Housing Finance Agency Commissioner Jennifer Ho said last week that she was hopeful that assistance would remain in the federal relief bill. The dollar amount being talked about “would be extraordinary,” she said.

“We stood up our program in August effective back to March and it has been subscribed now at $100 million,” Ho said. “That would give us a safety net for renters going into 2021.”

Ho said she expected some of the money would go directly to local governments, and she isn’t sure if the rules that come with the money would allow the state to distribute it the same way it does now under the current program. Under that system, applicants requested money from local agencies and nonprofits. The processed claims were then sent to the state for approval, with the money then being sent directly to landlords and banks.

That plan, however, had been left to Ho to design after the Legislature failed to agree on a program. It was created by executive order of Gov. Tim Walz and funded from the state’s $1.87 billion share of the first CARES Act, passed by Congress in the spring.

“We have been hoping for a federal stimulus that includes emergency housing assistance and we certainly are closer than we have been for quite a few months,” Ho said.

Rep. Michael Howard, DFL-Richfield, was one of the earliest advocates for housing assistance. He said Monday that the inclusion is good news, though there are questions about the details.

“The legislature will have an important role to ensure we aren’t letting folks fall through the cracks. For example, it appears that this relief will only cover renters and not folks who need assistance to pay home mortgages,” Howard said. And the state plan covered utilities and homeowners association fees, something Howard said he isn’t sure will be covered in federal plans.

“Lastly, there may be some income requirements where this relief must be targeted, which differs from how the original $100 million in CARES Act housing assistance was targeted,” Howard said.

Other provisions in the compromise will send $600 per person to individuals making up to $75,000 a year and couples making up to $150,000 a year. It also will extend other unemployment provisions of the springtime CARES Act, such as benefits for gig workers and people who work on contract.

Public schools will share $54 billion, colleges $23 billion and tribal schools $1 billion. The Paycheck Protection Program, which provided forgivable loans to employers who agreed to keep workers on the payroll, was extended with $284 billion.

Additional funds will also be spent to support food stamp programs, child care and help for farmers and ranchers. And movie theaters, live theaters, music venues and cultural centers could get some of a $15 billion pot of money. Transit agencies would share $14 billion.

Missing, however, is direct aid to states and cities. Democrats had sought $160 billion — more than the $150 billion in the CARES Act — but the provision fell out of the final bill due to GOP objections.