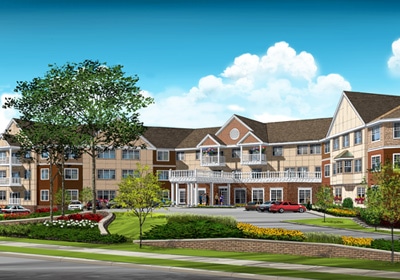 The development, located at 2996 Cleveland Avenue North, features 80 apartments. It offers a “continuum of independence options,” the company said, meaning that it caters to residents who seek independent living or assisted living, including care related to memory loss.

Ebenezer Management Services, a subsidiary of Minneapolis-based Fairview Health Services, will manage Cherrywood Pointe. The development offers a variety of services to residents, including meals and personalized care, as well as a library, theater, fitness room, and salon. Residents may also use golf carts to access nearby walking paths.

Mark Nelson, United Properties’ vice president of development and the lead project developer for Cherrywood Pointe, said in a Thursday e-mail that the company’s foray into assisted living is “a natural progression for United Properties, as the seniors we serve age.”

He declined to disclose the overall cost of the Cherrywood Pointe project or to estimate how the new business will impact revenue.

Nelson said that United Properties hopes to add additional Cherrywood Pointe developments, but “we do not have any definitive plans to share at this time.”

United Properties specializes in commercial real estate development and investment, but the Cherrywood Pointe development represents the latest move by the company to tap into the growing senior housing market.

“We’re excited to open our very first assisted-living community here in Roseville,” United Properties Executive Vice President Brian Carey said in a statement. “Cherrywood Pointe’s continuum of independence options makes it an ideal option for seniors who want to retain their independence and offers an easy transition if the need for more services arises.”

Meanwhile, United Properties is planning an expansion of Applewood Pointe of Roseville at Langton Lake, a “senior cooperative housing community” located adjacent to Cherrywood Pointe. The first phase opened in September 2011 and features 48 units. United Properties will begin work on the second phase, which will include 40 units, in November.

There are currently seven Applewood Pointe senior communities in the Twin Cities, which together house roughly 1,000 residents.