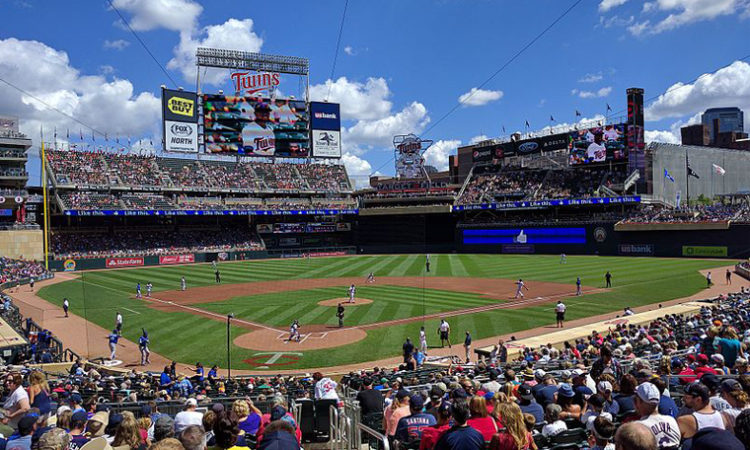 Fans could enter Target Field for as little as $3.72 per person each game for 79 home games this year under the cheapest Twins Pass plan.
By Amanda Ostuni
March 11, 2019

After drawing in fewer than 2 million fans last season—a 14-year low in attendance—to Target Field, the Minnesota Twins are taking a new approach this year to fill in seats around the diamond.

Under the new “Twins Pass” program, fans can gain entry to the Minneapolis ballpark for as cheap as $49 a month per person all season long, excluding Opening Day (March 28) and Joe Mauer Day (June 15). That’s 79 games altogether.

The $49 a month package, or $294 for the entire regular season, however, does not come with a seat—only “ballpark access.” To guarantee a seat, Twins fans will have to either double or triple the monthly bill.

Twins Pass tickets are managed from a mobile device using the MLB Ballpark app. And if fans want to be placed near friends or family who have a Twins Pass at the same subscription level, they can link tickets through the “Sit with Friends” function within the app.

While new, the Twins Pass is just one alternative option to enter Target Field outside of single game tickets or a standard season ticket packages. The team also offers a 20 ticket Flex Plan, weekend plans, as well as plans for ten, 20 and 40 games.

The Twins have been experimenting with creative ticket offerings for several years recently as a way to drive traffic to home games. One of the first offerings the team introduced was a ticket-exchange program for season-ticket holders. Then came the Flex Plan in 2016. For the 2017 season, the Twins launched the Spring Ballpark Pass, which granted access to home games limited to April and May, and limited to standing room-only space.

Mike Clough, senior vice president of ticket sales, told TCB a few months into the 2017 season that the Spring Ballpark Pass was a success, and that it had “assisted with attendance challenges we have in April and May, with school in session and uncertain weather.”

Ahead of the 2019 season, the Twins also announced more family-friendly concession prices at select locations, including ballpark favorite foods like hotdogs, nachos and pretzels for $4 or less, 12 ounce Budweiser and Bud Light beers for $5 and 16 ounce Pepsi products for $2. The team is also renovating the Gate 34 right field entrance to include a weather canopy and a pop-up marketplace area.