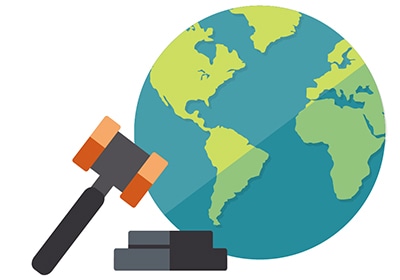 Small and midsize Minnesota companies are finding growth opportunities outside of the United States, but they need to take steps to avoid a world of hurt.
June 06, 2016

Internet connectivity is the gateway to going global for some Minnesota companies. A small company with a distinctive product or service can find the world knocking digitally on its door. In many cases, opening an overseas office or facility isn’t necessary, but other firms want to take that big step to get closer to a growing customer base, key suppliers or distributors.

Yet setting up an operation outside of the United States is fraught with legal pitfalls, so newcomers need to look before they leap—or tumble headlong.

Globalization and trade agreements are a major issue in the 2016 presidential race. While the regulations for a global economy may be dynamic, the global marketplace is here to stay. “Just about every company today is looking for growth outside the U.S. to drive its economic performance—opening new markets, finding new customers, expanding their geographic footprint,” notes Martin, whose firm also has offices in the United Kingdom and China and is a member of Lex Mundi, a global network of independent law firms operating in more than 100 countries.

The MTO doesn’t advise Minnesota companies looking at foreign expansion on legal matters. With that caveat, she adds that MTO staffers “are extremely aware of what companies can go through when they do want to expand overseas.” The biggest issue Motzenbecker sees on the legal side is ownership of the intellectual property of products.

Another complex issue is hiring people overseas. “Many law firms would not advise to [hire] employees because then you’re taking on more ownership of risk—insurance, retirement, worker’s comp and so on,” Motzenbecker says. For many companies, she says, working with contractors and consultants can be a “less onerous” way to get into international business.

There can be significant and complicated operating challenges because the foreign market “doesn’t have the infrastructure that the developed world has become accustomed to, to support business operations on a daily basis,” says Martin. He works with multinational companies in structuring mergers and acquisitions transactions, negotiating those deals, helping them identify areas of risk for compliance and addressing those risks.

Business ethics in many countries, particularly those not considered part of the developed world, are often very different in the foreign markets, Martin notes. “In particular, bribery and corruption are often deeply embedded within the system and the economy as a way to work around some of the inherent challenges of those markets,” he says. With some overseas businesspeople, greasing palms and offering little emoluments and “presents” are just how things are done.

Needless to say, a Minnesota business should not yield to temptation—and should set up systems so that its people on the ground don’t yield to it either. “It’s really critical that [U.S. firms] have their own infrastructure in terms of human talent and systems to support those businesses,” Martin says. He also recommends keeping a close eye on the finance and sales and marketing functions to ensure that daily business activities are being conducted in compliance with the law and the company’s own code of business ethics.

Martin advises that a company integrate its Minnesota IT platforms, finance and accounting functions and training programs with the overseas operations so employees on foreign soil are conducting themselves in a manner that’s consistent with headquarters staff.

Maintaining lines of contact between Minnesota and an overseas office or facility is crucial. A lot can get “lost in translation” when communicating messages across borders and cultures, Martin says. “So it’s important to take those extra steps to verify and confirm that instructions are being followed, whether that’s related to internal matters like finance and accounting or legal compliance, or operational matters like quality control,” he says.

One of the key steps that Martin recommends is investing in the time to build personal relationships between headquarters staff and employees in the overseas office. In addition to regular face-to-face meetings, which is the most effective way of communicating and supervising employees, he suggests deploying internal or external audit teams “to make sure things are operating the way they need to be in order to fulfill your obligations for legal compliance.”

While it certainly pays to follow these practices in developed markets such as Canada or Western Europe, they’re also crucial in emerging markets. “You have a very underdeveloped and untested legal system,” Martin says. “Oftentimes, the government bureaucracy is slow and inefficient, inconsistent, not transparent.”

But the U.S. rule of law on matters of compliance and ethics is pretty clear. Nathaniel Zylstra, an attorney with Minneapolis-based law firm Briol & Associates, notes that the Foreign Corrupt Practices Act, enacted in 1977 to govern business practices overseas, requires U.S. companies to have adequate accounting procedures and controls in place to prevent bribery from occurring.

“The Foreign Corrupt Practices Act basically says: You have to apply U.S. business standards in foreign operations,” Zylstra says. And that includes any employee overseas. This requires more than just policies and procedures. “It’s not only that you have to police your own behavior. You have to be actively policing the behavior of everybody under your control,” he adds.

“The U.S. doesn’t even have any bilateral treaties about enforcing court judgments overseas. In other words, almost wherever you are in the world, you may be able to get a U.S. court judgment if you have a dispute, but you might not be able to enforce it in just about any country. That’s a significant risk,” Zylstra says.

Because of the enforceability issues, using arbitration in international disputes is much more favorable than going to court, he says.

Zylstra recommends building a dispute resolution clause into any contract, whether it’s with a supplier, contractor or partner. Disputes could cover a range of topics: labor contracts, international suppliers, payments and intellectual property protection.

For smaller firms in particular, you want to have a trusted partner on the ground, the MTO’s Motzenbecker advises. “You want to establish the rules of the game—issues of intellectual property, hiring and the employee vs. contractor relationship and internet security.”

Around the world, she adds, the state of Minnesota is known for “good products, good people, good services.” She argues that can make it easier for Minnesota companies to open their doors in just about any part of the world—and pump up the volume of their sales.

“I would advise someone who wants to do business overseas to work with a consultant who is a national of the country,” Motzenbecker says. Partnering with someone fluent in the local language or dialect can help smaller Minnesota companies avoid problematic legal issues. “There are so many small cultural signs that could be hidden in translation,” she explains.

This isn’t the only advice the MTO can offer. The state government entity’s website (mn.gov/deed/business/exporting/) provides a directory of international business contacts, which includes law firms that advise on overseas commerce. Motzenbecker also recommends tapping honorary consuls living in Minnesota as sources of trade information for the countries they represent.

At the federal level, the U.S. Commercial Service, the trade promotion arm of the U.S. Department of Commerce’s International Trade Administration, offers Gold Key Matching Service. This initiative helps businesses connect with potential overseas customers for a fee. The MTO can help defray that cost via the State Trade Export Promotion (STEP) grant program, which accepts applications from Minnesota businesses that plan to export their products.

A Q&A on Minnesotans Doing Business in Cuba

Chris Bercaw, an attorney with the Minneapolis-based Dorsey law firm since 1995, has considerable experience in international mergers and acquisitions, overseas expansion and business formation. In light of the Obama administration’s efforts to establish a new relationship with Cuba, Twin Cities Business asked Bercaw some key questions about Minnesota companies doing business in Cuba.

TCB: You visited Cuba in December and have been talking with Minnesota-based companies about doing business in Cuba. What level of interest are you seeing from Minnesota companies and what industry sectors are particularly interested in expanding to Cuba?

Bercaw: I have spoken with a number of Minnesota-based food and agricultural businesses that are eager to export commodities or processed food to Cuba. Cuba is heavily dependent on food imports. Although the U.S. would have a huge price advantage over other food exporting countries, Cuba buys much more food from the European Union and South America due to the U.S. embargo.

The Obama administration has made it easier to export food to Cuba, but the embargo laws prohibit food exporters from selling food to Cuba on credit and block virtually all food imports from Cuba to the United States. Food exporters like Cargill have been strong proponents of rolling back the embargo, as have Sen. Amy Klobuchar and U.S. Rep. Tom Emmer.

We are also hearing from hospitality and travel-related businesses that are interested in Cuba’s travel industry. The Obama administration’s relaxation of travel restrictions has already resulted in a big increase in U.S. travel to Cuba. Sun Country Airlines is bidding for non-stop flights to Havana, and international hotel chains are negotiating agreements to manage government-owned hotels in Cuba.

The loosening of the embargo rules on financial services, telecommunication and internet-based services infrastructure, news media, educational scholarships and humanitarian projects is drawing interest in those areas from Minnesota and elsewhere.

TCB: From a legal standpoint, what are some of the considerations that companies should keep in mind about doing business in Cuba?

Bercaw: First, the U.S. embargo will severely limit opportunities to do business in Cuba until Congress changes the law. Companies should thoroughly investigate the U.S. sanctions applicable to their plans.

Second, Cuba is not a market economy. Its socialist government controls most of Cuba’s economy through state-owned enterprises and a large bureaucracy. Cuba is particularly vigilant regarding commerce with foreign companies. U.S. companies investing in Cuba must be prepared for a long haul. Those who build relationships with the Cuban government and can demonstrate how their plans will benefit Cuba are most likely to succeed.

Third, Cuba is not a wealthy country. Wages are very low by international standards and only a small segment of the population can afford imported products. This is changing, but will take time.

TCB: What do you think are the toughest legal barriers to overcome, and how would a Minnesota-based company resolve any disputes that arose from doing business in Cuba?

Bercaw: Cuba’s command economy and government bureaucracy create significant barriers to entering markets and establishing operations. Cuba does not have an independent judiciary by our standards. The Cuban government can easily stop businesses they don’t like. Fortunately, corruption does not appear to be a big factor in doing business in Cuba. Instead, the challenge is to persuade government officials that your business will help advance Cuban interests.