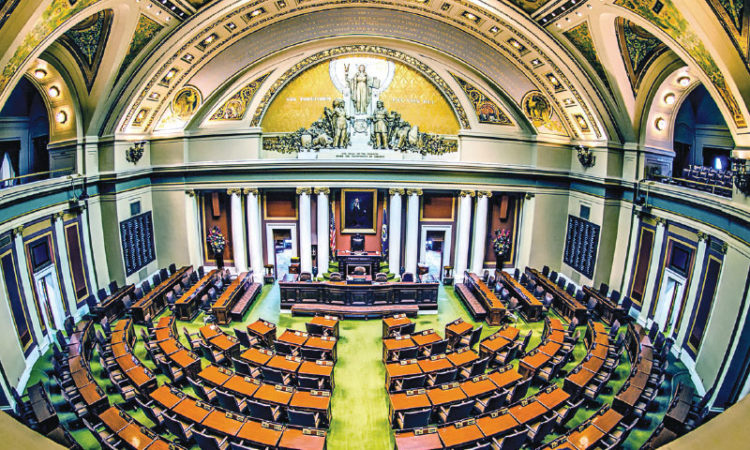 How do you lobby a legislature that meets online?
By Liz Fedor
February 23, 2021

What do lobbyists do when they’re shut out of the Minnesota State Capitol during the legislative session?

Kevin Goodno is dealing with that challenge. He leads a team of eight lobbyists employed by the Minneapolis-based Fredrikson & Byron law firm. When the legislative session opened in January, the House was operating virtually, while the Senate opted for a hybrid model.

“Being at the Capitol regularly allows you to pick up information that you normally wouldn’t pick up if you were just monitoring things remotely,” says Goodno, a former legislator and commissioner in the Pawlenty administration.

In the pre-Covid days, if he needed to talk to four lawmakers, Goodno says, “I could just stand outside the House chambers and connect with maybe three out of four pretty easily as they are going into a floor session or coming out.” While waiting, he also might hear useful information about other bills by simply running into legislators and other lobbyists.

That informal conversation is no longer a regular part of the daily rhythm of the legislature. And 2021 is a challenging session because lawmakers are dealing with a projected budget deficit and Covid-19 measures.

In the virtual environment, Goodno says, “legislators, for the most part, have been pretty responsive.” Fredrikson’s lobbyists are known quantities: Tara Mack was a Republican House member; former senator Jeff Hayden became a Fredrikson lobbyist after losing his seat last year; and Shep Harris is mayor of Golden Valley.

“You need to be a people person to do this job,” Goodno says, but the days of close conversations in Capitol corridors are temporarily on hold.

Can Neighborhood Newspapers Survive?
Business as Usual?
Cargill CEO David MacLennan on Politics and Pandemic
The Gretzky Maneuver
See all stories by this author >