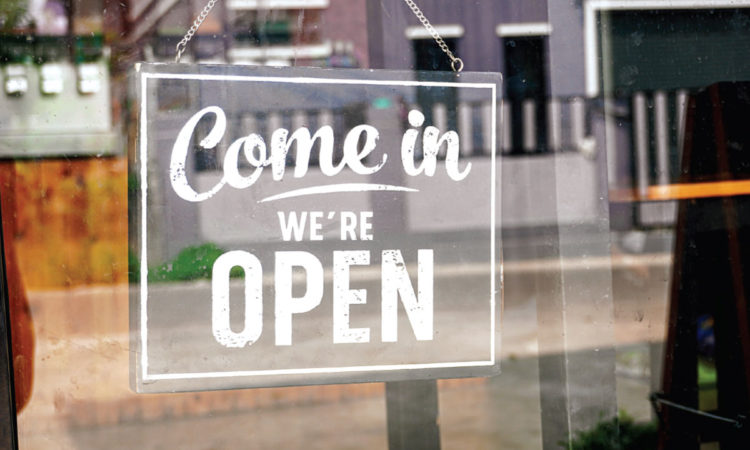 While some degrees of uncertainty remain in 2021, there are several solid signs of stability that affect the economy. The presidential election is over, vaccines for Covid-19 are being distributed nationally, and another $900 billion is being injected into the economy from a major federal stimulus package passed late in 2020.

There’s a general consensus that life—and business—will get closer to normal at some point in 2021. The second wave of stimulus programs provides $284 billion in Paycheck Protection Program (PPP) loans to small businesses. Under the new program, businesses that meet certain criteria could take out a second PPP loan. It also will allow PPP funds to be used for a wider range of business expenses.

Moving past the election takes “a big hurdle out of the way,” says Jon Dolphin, president of Minneapolis-based 21st Century Bank. “I also see that people, I think, have been waiting for what this second stimulus package looks like to make their decisions as far as what their future moves will be.” The U.S. Small Business Administration (SBA) opened the latest PPP round in mid-January.

Dolphin says that once some of these uncertainties become more certain, it will start to show us what the true market will be.

The pandemic forced many businesses to put lots of big decisions on hold, and that remains the case in early 2021.

“I think we’ll know more in 60 to 90 days—as I probably said six months ago,” says Dolphin with a wry laugh. “It’s tough to look out too far.”

While 21st Century Bank made about 700 PPP loans for approximately $76 million in 2020, its traditional commercial loan business was down for the year.

“We were at 85 percent of the origination levels that we were at the previous year,” says Dolphin, the rough equivalent of losing two-and-a-half months’ worth of business.

But based on the latest federal stimulus package, Dolphin is encouraged. “There are some good items in there that can potentially push some businesses to make certain decisions.”

Beyond the apocalyptic pandemic-year headlines, business was not an across-the-board disaster. “We actually had, outside of PPP, a record SBA production year,” says Bryan Toft, chief sales officer with St. Paul-based Sunrise Banks. On the consumer side, Sunrise also had a record year for mortgage loans in a climate of historically low interest rates.

“On the business side I would say we grew about 6 percent when you take out PPP,” Toft says of Sunrise’s commercial loan portfolio. That’s partly explained by Sunrise ramping up its communications with customers in the wake of the pandemic.

“We had a renewed focus on our existing customers. Part of our process here was just to make sure that they’re OK,” Toft says. In some cases, those conversations led to talk of what’s next for a business, which translated into the company taking out a new loan to help fund an expansion or other project.

During 2020, bankers quickly saw that the pandemic was not hitting all small business customers equally. While some battled steep drops in sales, others saw more business specifically because the life of lockdowns and quarantines was changing business.

“Technology-related companies have experienced increases in business as people have gone remote and need additional technology across the board,” Toft says.

Beyond adding another round of PPP loans, the stimulus package approved in December also includes provisions to make standard SBA loans even more inviting. For some loans, the SBA will guarantee a larger percentage of the loan.

Covid Conundrum: Do We Need More Hospital Beds?
Good Grocer Puts the Soul Back in Supermarket
Gaming the System
Verified: Knowledge Is Power

“I think these guarantee increases will encourage banks to lend more,” Toft says.

The newest round of PPP loans came with some changes. Businesses can get a second loan if they meet certain criteria: The company must have fewer than 300 employees and have experienced a revenue reduction of at least 25 percent in one quarter of 2020.

Hotels and restaurants, both hit particularly hard during the pandemic, are eligible for larger loans. Businesses can use new PPP money to cover a wider range of expenses.

Publicly traded companies are not eligible for the latest round of PPP loans.

If there’s one thing that most people aren’t worried about, it’s interest rates. In mid-December, the Federal Reserve again left interest rates unchanged at the near-zero rates where they’ve been since March 2020. The historically low rates are serving as one tool to help boost the financial conditions of businesses and households riding out the pandemic.

“Some of our customers are actually doing pretty well; obviously, restaurants and bars are struggling,” says Tom Beck, president and CEO of Minneapolis-based Northeast Bank. “They’re hanging on and they might need another round of direct stimulus, PPP, whatever it might be.”

As with other bankers, Beck says that pandemic business performance varies greatly. “It still breaks down by industry segment,” Beck says. “The housing market’s going gangbusters. And all of those ancillary businesses [are] doing well also.”

Beck is encouraged by signs of stability but acknowledges that no one knows exactly what 2021 will mean for the economy.

“We are, I think like a lot of people, kind of holding our breath a little,” Beck says. “I do think it feels like there’s a dedication in Washington where they do want to get things done, they want to work together, and I think that will be cause for optimism, I’m hoping. But a lot of things we just don’t know.”

One veteran banker notes that the pandemic has lasted long enough to get a better sense of which businesses can survive the crisis.

“Clearly, we have a better understanding of which businesses were negatively impacted,” says Troy Rosenbrook, president of Highland Bank. “We’ve seen which ones have been able to more easily modify their business model to adapt.”

“We see the [credit] line usage for businesses being less than it would have been typically. I think a number of businesses have postponed any kind of big capital expenditures,” Rosenbrook says. “Where we did see [recent] activity was in the [mergers and acquisitions] space.”

Rosenbrook maintains that’s the case because both business buyers and sellers have gotten more comfortable about values and valuations than they were last spring.

But in the big picture, commercial lending is down.

“If you look across the industry, banks are way down in loans outstanding,” Rosenbrook says. “It’s not a supply issue. Banks have tons of liquidity to lend out.”

That’s due to a range of factors—businesses reining in capital expenditures, companies choosing not to tap into their credit lines, and mergers and acquisitions on hold in the early months of the pandemic.

The local banking landscape is always shifting with ongoing mergers and consolidation, as well as the periodic entrance of new players. In December, news broke that TCF Bank, a long-standing presence in Twin Cities financial circles, was being acquired by Columbus, Ohio-based Huntington Bancshares Inc. TCF’s headquarters already had moved to Detroit in a previous deal. Because of the recent transaction, the TCF name will eventually disappear.

Huntington touts itself as the top SBA lender in its region and will look to flex that muscle in new markets. What does that mean for local SBA lenders?

“Any time there’s a change in the market it tends to create both opportunities and challenges,” Rosenbrook says. “I have to deliver my service in a way that’s competitive.”

The arrival of Covid-19 vaccines is a bright spot, but that development’s short-term effect on businesses remains to be seen. “Clearly it’s a positive,” Rosenbrook says. “Maybe the speed with which it impacts the economy is as yet a little unknown.”

And the federal government will continue to play a big role.

“This new stimulus plan is important,” Rosenbrook says. “The more targeted and the more directed it can be, I think the more successful it can be.”

Community banks may not be a big deal on Wall Street, but they’re vitally important to the economy of Main Street. A new report from the Federal Deposit Insurance Corp. noted that community banks have lending strength in the categories of commercial real estate (CRE), small business, and agriculture loans.

The FDIC Community Banking Study published in December underscored the importance of community banks in those sectors. Per the report:

The Big Picture for Banking

While the pandemic has brought economic consequences for banks, they are not as severe as those felt during the Great Recession.

The 2021 banking and capital markets outlook report from London-based Deloitte takes a global look at the industry and notes that the “drastic contraction in the global economy has already meaningfully diminished loan growth and payment transaction volumes.”

Another factor that complicates life for bankers is growing provisions for loan losses for deals that don’t work out or fall apart in the wake of the pandemic.

Per the report, “The Deloitte Center for Financial Services estimates that the U.S. banking industry may have to provision for a total of $318 billion in net loan losses from 2020 to 2022, representing 3.2 percent of loans. While losses can be expected in every loan category, they may be most acute within credit cards, commercial real estate, and small business loans.”

Small business owners had to learn a new acronym in 2020: PPP. The new Paycheck Protection Program was created under the CARES Act, the first federal relief effort to address economic challenges of Covid-19.

The Minnesota District of the SBA administered approximately $11.3 billion in PPP loans to 102,340 businesses. While some larger businesses landed loans in the millions, the average PPP loan in Minnesota was about $110,000. Nationally there were more than 5.2 million PPP loans totaling more than $525 billion. The loans had an interest rate of just 1 percent but could be forgiven if the businesses met certain conditions.

To put that in perspective, the PPP loans issued in Minnesota amounted to nearly 15 times the amount of traditional SBA-backed loans in the state for federal fiscal year 2020, which ended Sept. 30. Traditional SBA loans in Minnesota totaled $768.1 million.

This story appears in the Feb./March 2021 issue with the title “The Long Road to Stability.”