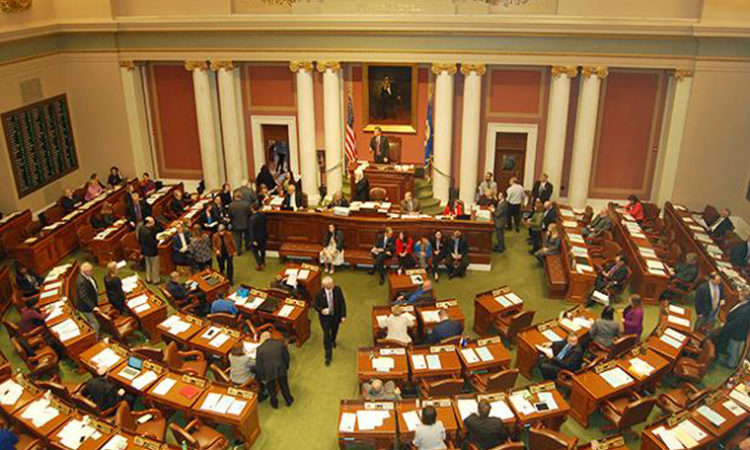 Under the Minnesota Constitution and past practices, the state Legislatureâwhich in reality means the party in the majorityâgets to decide where the lines are drawn. ( Photo by Corey Anderson/MinnPost)

Apparently, there’s no time like the present to start thinking, and fighting, about the process.
By Peter Callaghan
May 10, 2018

Is there a chance that a legislative debate over the highly partisan practice of drawing electoral district boundaries could be done in a nonpartisan manner?

In the current makeup of the Minnesota House of Representatives?

Proof of that came last week, deep into a lengthy debate over a mega-omnibus bill that included dozens (and dozens) of disparate provisions from four other omnibus bills, which in and of themselves are grab-bag bills filled with myriad different provisions.

How disparate? That single mega-bill contained language to include a tip credit in Minnesota’s minimum wage and block new nitrogen fertilizer standards.

Amid all that was language from still another bill — one that would codify in state law the principles that should be used the next time the state redraws the districts that determine political representation in the state.

The principles are pretty much what you would expect, given that the U.S. Constitution and U.S. Supreme Court have set down rules for interpreting the provisions on redistricting: equal population; contiguous and compact districts; no attempts to either congregate or divide minority groups; and keeping cities and towns and communities of interest together.

The next U.S. Census, which kicks off the process, is two years away, and the subsequent redrawing of congressional and legislative district lines won’t even begin until 2021. But there’s no time like the present to start thinking about the process.

Under the Minnesota Constitution and past practices, the state Legislature — which in reality means the party in the majority — gets to decide where the lines are drawn. If there is partisan advantage to be taken, the majority party will take it. When power is divided, as it was over the last two census cycles, the court has had to step in and play mapmaker.

According to the measure’s sponsor, putting the principles in statute would help guide the Legislature and the court if necessary.

But Democrats in the House took the opportunity to offer their own amendment. Rather than set up principles for the next batch of elected legislators to use when crafting new political lines, why not take it out of their hands completely? Seventeen states have some sort of commission that redraws district lines. Maybe Minnesota should become one of them?

'Elected officials should not be picking their voters'

It might be unfair to divide positions on that question by whether the lawmaker is in the majority or the minority. There are partisans of both sides who think elected legislators shouldn’t be drawing lines that can mean political life or death and party control. There are others — mostly Republicans these days — who think commissions are something of a ruse, partisanship disguised as nonpartisanship.

But it is certainly easier to be in favor of sharing power over something as significant as district-drawing when you currently lack any power at all. So it maybe wasn’t a surprise that all the speeches and all of the votes for a commission came from DFL members of the House, and that all of those opposed from Republicans.

“Elected officials should not be picking their voters,” said Rep. Jennifer Schultz, DFL-Duluth, who sponsored the Democrats' amendment. “The voters — the people of Minnesota — should be selecting their elected officials.”

Schultz’s amendment would have the Legislature turn the map-drawing over to a commission containing five retired judges and four citizens. The judges could not be former elected officials or party officials, and they would have to agree on a fifth judge. The four citizens would be chosen from applicants.

While Schultz tried to sell her plan as a good government, she also ventured into some recent political history that is painful for Democrats. National Republicans launched a strategy to win as many state legislative races across the country as possible prior to the 2010 Census. Some 700 seats changed hands across the nation and 20 different legislative bodies moved from Democratic to Republican control. One result was to give Republicans power over the drawing of legislative — and, importantly — congressional districts. In the subsequent election, in 2012, the GOP gained nearly three dozen congressional seats.

The U.S. Supreme Court has two cases pending that challenge such political redistricting. For now, however, it is legal, and has a history that is centuries old. “This is not a fair process,” Schultz said. “Gerrymandering is putting our democracy at risk.”

Rep. Tina Liebling, a DFLer from Rochester, said she thinks the constitution would allow the Legislature to delegate its power to a commission to redraw lines. And she objected to language that said additional data could be used to help guide the drawing of the state's political map. That, Liebling said, could include block-by-block voting data that could be used to create districts tailor-made for the majority party. “It could include who the incumbent is, where they live, what the voting history of those people have been,” Liebling said.

In fact, such data is commonly used during partisan redistricting. And even in states with commissions that have an equal number of Republicans and Democrats, such data is used to allow both parties to protect incumbents, leaving them to battle over open seats and new congressional districts.

In response to the DFL amendment, Rep. Sarah Anderson, R-Plymouth, proposed an amendment to Schultz’s amendment that would have created a commission with 10 legislators from the majority caucuses — five each — and four legislators from the minority caucuses: two each. Under the current makeup of the Legislature, that would mean the 14-member body would be made up of 10 Republicans and four Democrats.

Anderson said her amendment was a sincere attempt to create a commission, but with legislators in control. But Democrats saw it as a poison pill that would prompt them to withdraw their amendment.

And that’s what happened, but not before the House debated the pros and cons of commissions and questioned each other’s true motives for wanting what they wanted.

And commissions have had some of their own problems. Republicans in California have accused Democrats of manipulating the voter-initiative-imposed commission process there, despite the equal representation of Democrats and Republicans and so-called “decline to state” voters on the panel. The state legislature there has been dominated by Democrats since the plan was imposed, but then so have state politics in California, with Democrats winning statewide races that are unaffected by redistricting.

Still, Anderson said redistricting is the duty of elected legislators, who know the details of their districts better than anyone. “We doorknock in those districts,” she said. “We know the people. We know the territory. We are the experts on the maps of the state of Minnesota. Handing it to an independent commission that is ripe for corruption is not the route to go.”

In the end, as was expected at the beginning, Schultz was forced withdraw her commission plan, and the underlying language on the principles remained in the mega-omnibus bill, which is unlikely to ever reach the desk of Gov. Mark Dayton.

And yet: That doesn’t mean it won’t reappear in subsequent omnibus bills and become law, which would of course be subject to change by whichever party controls the House and Senate. In 2021.