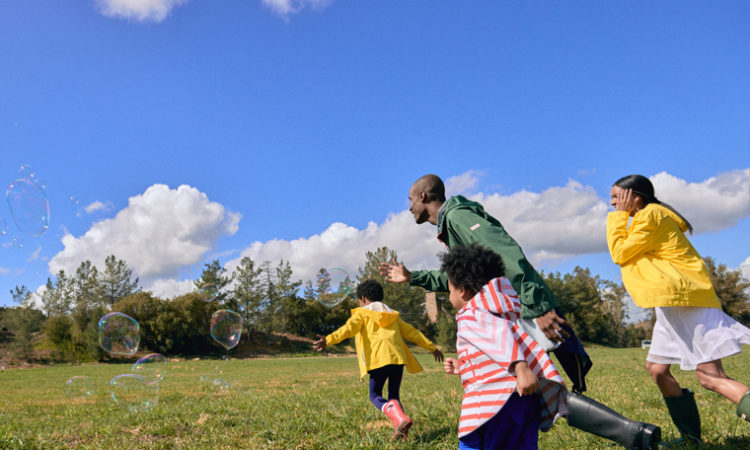 A family running, each wearing a pair of Hunter boots from the Target partnership. ( Photo by Target)

You know what could have shielded Target from this week’s social media storm? Rain boots.

Saturday’s launch of limited-edition lifestyle collection Target x Hunter—based on the British heritage brand best known for its colorful wellies— prompted a lot of buzz over the weekend. But not necessarily the sort of buzz that Target had hoped for.

“Fail” was the hashtag frequently added to tweets about the collection from customers who rushed to stores and online to find that the Target version of Hunter’s iconic tall women’s rain boots was not available. The Minneapolis-based retailer warned customers online the day before the launch that the popular boots would be delayed, but apparently a lot of shoppers didn’t get the message. And based on tweets, neither did some store employees, who directed customers to target.com—to no avail.

Target officials tried to steer the focus to the other 299 items in the collection ranging from bags and coats to coolers—most of which sold out over the weekend. “The tall rain boots for women are actually a really small part of the overall assortment,” says Joshua Thomas, Target’s senior director of communications. “That said, given Hunter is so well known for the style, we pushed out the communication proactively on Friday.”

Was that enough? It’s no secret that the real value for retailers in limited edition partnerships with popular brands is the publicity and cool-by-association factor they generate. So if the headlines and tweets are overwhelmingly negative, even when most of the merchandise is sold out and already appearing on resale sites, is that a win?

“The value of these partnerships can live on for a long time,” says Kelly Olson, founder of Sway PR and Marketing in Minneapolis, and a former senior manager of marketing and publicity for Target. “Even though they have disappointed loyal guests, this is a good indicator that they are still making smart partnership decisions and still have rabid fans looking to them for cheap chic.”

Some disappointment is inevitable with limited edition collaborations—that’s the nature of creating demand. But Target has a history of high profile launches (Missoni, Lily Pulitzer) marred by internal failures, like website crashes.

This time, Target made some mistakes that could have been avoided, says Aaron Keller, co-founder of the Minneapolis branding agency Capsule, and co-author of The Physics of Brand. He points to the collection’s limited availability in stores. “Why limit the locations? That’s something Target does to test an untested brand,” Keller says. “Ask any 17-year-old and she’ll tell you, Hunter is a fully tested brand.”

Target x Hunter was delivered to around 800 of Target’s more than 1,800 stores. Thomas says that’s not unusual for a limited-edition collection. “Given the shift to digital, we prioritized stores where (limited edition collections) have historically done well.”

The fact that Target ran into manufacturing problems with the rain boots could be an unfortunate mishap. But that, Keller says, coupled with the lack of full store rollout for the entire collection “doesn’t look good.”

And of all products to be delayed, the collection’s hero item is especially unfortunate, says Olson. Even though the partnership is intended to be limited, Olson says, Target may have underestimated the actual demand for the boots.

Weary of disappointing customers yet again, Target is not saying when the women’s rain boots will be available. “We apologize for any disappointment and we’ll share more information when we can,” reads a message on Target.com.

“The internal team at Target isn’t getting it right,” Keller says. “Get some idea of the influence these brands hold, measure the energy these brands contain, and consider the implications. We need to see a win, Target. Or just call up Jeff Bezos and make him an offer he can’t refuse.”