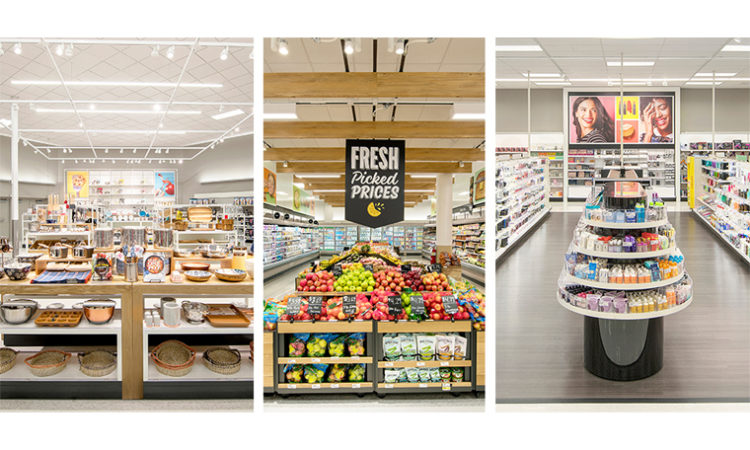 A look at some of the display changes coming to the 28 Target stores this year. ( Photo by Target)

Nineteen of the 28 locations are SuperTargets, which are expected to costs twice as much to upgrade.
By Sam Schaust
March 05, 2018

As part of its multi-year, grand scale plan to modernize its stores, Target said it would spend $250 million on renovations for 28 locations around the Twin Cities area this year.

Remodel work has already begun at several locations. Target CEO Brian Cornell told the Star Tribune that its Nicollet Mall shop, which received a $10 million renovation in 2017, will act as the model design.

This means the Minneapolis-based retailer will be adding more self-checkout lanes and grocery displays to its stores, while also spiffing up its beauty department and placing greater emphasis on online orders with a prominent in-store pickup counter. “Trend spots” will be placed near the entrance to highlight the company’s home goods, clothing and other seasonal items.

Improvements will also be made to the general atmosphere of the 28 stores. New flooring, solar panels LED lighting will be installed at many locations, while the color palette of walls and the surrounding environment will shift toward neutral and slightly away from the company’s iconic red.

The Twin Cities is “one of our most important markets in the entire country,” Target’s senior vice president of properties Mark Schindele told the Star Tribune. “We also have some older SuperTargets here, so it was time for an update.”

Nineteen of the 28 remodels will be of company’s large-scale SuperTarget locations. Target expects the cost to upgrade its SuperTarget stores will be about $10 million, while its smaller stores will cost half as much.

For the locations not currently under construction, remodeling will begin in the next few months and will take between three to five months to complete.

An example of the transformation Target plans to make to its grocery department. (Photo by Target)

In TCB’s September 2017 feature “Target’s $7 Billion Bet,” the company said its remodeling campaign was expected to increase revenue per store by 2 to 4 percent. “We’re putting a big premium on experience, both physically and digitally,” Cornell said at the time.

The stores that are part of Target’s 2018 remodeling plan include: