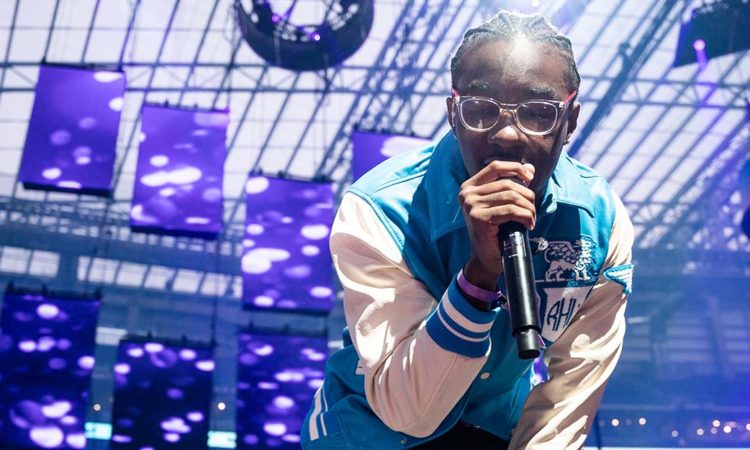 Hip hop artist Fresco Trey performing at VeeCon in Minneapolis in May 2022. Courtesy of VeeCon

You don’t have to be a fan of NFTs to see the value in bringing Web3 trailblazers to Minnesota.
By Allison Kaplan
June 18, 2022

Living in Minnesota, I’ve experienced a lot of weird weather—but nothing like the hail that dropped from the sky one day in May. I was driving on I-94 between our Twin Cities. One minute, I had the windows down; the next, buckets of golf balls had seemingly emptied from the clouds. The plink-plunk on the car roof drowned out the radio.

I was headed to the opening party—the outdoor opening party—for VeeCon, serial entrepreneur Gary Vaynerchuk’s first-of-its-kind Web3 conference, which drew more than 8,000 of his “VeeFriends” NFT holders from all around the globe to U.S. Bank Stadium for three days of talks about the future of how we engage, collect, communicate, and transact on the blockchain. The conference goers would have followed Vaynerchuk anywhere to hear his message, a unique mix of tech futurism, hustle, kindness, and empathy. But as I saw the #VeeCon tweets asking, “Why Minnesota?” I felt a bit defensive.

And then the hail.

By the time I made it to The Commons park near the stadium, however, the clouds had parted and rainbows arched over our downtown as if to say: Do not doubt this state.

The scene was glorious. People of all colors streamed onto the grassy field, with the Minneapolis skyline in the background, going up to strangers and introducing themselves. They enjoyed a “taste of Minnesota” from local food and drink startups. One of the participating brands was Humble Nut Butter; founder John Waller estimates he handed out at least 2,000 samples and met people from six countries who were visiting Minnesota for the first time.

Just a few years ago, Luis Leonardo was the one asking, “Why Minnesota?” A triathlete from Guatemala, he married a Minnesotan who wanted to move home. Leonardo spent the first two years of his Minneapolis residency trying to warm up. “I hated every second of it,” he says. Then he discovered cold therapy. With every ice-cold shower, he noticed himself warming up to life in the north. So, he tried a polar plunge. “It’s the most amazing experience,” he says. “It makes you feel alive.”

A personal trainer, Leonardo invited clients and friends to work out on frozen Cedar Lake and then take an icy plunge. The first time, five people showed up. By week five, there were 80, and a business was born. Today, Embrace North operates out of a Linden Hills storefront offering “fire and ice” subscriptions for sauna and cold plunge.

When VeeCon’s producers—to their credit—went looking for unique Minnesota experiences to incorporate into their welcome party, they discovered Embrace North, and asked Leonardo to bring his mobile sauna to the event. “I’m not into crypto myself,” Leonardo says. But he did know GaryVee, Vaynerchuk’s online persona who encourages his 35 million social media followers to make their own opportunities and go for it.

Death is Certain, But Obituaries Are Ripe for Disruption
A Dent in the Equilibrium
Marketing in the Digital Era
The Risks of Talking Politics at Work

“We had no idea what to expect—we didn’t know how international it would be,” Leonardo says. “It was awesome to show them what we do here in Minnesota.”

Many VeeCon attendees showed up at Embrace North’s Linden Hills studio. That included VeeCon speaker Jesse Itzler, an entrepreneur, author, and endurance athlete (also famous as the husband of Spanx founder Sara Blakely). Itzler actually discovered Embrace North on Instagram months ago and hired Leonardo to lead a polar plunge retreat for some of his friends. Then he ordered an Embrace North sauna for his home in Georgia. Now other orders are pouring in. Embrace North has no ad budget; the traction comes through social media and real-world networking.

VeeCon will likely take place in another city next year. People everywhere will continue to debate the costs and benefits of NFTs. No matter where you stand on it, there’s no denying that something electric happened in Minneapolis that weekend in May, both inside U.S. Bank stadium and out. Restaurants and hotels were buzzing. Startup founders met their entrepreneurial idols. The content of VeeCon panel discussions focused on blockchain and metaverse, but the byproduct was real-life connections.

I bumped into several locals who were taking it all in, including Greg Swan, chief creative and strategy officer for the Social Lights marketing agency in Minneapolis. He agreed: “It was a real-world example of the future of social…. and how Web3 technology is building not just audiences, but communities.”

Be open to learning about things that make your head spin. Show up at the party, even if it doesn’t seem like your crowd. Take the plunge. It might spark an idea, or a relationship, that will count.