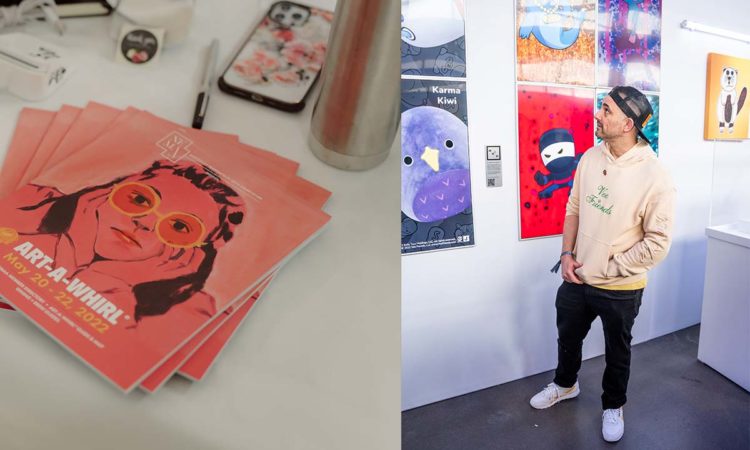 Art-A-Whirl and VeeCon held in tandem in Minneapolis demonstrate the duality between physical and digital art spaces.
By Winter Keefer
May 23, 2022

In our global world, two miles and a river can be all that separates two distinct factions of art enthusiasts with each group remaining virtually unaware of the other’s existence.

This proved true over the weekend in Minneapolis.

As tens of thousands flocked to the city’s Northeast neighborhood for Art-A-Whirl, the largest open gallery tour in the country, nearly 10,000 people from across the globe congregated downtown at U.S. Bank Stadium for VeeCon, the world’s first-ever NFT ticketed conference. And neither group knew the other was in town.

In some sense, both events showcased the same thing: A space for art to be shared and artists to congregate. The big difference: whether or not you believe art should be defined by its existence in the physical world.

While attendees of Art-A-Whirl wandered through more than 60 locations—warehouses, breweries, parking lots—filled with paintings, sculptures, and physical art of all kinds, VeeCon attendees gathered around a glossy stage erected on a football field to discuss more obscure artistic territory. The event’s 100-plus big-name speakers included iconic movie director Spike Lee, who is turning movie stills into NFTs (non-fungible tokens), and entertainers like Snoop Dogg and Pharrell, also touting how art of all kinds can fit in Web3, a space envisioned by many to be the next iteration of the internet powered by blockchain technology and artificial intelligence. U.S. Rep. Tom Emmer, a Republican representing Minnesota’s sixth district in Congress, also made an appearance to discuss the political side of cryptocurrency.

Asked on stage at VeeCon how NFTs have changed his life, Beeple, the digital artist from Wisconsin who shot to fame when one of his works sold for $69 million, said he didn’t use to get asked to speak at events like this one.

Despite the parallels between worlds, the leaders of both Art-A-Whirl and VeeCon had no idea each other’s events were happening in tandem. Surveying many people in both crowds revealed the vast majority of attendees of each were also in the dark about the existence of the other.

VeeCon was not on the radar of Anna Becker, executive director of the Northeast Minneapolis Arts Association, the organization that puts on Art-A-Whirl. Serial entrepreneur and marketing guru Gary Vaynerchuk, known to his 35 million social media followers as GaryVee, said at a Thursday invite-only breakfast that he had no idea Art-A-Whirl was going on, even with it being held a stone’s throw away from the conference he named after himself. VeeCon and the collection of “VeeFriend” NFTs that conference-goers held as tickets have been all-consuming over the past few months, he explained.

Vaynerchuk’s NFT art consists of hand-drawn doodles of characters he named for traits he believes are important to leading a happy and fulfilling life. There’s Positive Porcupine, Caring Camel, and Reliable Rat. Throughout VeeCon, the characters flashed on digital screens that hung above the stage. They were also turned into costumes worn by humans who danced around and posed for endless selfies. Attendees crowded around a merchandise table to buy sweatshirts featuring VeeFriends characters. And Vaynerchuk says this is just the beginning. He aspires to be the Walt Disney of NFTs and told attendees their children will one day wear his “Ambitious Angel” on a backpack. “Competitive Clown,” he told the enthusiastic crowd, “is going to make 7-year-olds cry.”

Vaynerchuk, an avid collector of baseball cards, sneakers, and comic book characters, told a crowd of business leaders at a breakfast on Thursday that “traditional” art—the sort that hangs on walls and sits on mantels— has never appealed to him. NFTs, on the other hand, make sense to him and, he says, have actually made him more interested in physical art. Vaynerchuk says he’s bothered by artists who dismiss or diminish the potential of digital art. He compared it to the persecution his family faced when living in the Soviet Union in the 60s and 70s, where his grandfather was jailed for 10 years just for being Jewish. Vaynerchuk’s family fled the territory that is now Belarus when he was a child.

“The reason I just said all that is I’m so disappointed in human’s capacity to try to suppress the next thing that is going through the same thing they went through. I will never understand it,” he said.

The actual answer to the overlap between physical art and the metaverse, he said, is:  “And, not or.”

But the same people who say art can be anything then “go on completely the other side to hypocrisy” by dismissing NFTs, he said.

He compared the current moment of NFT skepticism to the advent of Canva, a design software tool that many artists shunned when it came out a decade ago, but has since been widely adopted.

The adoption curve: bringing physical art to the digital

Vaynerchuk seemed fixated on the dissonance between many operating in physical art vs. the NFT space, but while exploring dozens of galleries just north of the Mississippi from where VeeCon was held, it was hard to find anyone outright against NFTs or Web3. In fact, it was hard to find many with much knowledge of the crypto and the blockchain world at all. But, of those who did have the knowledge, some were interested in tapping into the technology’s potential, just perhaps not in the exact same way GaryVee is doing it.

In fact, Kelly Groehler, CEO of Alice Riot, a Twin Cities-based art marketing and Web3 integration agency, has already been working with NFTs, but her work focuses on a demographic strikingly underrepresented in both the VeeCon crowd and, historically, in fine art: women. Alice Riot works to help women contemporary artists find financial success through channels beyond the traditional. (Producers of VeeCon, sensitive to the suggestion that men dominated the crowd, pointed out that women were well represented at the conference, from the planning team to marquee speakers like actress Eva Longoria and Huda Beauty founder Huda Kattan, to a booth for World of Women an NFT community celebrating “representation, inclusivity, and equal opportunities for all.”)

In a blog post addressed to those working in the physical art world as they consider entering the metaverse, Groehler outlines the reasons many are opposed to using crypto technology for their art: environmental impact, accessibility, equity.

“The good news is that most of the problems with blockchain, crypto and the emerging virtual art world – financial, social and environmental – are not insurmountable,” she writes. “It comes down to our technology choices and being intentional with principles that put purpose, people and planet first. Can that sound like corporate speak? A bit. But it’s spot on.”

Groehler walked through the Northrup King Building in Northeast Minneapolis an hour before the start of Art-A-Whirl Friday. Despite being an avid believer in Web3 with a deep respect for GaryVee, the CEO said she wouldn’t have gone to VeeCon even if it didn’t overlap Art-A-Whirl.

She agrees with Vaynerchuk that art in traditional and new mediums should be an “and” rather than an “or” and also acknowledged that the art world is notoriously slow at the adoption curve for new technology.

“If you think about the changes that are happening in the traditional art world, they were patting themselves on the back in 2020 for finally getting on board with online auctions,” Groehler said. “It is an incredibly slow industry to adopt technology.”

The potential practical application of the blockchain is not as nebulous as it seems, Groheler said. From the fine art standpoint, NFTs can simply act as a form of digital ledger that serves as a certificate of authenticity for an original work of art or as a digital limited-edition print that can be sold and traded. A smart contract is built into the art NFT’s data, ensuring an artist is recognized as the creator of their work. An NFT may also list the commission the artist earns for an initial sale and establish any royalties that are received each time the work and/or the NFT is resold on the secondary market.

NFT art must include people from the traditional art world who have been working to make it a better traditional art world for women artists, for artists of color, Groehler said. “They have got to get in here and start tinkering with things and pushing back on some of these definitions for art. The tipping point, we haven’t reached it yet and it’s going to take a while to get there.”

Groehler has put her own advice around NFTs into action. Most recently, Alice Riot launched the Mina NFT. Members of ArtTable, an organization dedicated to advancing the leadership of women in the visual arts, can purchase these NFTs on The Blue Marble, a social impact-focused NFT marketplace built on the Stellar platform. Stellar accepts all currencies, both traditional and crypto, for the purchase and trading of NFTs. Notably Stellar provides options for near-zero carbon impact on transactions.

“Right now it’s like Facebook and Twitter were back in the day when we all were like ‘What will we do with this? Is this a fad? Should we take this seriously?’” Groehler said, once again echoing points similar to Vaynerchuk’s.

Chris Phillips – an AI artist who goes by the name Xrispy “like a Krispy Cream donut but with an ‘X’ insted of ‘K’” – said he’s been interested in NFTs since 2017 or 2018, when the technology started emerging.

“The concept just made sense,” he said. “I just saw it as a digital box to put any digital piece inside of and ship it to the world, at the time.”

Phillips creates digital art using programing and coding. For example, one of his pieces pulls images of space from the Hubble telescope. His code compiles the images and swirls them together, creating “new space that you can’t actually exist in.”

“I’m creating a new space in the virtual space for us humans to experience, and that to me is expression with modern technology,” he said.

During VeeCon, the 34-year-old California native was able to see this universe come to life in the real world through a digital canvas created by WHIM, a company that also attended VeeCon.

When asked “What is art?” Phillips, like many artists, struggles to form a clear answer. Art is subjective, he noted.

“To me, design is communication and art is just expression. That’s it. I know that sounds very basic but, as Gary shows you, a napkin sketch can be art, or as Jeff Koons shows, you can use materials that are hard to find and create self expression through those mediums.”

Then there are generative artists like Phillips introducing new technologies and new mediums.
“It’s to push the envelope of self-expression,” he said.